In making this as authoritative as possible I’ve ‘farmed’ every possible recipe and legendary crafting materials including a frustrating few like the Gimmering Gemstone that I’ll never need (having preciously made the Staff of Herding). As such this guide is from a genuine players point of view – as opposed to a few pages of text lifted from forums and wiki’s.

I’ll cover level 12 plans first as these are the ones most will want. I’ve had three drop in the space on minutes on ‘normal’ (two of which were green sets) and one drop after hours of Rifts, so it’s unlikely that the difficulty setting applies to plans in the same way it does to all other legendary items. I should also note that I obtained many of these early on in the expansion – before the 2.04 patch which "greatly increased the drop rate for plans". The more you play (and that’s common sense, not a directive!) the more likely you are to get the plans you need.

Strangely, I’ve found, you are actually more likely to get a green set recipe like Asheara’s Vestments than you are to discover a legendary one for a single weapon or armour piece. Conversely, the more recipes you find, the more likely you are to get the one you need as recipes don’t repeat – once learned. If you’ve only trained the blacksmith or jeweller to a certain level you risk getting duplicate plans. Rather an incentive to level up Haedrig, Shen and Myriam sooner rather than later, eh!

If you want my advice, which I assume you do as you are here reading this, then the absolute best use of your time is to join ‘split farming’ parties doing act 1 bounties on ‘normal’ difficulty. They tend to be very fast – typically just five minutes, accrue rift fragments and give you a chance of getting legendaries like the Ring of Royal Grandeur which most consider the most useful item in the game. You can join other acts or use higher levels, but it’s not as efficient.

That’s top level plans. If you need older designs, certainly likely if you are a completist, then it gets a little more problematic as Blizzard, in their infinite wisdom, decreed that high level character can’t get them. If only it was that simple! I can’t say absolutely on this but I tested as thoroughly as possible and spoke to many in channels that substantiate my finding. The windows for plans dropping is tiny and given how fast you gain levels is makes it doubly hard as level 10 plans only drop for characters between level 55 and 60. If you don’t have the expansion it’s academic, but for everyone else it means starting an character and leveling them to 55 and … It gets tedious fast, as you can imagine. There is help at hand though!

Enter the merchant Dane Bright. He’s annoyingly hard to find as, while he’s in an easy to search area (Northern Highlands), he doesn’t actually load very often. You might be lucky and find him first try – or you might equally give up after running round the same zone for the hundredth time. RNG is a fickle mistress. Once found he will sell you a low level plan for around 5,000g. Note the word ‘a’. If you buy it and wait 15 minutes he will offer another, which you have to buy if you want him to restock. Unfortunately, unlike drops, he’s a vendor so you can get duplicates and the more recipes you’ve learned, the harder it becomes not to get repeats. There is an upside to this at least. These older recipes are not bound to accounts and so can be traded with other collectors. Be sure to search for the active Dane Bright communities, like the couple I’ve shown below. 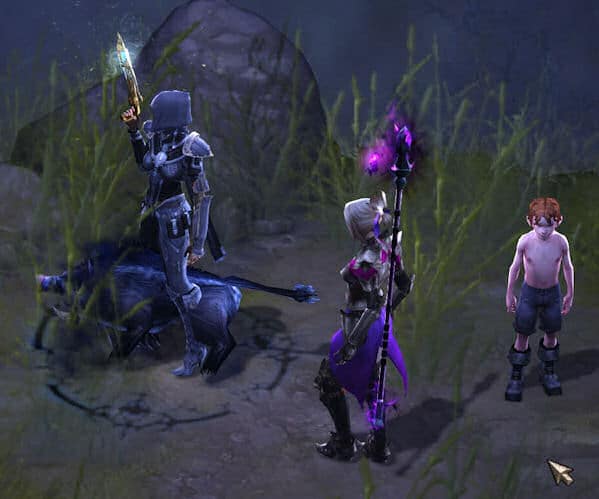 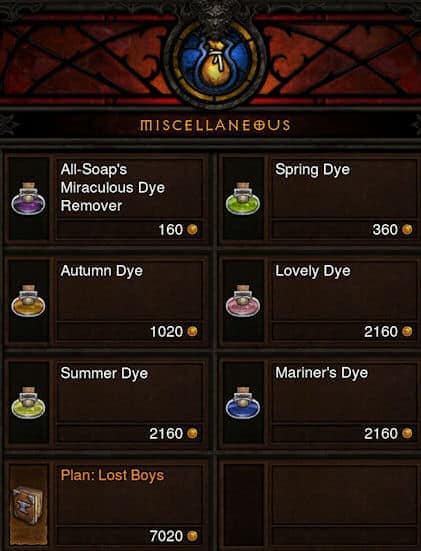 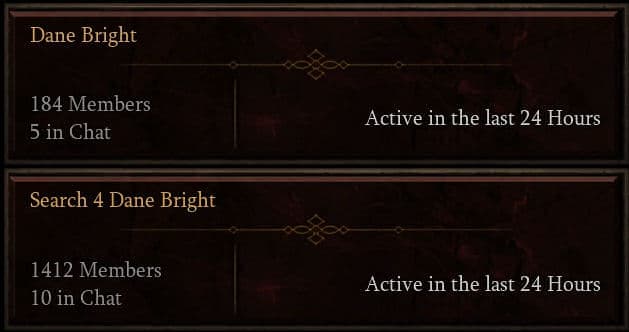 Once you have the plans you need you can start farming some of the many materials available for crafting, though there’s no reason not to do both.

It should be noted that these materials can drop when doing normal bounties, you don’t need to Torment yourself to get them if you don’t want. My first recommendation is you look at Horadric Cache items of particular use to your character(s) and join parties farming split farming that act. They run fast so look at the map, see which if any of the bounties are (or will be) good for you and jump to it.

Legendary crafted items are meant to be both a stepping stone into end game items and a good place to spend crafting materials at the end game. While we like the fantasy of having the unique crafting materials, obtaining them was either keeping too many people from being able to complete the recipes in a timely manner or encouraging game flipping and similar less than ideal patterns of play in order to acquire them. As such, we are removing the requirement for unique items when crafting Legendaries.

The change has made most of this article obsolete – instead of specific monsters for legendaries you’ll have to farm a lot of lower level instances for blue items to salvage!

I was recently accused (rightly in that instance) of being arrogant and at the risk of sounding arrogant again I have to say Blizzard got this completely wrong and they should have asked me! Honestly Blizzard, if you are doing me the honour of following my thoughts, do yourselves a favour and give me a consultancy post!

As it stood, as I pointed out repeatedly in places in this set of articles, the farming aspect for this was all out of whack. It wasn’t wrong as such, just unbalanced. Once more I am surprised at the lack of foresight and common sense from them. So, what would I have done to solve the situation and, as much as possible, keep everyone happy? It’s obvious – return the legendary component with the Forgotten Soul when you salvage! That way they would have kept the system they liked, kept players looking in new places for them and saved a lot of rehacking of code to remove the items and the crafting aspects. Ah well. How much would doing that had saved you, Blizzard?

My revised legendary mats stash – prior to vendoring for about 12,000,000 gold and freeing up a lot of bag space – now looks like this:

First a word on drop rates for materials

There is a noticeable jump in difficulty from normal to torment 1 but not vast if you are decently geared. By Torment 3 it’s getting slower and harder. By T6 it’s ridiculously hard to kill anything. In fact – and I firmly believe this is currently an imbalance in the game mechanics – it’s easier to kill a group of elites than a few regular creatures and given said white labelled mobs can inherit the attacks of the nearest elites it can get rather silly, especially if you are with the type of player that speeds through an instance to get only to the rare mobs – and pulls a horde of lesser evils in their wake. Using skills and tactics to beat a boss is fun – getting spam killed by a dozen white trash that inherit frozen and arcane sentry is not!

In going from normal to T1 you double the chance of a good drop but mobs take 8 times longer to kill and hit 4 times harder.

By T3, from normal, the chance of a good drop has now trebled but creatures need 20 times much damage to kill and hit back 8 times harder. By now you are far more likely to die from white trash that blues, yellows or purples – especially if they are archers.

By T6 the same creatures are now 86 times tougher and hit 25 times harder, but the reward is up to 77%. Huzzah!

BUT, that’s NOT a 77% guarantee of a drop – that’s a 77% better than normal and if normal is a 0.1 chance of getting a legendary item, at T6 the chance is still merely 0.177 but everything is 80 times harder to kill. Yes, in Rifts you see people regularly getting 3,4 even 6 legendaries for a full run – but can can also see people getting none. Just an observation, but one backed up by comments in blues posts, it appears that the rates for crafting materials are set individually, not globally, though rarity and ease of reaching of the monster in question make a far greater difference. Overall, if you do the maths, the chance of getting good drops are better at lower levels because of speed.

A different topic but worth a note – rifts increase the drop rate for legendaries somewhat but the scale for difficulty is otherwise similar. Recent changes in the game, including a doubling of drop rates for legendaries skews things but keep a balance in all things.

Here’s my rule of thumb for the difficulty you should be playing at:

1) You can kill a treasure goblin before it escapes.
Naturally some classes like Demon Hunters and Wizards have a great advantage in this, so if this is you it applies even more!

2) You can complete chest quests in time.
This falls into two categories – champions and masses. For the first you typically have 30 seconds to kill a small group of elite mobs, for the latter you have to kill 100 mobs, or five waves of mobs. If you cannot do this you are under-geared for the level you are in.

3) You don’t die when things get hairy!
In fairness this usually means you have amulets like Countess Julia’s Cameo that gives immunity to arcane sentries, or similar gear, but it also means having the right balance of skills to fight and to heal.
If you want boosting look into ‘rift it forward‘ where high level players don’t care if you die instantly, as long as you open the next rift for them. (This is actually a great way for getting gold, levelling, getting forgotten souls for crafting and works well for those doing normal Horadric Cache bounty farming)

Unless you are after green set items (or farming experience) it is far more efficient to get in parties that split up in normal, take an act each and pile up Horadric Caches – or bounty bags as some like to call them – which include some desirable and exclusive legendaries.

Note: While not part of this article I will point out that you can now get nearly all legendaries – including set pieces – from Kadala – if you spend enough blood shards. This fits in well with normal bounty farming and rift forwarding. Note also that legendary components do drop at all levels once you hit 70, as shown by the difficulty chart further up the page. 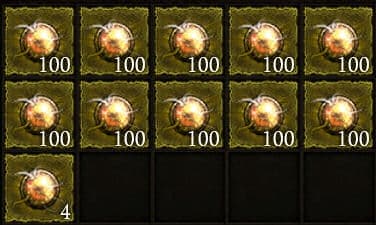