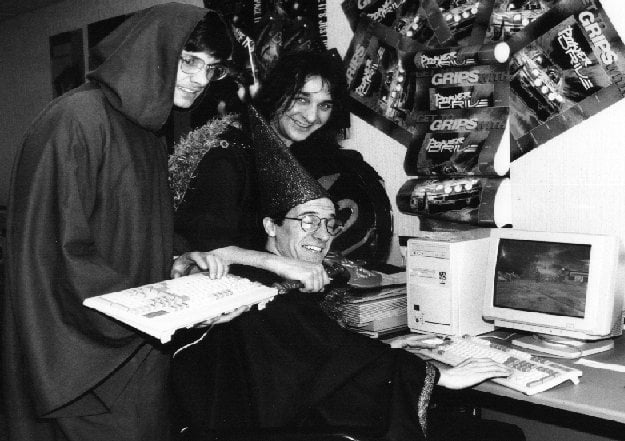 Ackadia, as a name, is derivative of my surname and Arcadia.

Why does it cover such a wide range?

Basically, these are my main interests. I could split them up into multiple sites and monetise them but that’s not what Ackadia is about. On any given day I’m as likely to be reading Marcus Aurelius, Terry Pratchett or even Duncan Bannatyne as I am to be bingeing on Netflix or playing computer games. I think I’d have made a great Renaissance polymath

. Anyway, as a result, I write about whatever passion, gripe or obsession fires me up enough to drag me away from my books, studies and other addictions!

I do tend to bounce around, a lot, but, health allowing, my current (2021+) interests, activities, and ‘to-do’ lists include:

Finishing Honours degree in cloud computing and pondering what else, if anything, I want to pursue academically.

Game development (Unity and C#)
(Projects on the board include a strategy game, a platform game, a team paddling game, a hedgehog game (factual, NOT sonic-like), a mining game, an anti-hero Goth vampire zombie romp, and a couple of 3D solo/multi-players RPGs. Might take a while for that lot, but I’m re-using a lot of stuff written over 40 years, and coding these days is a lot of drag and drop, so not as big a challenge as it appears.)

Reading/re-reading some of the thousands of books I hoard, and reluctantly letting some go to new homes – so I can fit new books in the house.

Learning to draw (that’s been on the to-do for over 50 years!)

I had earlier sites, under ‘Nordic Systems’, but this site was started around 1998 after health and other issues resulted in me selling my computer business (to pay off some of a bankruptcy. Ahem!), giving up work and effectively retiring. Gave me a lot of free time to relax and find something new to do.

(Being told you might have only a few months to live does rather tend to adjust your perspectives. At the time it was thought I had MND but it turned out I only have a lesser related degenerative neural condition, a complex form of HSP. You can add chronic depression, kidney failure, pulmonary embolism, a (possible) brain aneurysm and other ticks to ‘life experiences you can do without’.)

What does all that mean for visitors?

Pretty much, what you see is what you get. Anything I put down is based on first-hand experience and or a fair amount of research, preferably from books and journals rather than simply cut and pasted from elsewhere. Not always quite so true, but close enough to be so.

For instance, I was working on (and will return to) an “On this day” section, with typical entries like Feb 11th. My prime source for it is indeed Wikipedia, but that is just the starting point. For those posts, each can take 5 or 6 hours as I refer to and cross-reference between a list of around 60+ primary and specialist websites, a shelf of books*, National Geographic and the latest version of Encyclopaedia Britannica.

*(In fact at one point I had well over 7,500 books, mostly factual, though space and other considerations mean it’s down to a mere 1,500 or so now.

Still, if you include public library and college books, I’ve probably read over 10,000 since I was a child.)

History: Writing about what you know.

At one time or another, I’ve done everything from being a toilet cleaner on a trailer park to a machinist in a Canadian furniture factory, from a laboratory technician (a couple of times) to no end of labouring and factory jobs. Add to that a variety of temping clerical and data entry/management positions with establishments like the NHS and BNFL and I pretty much lost count around 30! Suffice to say if I write about computers or web design, it’s backed up by decades of ‘been there, done that’.

As mentioned elsewhere, I was an approved, authorised dealer/ reseller/ partner for a number of major companies in the ’90s, including Apple, Mitsubishi, HP, Microsoft, Creative Labs and Seagate. Though primarily a local company, I also specialised in fonts and had orders as far afield as Manila, Israel, Egypt and even Bucharest’s embassy, with customers for these typefaces and for computer systems ranging from the local council to network giants like Telindus, BT and the BBC!

I was using BBS’s long before the Internet as we know it was born and, though it was not called as such, had an Internet cafe back in 1995. As well as offering CAD/Autodesk rending services and selling vast numbers of floppy disks to students, we sold AOL and Compuserve access via dial-up while they checked email, drank coffee and waited for me to rescue their assignments from viruses – again! So, whether it’s system support, networking, programming, SEO or even lesser-known niches like vinyl sign-writing, one time on another, I’ve done it, or at least dabbled a little.

Similarly for games, my interests and activities span from writing crosswords and designing board games, across tabletop RPG’s, through helping with text MMO’s, to way, way too many hours playing the likes of Farmville, Guild Wars and Warcraft. There was even a time when I was on first name terms with Games Workshop’s Ian Livingstone and even bumped into Gary Gygax once! (Well, his burly minders at any rate, but it counts, just!

For psychology, mental health and depression posts, these are generally from a personal perspective and should not be considered a replacement or alternative for seeing your GP and/or being referred to a qualified psychologist/psychiatrist. That said, I studied forensic psychology at university, so it’s not all simply opinions, I do try to throw a little science in, sometimes. The idea is more that it helps people, if they can relate, and, perhaps, points them in the right direction.