I wouldn’t touch Netgear’s WNDR3300 wireless router with a bargepole.

First off, unlike the DG834N Rangemax, this one has no modem – you have to connect it to an existing ADSL/cable modem.

Thirdly, while it promises:

It really fails to deliver.

What it failed to mention is that unless you pair it up to a Netgear WNDA3100 the signal downgrades itself to 802.11g – and a really bad signal at that.

Naturally I called tech support – where a British male voice give the the automated options to transfer to a ear-bending American woman’s voice  giving me the same options again… before summarily transferring me to some call centre in India. The second time I tried I managed to get someone I could actually understand, some of the time, though he struggled with my Lancashire accent. Did not put me in a good mood.

Adding insult to insult, it conflicts with Microsoft’s 8000 bluetooth keyboard and mouse, had to unplug them and go back to ps2 and USB ones.

According to Netgear’s System Requirements…

Well, someone needs to tell the WN311B that, because it doesn’t want to know! Some ‘upgrade’ eh!

Needless to say I’m sending this junk back.

Read this review on CNET and see what I mean:

It’s a basic router with two separate access points (AP), one of which supports Wireless-N and can operate in either 2.4GHz or 5GHz frequencies–similar to the D-Link DGL-4500 –while the other is a regular 802.11G 2.4GHz-only AP. The result is that when in dual-band mode the router is able to offer Wireless-N only in the 5Ghz frequency, while the 2.4Ghz frequency is maxed out at the 802.11G speed.

That’s the best I could get after several hours of trying all the wireless options – a poxy 11Mb/s with a 802.11g

Network Stumbler have me a miserable 82dBm signl/noise ratio – the other network is a few houses away and still manages a signal/ratio of 87. With the (old) DG836G I get about 60 and 35Mb/s

Adds a few other grabs… 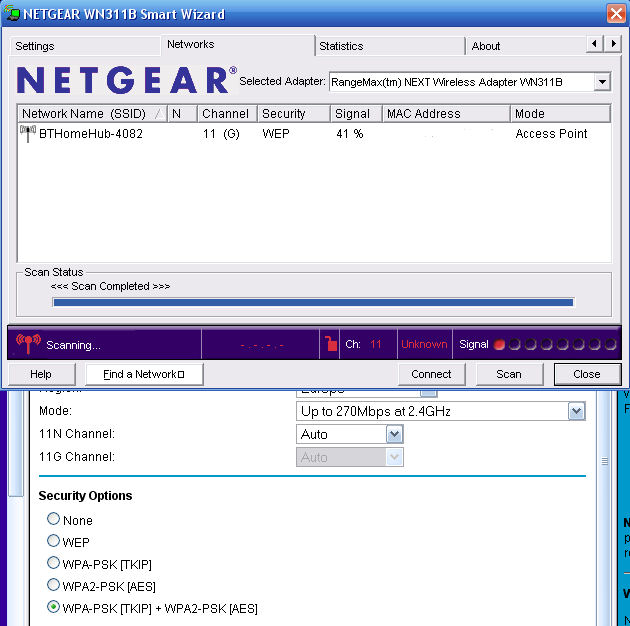 But not, apparently their WN311B models, as the Ackadia SSID disappears off the map :/

Needless to say the setting for ‘Up to 130Mbps at 2.4GHz’ is similarly dismal.

Meh! As I say, don’t touch this piece of junk with a bargepole, it’s a complete waste of money!

This piece of junk doesn’t work!

What is Netgear and your own copy fails to mention is that it’s not actually dual-band, apparently it is a basic router with two separate access points (AP), one of which supports Wireless-N and can (supposedly) operate in either 2.4GHz or 5GHz frequencies while the other is a regular 802.11G 2.4GHz-only AP. The result is that when in dual-band mode the router is able to offer Wireless-N only in the 5Ghz frequency, while the 2.4Ghz frequency is maxed out at the 802.11G speed.

– and doesn’t transmit, no signal, nothing, nada, zip.

and even then it’s a at best a poor signal offering 11Mb/s. I get a lot better with the old DG834G it’s meant to replace.

I was tempted to say sod it and buy a NetGear RangeMax Wireless-N USB 2.0 Adapter to pair up to it but the old adage of throwing good money after bad comes to mind.

Adding insult to injury, I did have a DG834N – that just failed after only 18 months – when I opened it up one of the antennae had fallen off and a second had never even been fitted!!!

It may be that it’s faulty too, I can’t say for sure, but it’s certainly not fit for its purpose.