I’ve had my previous case for over a decade and felt is was time to change. The old chassis is a massive, solidly built 1mm steel Supermicro SC750 server case that’s still good enough to hold its own, though it’s been through a few fans and power supply in that time, and more motherboards that I can count. Certainly at least half a dozen generations. (And yes, that is an old 5 1/4″ drive and tape streamer in with the rest!) 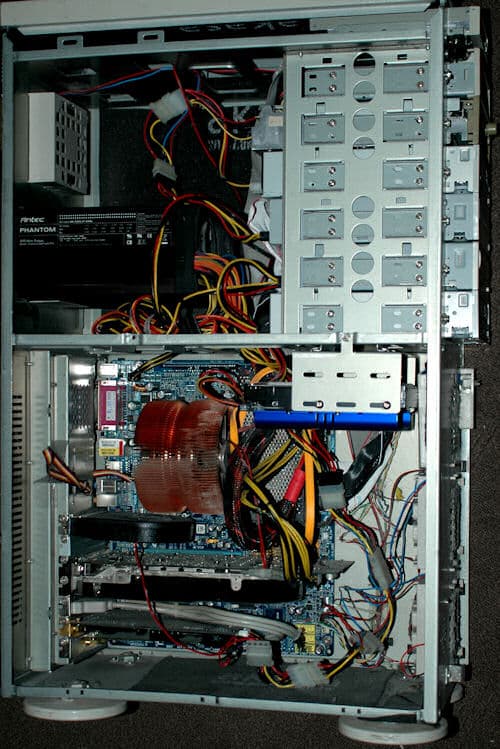 Good as it is, it was never intended for an age of megawatt games and graphics machines. The Enermax Galaxy 1000W wouldn’t even fit in the old one, and a good many new designs too, I’ll wager. Might now look like it from the image below, but you need about 12″ – 30cm – clear to fit this inside a system case. Big as my old server case was, it simply wouldn’t fit. 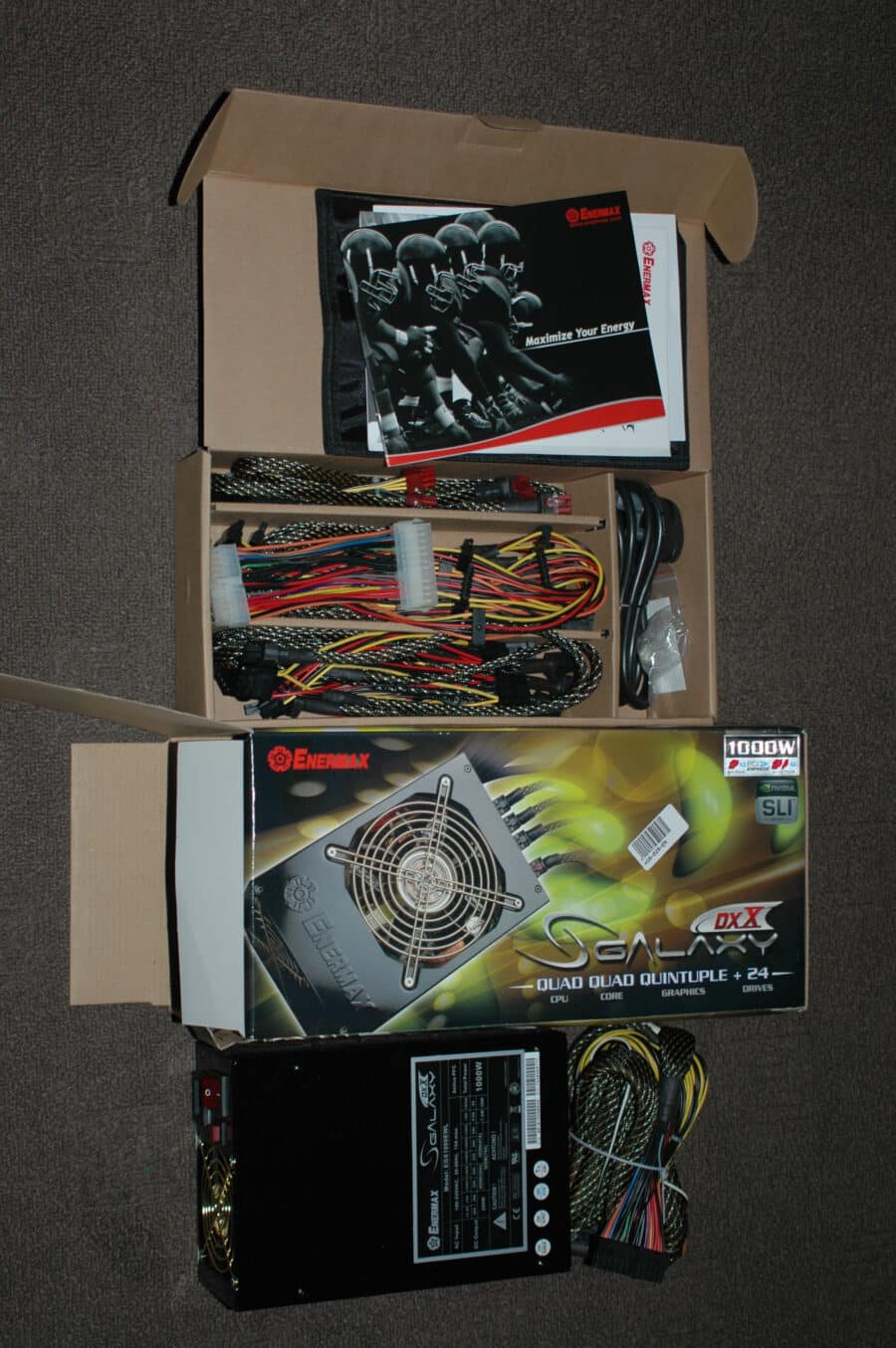 Open the box and it’s sat there, wrapped in a branded brown cloth bag.  Obviously aimed at gamers taking the base unit to LAN parties, but it tickled me. My wife liked it to – she snaffled it as a spare laundry bag! Taking it out is was noticeably lighter than my old Supermicro, but being made with plastic and aluminium instead of steel I imagine it would be, you can barely lift that one, let alone lug it to a LAN meeting…

It shorter in height by several inches, but longer and wider, the power supply housed at the base of the unit – one of the reasons I chose this model actually. 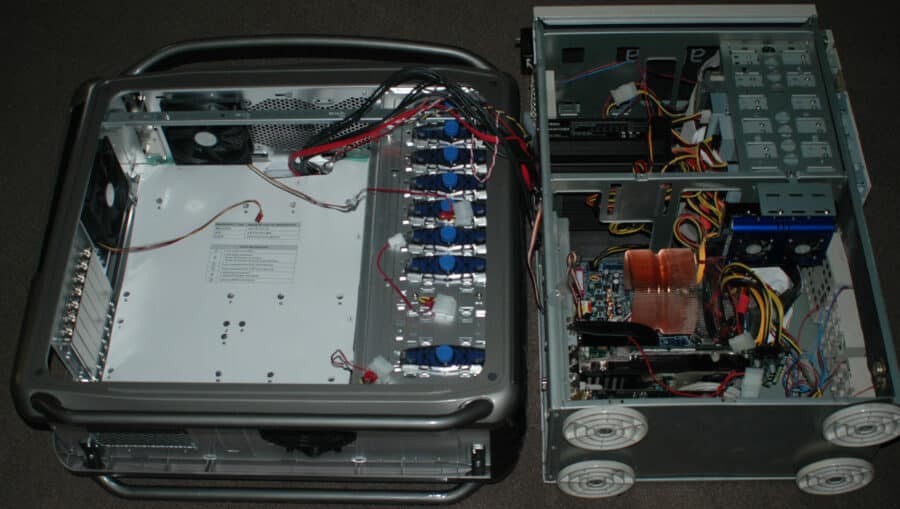 Opening it up was literally a seconds work. Flick a catch and the side panel lifts out. There was a paper template taped inside too, detailing the screw positions for ATX etc. A trivial thing but I like attentions like that.

Fitting DVD’s etc is easy one, once you catch onto the process, but seems too fragile for my liking. Push a button and two small pins retract/emerge, allowing you to lock the device in place. Works like a charm, as I say, but I am sure anyone that’s careless or ham-fisted would have no problems using too much force and shearing the pins off.

Long story short, built it up, plugged it in, got typing. No problems, no nasty surprise, just the whirr of the fans and an irritating rattle of the case. Ummm!

The other reason I upgraded was because the other one had cooling issues, it was too cramped for all the cables and cards, even with the smaller 600w Antec Phantom. Still, not greatly impressed in this respect. A lot of reviews claims it is whisper quiet, but I’ve got good hearing and it’s still louder than I’d like.

The last one had half a dozen system fans, another on the memory and another on the hard drive.  I left out the small slot one on the motherboard, and the harddrive one wouldn’t fit. This just has three large fans and one of them – the top one I think – is vibrating the case – and it’s no quieter for losing 3 fans!

I do think it’s running cooler for all that as the air is circulating better, but I’ll have to take another look in the morning and sort out the rattling, it will annoy me no end otherwise. Tomorrow I’ll add the photo’s I took, give you an idea. 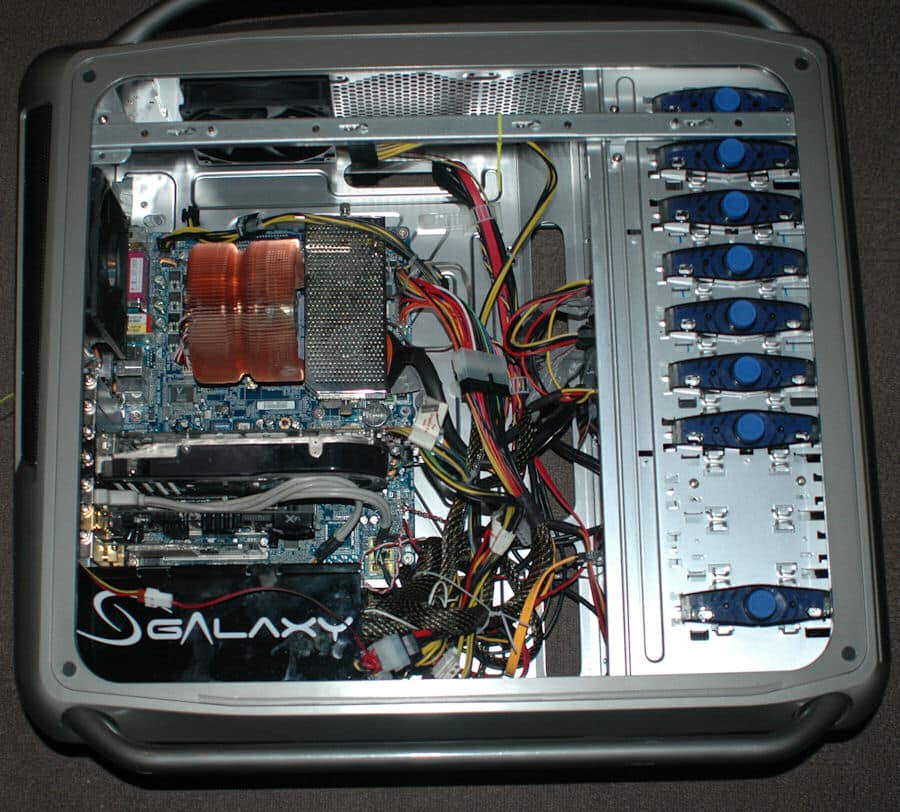 Still not uploaded the photo’s, (done now, obviously) but I found the problem – it was nothing to do with the case at all (blush). In moving the motherboard across the OCZ fans on the DDR memory decided to go play up after a year or two of being faultless . Just took the thing off and tossed it out. Problem solved.