Actually I’m quite a fan of the Dummies range which can be quite enlightening at times. The sometimes irreverent cartoons are always good too.

One thing that intrigued me though was the topics covered. Protocols and topologies, yep, sure, but installing a network card? That in itself is a bit strange; if you are spending a few thousand pound on a server-based network you should be seriously au fait with the hardware side. The curious thing was it included coverage of archaic buses like EISA and VL-Bus, both of which became obsolete in the mid 90’s, a few years before W2K was even released. I assume current reprints correct this but even so, waste of good paper in my opinion!

The rest of it is OK mind. It wouldn’t get you through an MCSE by any stretch of the imagination, but it’s a good starting point. For me though, I reckon the book should have been dedicated to the name in its title – Windows 2000 Server. As it was almost half the tome was given over to networking fundamentals, most if not all of which is duplicated in “Networking for Dummies”. The half that bothers to cover W2K is OK but I still felt cheated. For all these reasons I’ll only give it bare 4/10.

Footnote: If the publishers are reading this… A chapter about handling SNAFU’s?
Watches the English look up the dictionary definition and coughs loudly! 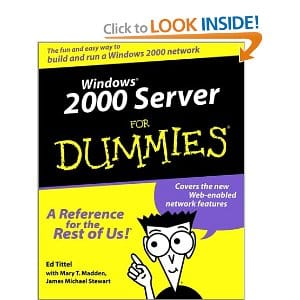