Do you conform to the narrative?

This is a general question and applies equally to barmy TV plots, politics, religions, media ‘guidance’ and the madness of the ‘woke’ left.

Do you go along with what you are told because it’s the easiest path?

Why are you getting annoyed? It’s only a film.

Just ignore them, it’s not worth getting into an argument over.

Who decides the narrative, and why. Is it laziness, convenience, or something more sinister?

There’s a quote I recently heard, one I’ve always known and understood, but never actually read before.

Delusion held by one person is a mental illness, held by a few is a cult, held by many is a religion.

I have written about this a few times in the past, but it bears reiterating as it applies to so many other things.

A word on ‘faith’

If I believed that – truly believed – that when I die a Norse Valkyrie will take me to Valhalla, it would be a delusion, a psychosis. If I decided to help this happy event along I could and probably would be forcibly detained ‘for my own good’. Psychiatrists would be attributing mental illness, asking if I see or hear things, and doodling ‘schizophrenia’ in their notes.

Regular people, ‘normal’ people would be more likely to mock me and call me a ‘nutter’.

If I was part of a group of people lead to believe that on this day, in this place, aliens would come down to Earth and take us to the happy place, we’d be a wacko cult. If we further believed that to board the spaceship we had to die, to pass across in incorporeal form, you’d have yet another death cult. Police etc. would be involved. Mass psychosis would be attributed. The victims would be described as weak-willed followers of a controlling, domineering, and mentally deranged leader.

Regular people, ‘normal’ people would sigh, be at a loss that so many got taken in. Others would mock, gloat that there are “a few less nutters about”.

However, if the masses, if millions or even billions of people were lead to believe…

See, that’s a problem, because those ARE the regular people, ‘normal’ people, and anyone that tries to argue that they (the majority) are delusional is the outsider, a crank, a non-believer.

Ever noticed but how readily the religious leaders are to vilify, to eradicate any who disagree with their narrative? The language they use, the terms they invent. Words to help to control, to manipulate, to incite the masses.

Burn the heretic!
Death to the blasphemer!
Kill the apostate!

You only have to look into the likes of the Church of Scientology, how eager they are to lawyer up, and how they allegedly hound any that attempt to escape its clutches.

Then you can add in the eternal religious wars – the conflicts over whose delusion is the real delusion.

Getting the ‘right’ message across

Similarly so in politics, as in America where Trump supporters still believe their beloved leader, the ‘chosen one’ was cheated out of his post.

Or in the UK where ‘remainers’ are still fighting against Brexit. Or, as in a recent widely shared story, some are claiming to be intimidated – even traumatised – after seeing the Union Jack on food products.

Their own national flag offends them, yet – presumably – products with the EU flag emblazoned on them are fine, it seems. Narratives, again.

For our North American cousins, this would be like campaigning against Walmart or Costco for selling products bearing a maple leaf or the slogan ‘Made in America’.

They have been so brainwashed by media and by academic and corporate pro-EU cultures that they genuinely hate and despise their own country – but only enough to write and complain, not to leave.

I could pick on Islam, on Muslims, on suicide bombers… but that would be contentious, racist, antagonistic. Even hate speech! Because that’s the narrative.

So I won’t, I’ll pick on Christians, ‘cos they are less likely to bomb a train, a church or a school full of kids. They aren’t likely to wage centuries-long crusades, burn people alive, torture anyone who disagreed with their delusions, or whose land and property they wanted.

Or did they? Did they do it in the pursuit of spreading god’s love, god’s message? Or was it in pursuit of wealth and power? The masses cowed by the zealots, who were deluded by the people with the narrative. Ever think about that?

Have you ever looked into how much ‘the church’ is worth? We don’t know, it’s a secret – they don’t pay tax and don’t have to file accounts, yet are said to have an operating budget of perhaps $170 billion a year. They are tied to Rothchild’s bank and have big investments in banking, insurance, chemicals, steel, construction, real estate, are said to have substantial gold reserves. Other churches and religious groups are also worth staggering amounts of money. You may also be interested to note that it is Western capitalist religions that are the wealthiest.

(e.g. How Rich Is the Catholic Church? )

Delusions are lucrative if you are the one controlling them, eh.

Back to the story

Besides being in a funny mood because of lousy grades for papers that didn’t fit in with the universities narrative, what set me off thinking today was episodes of the Marvel x-men derived series, Gifted. Narratives.

It’s a decent enough binge-watch series if a bit barmy at times. Sometimes it’s silly, ‘cos it just is, sometimes it’s silly because of lazy writing, and sometimes, well, it’s just idiotic because they twist it to fit the narrative, to make it more exciting, to direct the flow of the stories.

In one episode, the shadowy ‘Inner Circle’ are said to have scores of dummy holding and shell accounts, typically holding over $55 million in each. So much money they pay a power plant manager $10 million in cash to go along with a plan – instead of just compelling him. These are psychopaths that kill as it suits them.

In the next episode, they are robbing a bank, because they need the money! This bank – including all the customers’ savings and deposits – has some $100 million to be emptied out. In reality, banks have a lot of assets. HSBC in America has $200 billion in assets, JPMorgan Chase has $3 trillion. $100 is chump money in the great scheme of big business, you can pay more for a private jet!

To make it even sillier, the bank’s computer terminal is in the vault, behind a massive several foot thick adamantium door, weighing several tonnes. If you follow the X-Men they used most of the world’s adamantium to coat Wolverine’s bones – and here’s this door, using tonnes of it!

Creating even a small amount of Adamantium is astronomically expensive

The narrative is “we need a long, convoluted, multi-episode story”, but it makes no sense if you look at it critically.

Believe what you want

Prior to this one of the mutants, aided by cloned telepaths armed with hand-guns, used her powers to kill the entire inner council, presumably comprising of some of the most powerful mutants on the planet. So, ruthless, right. 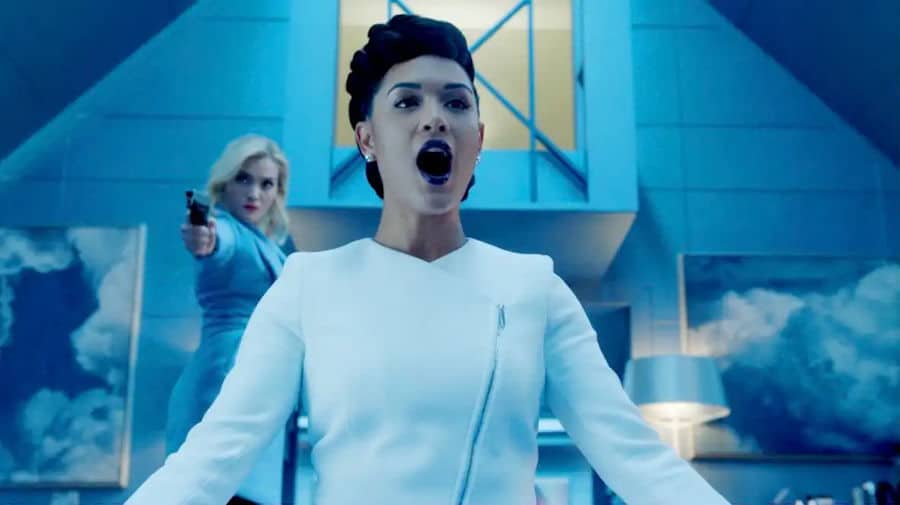 At the end of the bank heist, she stands by, limply saying “Don’t do that, dear, it’s naughty” while a psychotic teenager turns a roomful of innocents into mulch. The narrative served, the plot continues, chases ensue, cities burn. Chaos, allowing for more implausible plot twists, of course.

All the leader had to do was ‘shout’ to stop the kid, or get one of the cloned telepaths to stop her, or any one of the other powerful mutants. Did I mention the leader’s boyfriend was one of the people turned inside out?

There were sub-plots within this, leading up the series finale, equally as daft.

Remember the guy paid $10 million for a favour? They compelled him to commit suicide in the following episode, so another silly narrative.

Anyway, several episodes were all leading up to this group taking over a sub-power station in Washington DC. Compelling guards, creating a drama, reinforcing the place. All so one mutant (Magneto’s daughter) could have a baby in a safe place. Hence all the concrete etc. The narrative is fulfilled, in her labour pains, she blows out all the power in Washington, creating more drama.

There’s a story about NASA and Russian Cosmonauts, one agency spent millions designing a pen that would work in space, the other took pencils…

All they had to do was take the woman to a cabin in the woods, well away from masses of metal and power cables and from the government agencies and fanatics hunting them. But that wouldn’t fill the plot and they couldn’t think up a better one.

You could argue in favour of such plots, but series one had over 3 millions viewers. By season 2 it was down to 2 million. Season 3 was cancelled.

Remember, whether it’s a TV series, a religious leader, or a politician when they start spinning their delusional narratives, they are not doing it for your benefit, but for theirs.

It’s you liked (or loathed!) that, there’s more like it here, from over the years, such as the following. Expect contention!