A look at the Diablo III revamps in season 23, which adds emanate to your follower, making solo farming easier and better.

Follower System Revamp: The Follower system for Diablo III has been revamped and will be made permanently available for Seasonal and Non-Seasonal play!

…Emanate allows the player to gain the intended effect of certain Legendary Powers and Set Bonuses when equipped on the hired Follower.

Reroll for main stat or else damage (crit, AOE, attack speed), as life, armour, etc don’t matter, nor do cooldown reductions appear to be applied.

*According to MaxRoll follower main stats are capped at 25,000 points.

This list focuses on general farming and lower-level greater rifts. 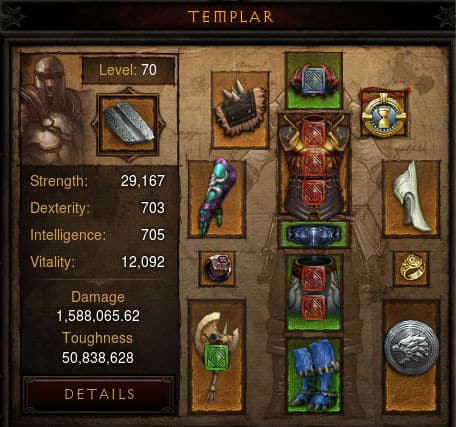 Legs: Cain’s Habit crafted, if farming keys), or any with max sockets gems

Amulet: The Flavor of Time (for pylon buff)

Weapon: Use the best you have available. Emanate specifics aside, followers do not benefit from set bonuses. However, they do benefit from legendary bonuses and procs. Plus, for some – eg XP for mobs they kill – you get 20% of it.

Notes as above, but the gear changes to reflect the greater need for damage.

Again, reroll for main stat or else damage (crit, AOE, attack speed), as life, armour, etc don’t matter. The exception to this is the Heart Of Iron chest, where, if nothing else is better, Vitality should be chosen as it adds to the thorns damage. 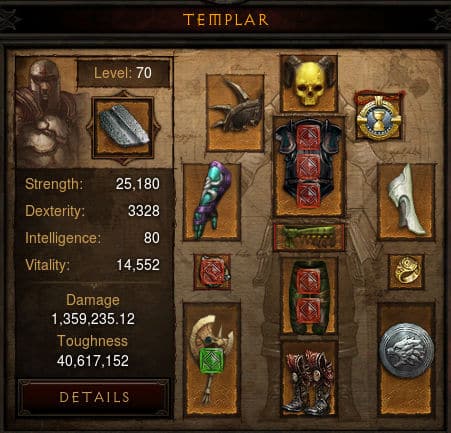 Waist: Cord of Sherma, for area of blind and slow

Amulet: The Flavor of Time (for pylon buff)

The current list of items with Emanate capabilities are the following:

The interesting bit is the last sentence, as it implies ‘more to follow’. One would hope the first of any extra would be the Ring of Grandeur, which should have been included at the start, in my opinion.

Anyway, are it stands, these are the options:

Shoulder: Spaulders of Zakara. Items no longer take damage, ‘cos gold for repairs is always a problem (*rolls eyes*)

CHEST: Goldskin. Double the gold from mobs; useful early in conjunction with the Custerian Wristguards, but otherwise, meh. Still, it can be useful in combination with other items.

*** HANDS: Gloves of Worship Doubles duration of buff from shrines. (i.e. NOT pylons, so doesn’t work in rifts, but great for farming otherwise. From Acts 2 and 4 Horadric chests)

Neck: Dovu Energy Trap. Increases the duration of stuns by 25%. Useful, for some, but trumped by the Flavor of Time.

Neck: Rakoff’s Glass of Life. Slightly increases the odds of a health globe dropping. Again, useful for some, but trumped by the Flavor of Time.

RING Avarice Band. Increases the Pickup Radius every time you pick up gold, stacking up to 30 times. Handy and better than nothing.

RING: Krede’s Flame. Taking Fire damage restores your primary resource. Handy if you like standing in flames(!) and better than nothing, but still, meh.

Or perhaps things to come. I left Blizzard feedback anyway.

Templar
Heal and Loyalty
These skills now scale based on the Templar’s Strength.

Scoundrel
Crippling Shot
… based on the Scoundrel’s Dexterity.

Enchantress
Erosion
… based on the Enchantress’s Intelligence.

HOWEVER:
You can’t reroll that stat unless you are of a similar class (or make another hero for just that purpose) and you are less than likely to want a follower of the same class as yourself.

I suggested to Blizz that they change Myriam’s enchant tables so one enchants for the player, the other enchants for their follower. Shouldn’t be hard as they have two duplicate tables in place already.

AS AN EXTENSION OF THIS:
I also suggested they extend (or add) to Kanai’s Cube so that you can apply Emanates to the follower /follower’s slots. A bit harder to do, but there are ways, especially for a multi-billion dollar developer.