Pondering the world population: How bad can things get?

It took about 3 million years from the earliest known humanoids climbing out the trees to reaching an estimated million humans by the stone age.

Zipping from flint axes, through the bronze age and into the early iron age and the start of the Roman Empire it took the human race a much shorter 10,000 years to increase one hundredfold.

Pause that for a moment. 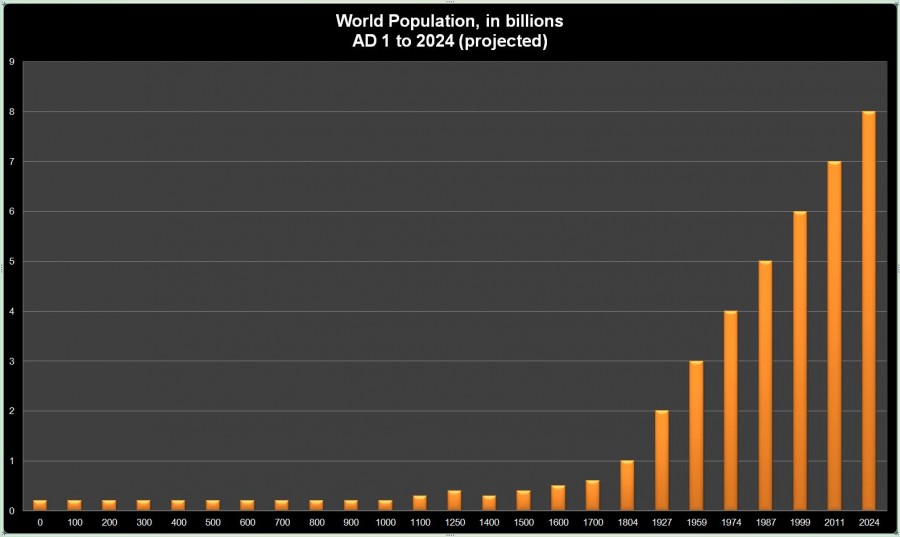 Has it sunk in yet?

It took over 3 million years for the human population to reach 1 million. Having got established it took the best part of another 10,000 years to reach – less than were born so far this MONTH alone!

More people were born this October (repeated back every month for the past few decades) than the entire human race managed in its first few million years!

It’s October and the world clocks chalked up 115,000,000 births so far this year. It’s only lunch and even allowing for deaths the world population has increased by another 130,000 today. By teatime, it was 165,000 and still accelerating. 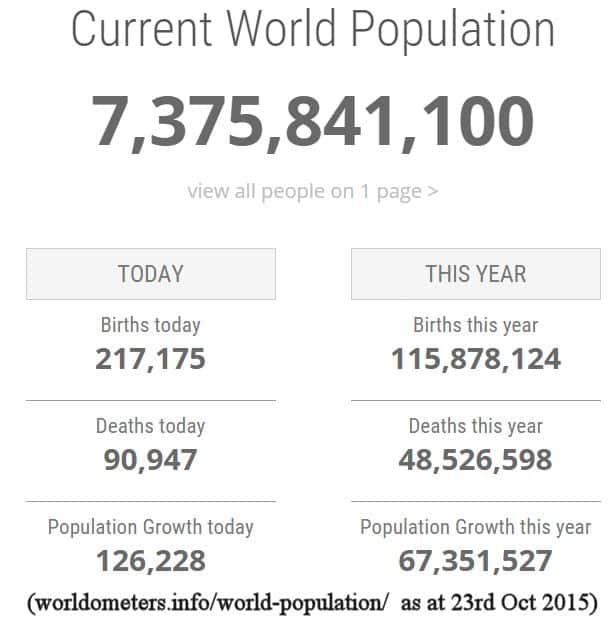 Put in another way, the world population growth so far this year – 67m – is greater than the entire population of countries like France, Spain, Italy and the UK.

An estimated 18m people died in the first world war, 60m in the second. In this year alone that number was replaced within months, twice over by the end of this year.

If a lethal pandemic sprung up and killed half the population on the planet – if over 3,000,000,000 dropped dead tomorrow – there would still be more people alive than there was when I was a child.

If said pandemic instead wiped out nearly 80% of humanity, dead lying everywhere like some cut scene from a George A. Ramero movie, approaching six billion souls gone – there would still be nearly as many left alive as were living when my grandfather was a child!

Suppose it was even worse, suppose 99.99% died. Civilisation is gone, just a few survivors dotted. Given the remaining technology, there would still be millions left to repopulate the planet within a few centuries!

Next time you see a headline about a few thousand economic migrants squatting in Calais, or a few million fleeing a war-torn zone like Syria and wonder where it will all lead too, consider the following reports of vast walls going up all around Europe:

You get the idea. A few hundred thousand migrants are causing chaos all over Europe, a scenario played out on the US-Mexico border and elsewhere.

There are lot of factors to consider, for instance:

Financial:
Even if every single migrant was honest, willing to work, spoke or was very willing to learn the language of their new country of residence, there’s the cost of housing, of pensions eventually, of schools and hospitals, more drain on all the utilities. Countries work out their infrastructural needs years, even decades in advance. Adding tens, hundreds of thousands of bodies at once is a strain for any country.

However, many migrants in the current situation aren’t fleeing for their lives, grateful for any assistance they can get. No, they are young, healthy economic travellers taking advance of the situation and often travelling through many countries to get to whichever is the most lucrative for them, whether Britain’s insane welfare system or Germany’s relatively strong job market.

Cultural:
Even if every single migrant was willing to integrate peacefully, there is no shortage of racists who will hate them for being different. Or to accuse them of taking their jobs. (Often this is lower paid work they themselves are often too lazy or ‘proud’ to consider.)

Even without the antagonism of the locals, migrants often don’t want to change. They firmly, often ferociously cling to their religion, old laws, cultural identity. Such isn’t always the case, but religion was ever about control, about power, and even if the younger generation is eager to fit in, their extended family may be set in their ways. Hence the strength of (often illegal) Sharia Courts in parts of the UK, the "honour killing" (a bizarre notion if ever there was one!) of daughters who "shame" their family because they don’t want an arranged marriage.

It’s a case of yes, we want to live ‘here’, but with our culture, our laws, our ways, our language.

Thus you read sensational, inflammatory, stories that nevertheless hold elements of truth. Of areas in towns and cities turning into a no-go zone if you don’t fit in. Of cultural intolerance and adversity. A case in point is a long established pig farm in America. A Muslim group deliberately bought the adjoining land to build a mosque on – and demanded he close his 200-year-old farm and move away. (Fox News cover of story).

Sometimes it’s ignorance too. Here’s an example. I was in a hospital for some time and got friendly with a Yemeni man (who, I will point out, taught me a little Arabic and explained the Qu’ran to me). One day the canteen messed up his ordered halal meal and offered him a ham salad… Naturally this wasn’t wholly appreciated – so the person serving it peeled the ham off and passed the plate back again! He thought he was helpful. Instead, he upset my bed neighbour even more. A small thing, not ill meant, but an example of differing values and cultures. (The same outsourced catering service offered me fish, chips and – gravy because they’d run out the meat pie I’d ordered!)

How bad can it get?

The migrants news currently filling the press is just the start of what may yet come. The world’s weather is going crazy, so more and more people are moving to avoid droughts and extreme storms. Meanwhile, the Internet’s reach is extending further and further, the number with access to mobile broadband reaching into the billions and every corner of the world.

People in genuine poverty – often slaving for companies making billions in profits on the back of their blood, sweat, pain and family deaths – are seeing how the other half of the world lives and not unsurprisingly would prefer that better lifestyle.

So, while you read of thousands breaching this border, that border, think on this:

Every dozen years there will be a billion more.

1,000,000,000 more people on the planet every twelve years, each iteration accelerating the population growth. Ever more wanting, needing the same limited, dwindling resources.

Do you think the wealthy 0.1% that own 99% of everything will want to share? Or will they just see the added numbers as more fodder for their factories? More to tie into debt? More consumer slaves to buy products they don’t need. Ever-increasing the overflowing coffers of individuals and elite families with such reserves of cash they can afford to spend £30,000 on a pen, £50,000 on a watch, €1,000,000 on a diamond-studded mobile phone, $1 billion on a private yacht!

The most realistic look at the future was depicted in the 2013 dystopia: Elysium, starring Matt Damon. Watch it, if you haven’t, it’s uncomfortably close to the truth and much nearer than its 2145 setting.

Although the film’s story is set in 2154, Blomkamp has stated that it is a comment on the contemporary human condition.
"Everybody wants to ask me lately about my predictions for the future," the director has said, "No, no, no. This isn’t science fiction. This is today. This is now."

The best book I’ve read on the situation was the latest Robert Langdon novel by Dan Brown: Inferno, currently being made into a film. Personally, I don’t think the main protagonist goes far enough, not at all, but I won’t spoil it. It’s a good story that encompasses the topic of population explosion.

(Update: I watched the (2016) Inferno film, starring Tom Hanks. Not a bad movie, but it butchered the original story and changed the end. The book is a lot better!)