Last year I had a hard drive fail on me. A Seagate. I know some people don’t like Seagate, but I’ve used them for nearly 30 years, or at least as far back as I can remember, and before this I’ve never seen one fail before.

I remember the breeze block sized 10Mb MFM’s that used to fill with bad sectors if you didn’t park the drive heads before shutting down.

I remember the change to smaller, faster RLL drives, vaguely.

I vehemently recall all the trouble with Fujitsu, the MILLIONS of people affected and Fujitsu’s attempts to cover it up, deny it, then wash their hands of any warrantees.

I also recall an Indian manufacture – Palantine, or something like that – that excelled with 100% failure rate from a crate of them.

But Seagate, no, never a one … and it makes you careless..

I still have backups on various formats of tape like qic-40, on 3.5″ floppy, on 5 1/4″ floppy even, and used to obsessively follow the 3-step backup (grandfather, father, son).

Around 1995 CD-R became more affordable and it was little trouble to back up everything once a week, once a month, as required. 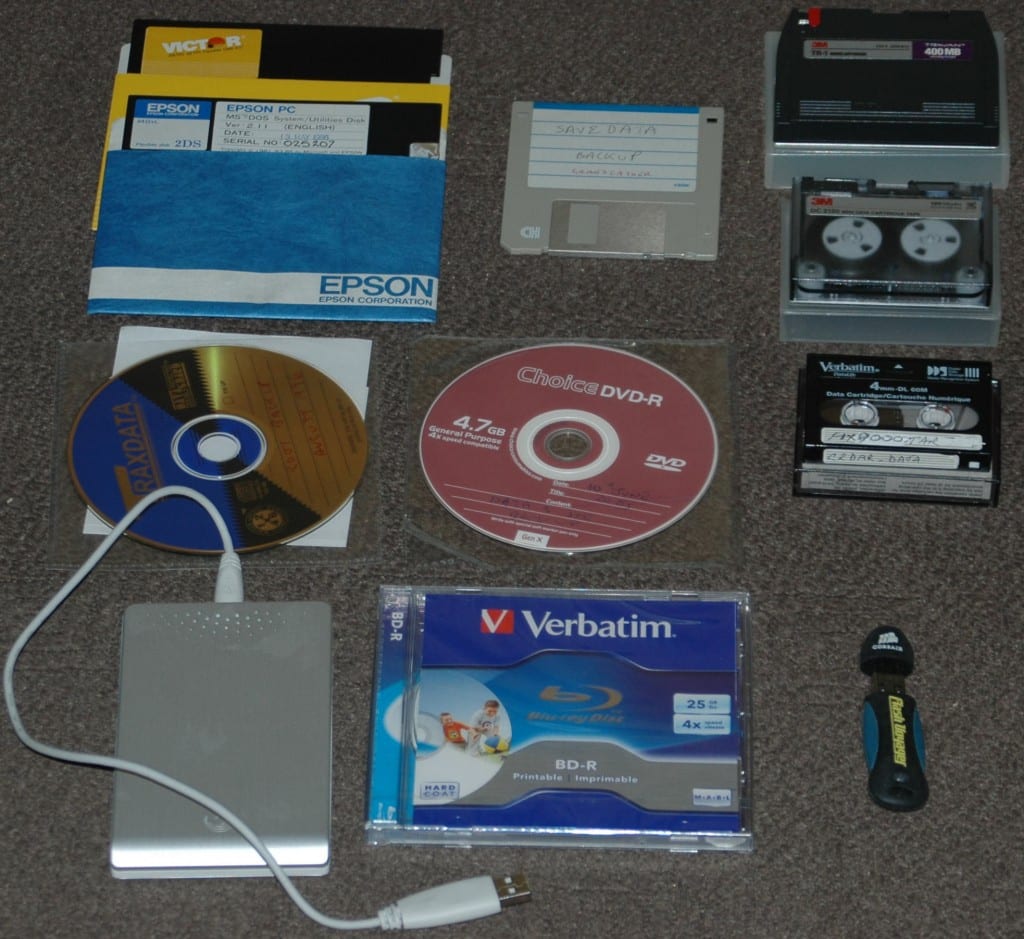 Somewhere around 2004 I moved up to DVD-R, then as files got bigger, and bigger and BIGGER I moved up to backing up to Blu-Ray and to external USB hard drives. I even mirrored and stashed away an internal SATA drive as a backup. Some stuff I stored on my web server. I keep copies in other places, too, ‘cos if you have all your eggs in one basket, stuff happens!

So over the years my backups have grown from text files filling up 360kb floppies, to tape streamers, to 600Mb CDs, to monstrously bloated 25, 50Gb, 200Gb+ affairs. And the bigger they get, the less you want to do it.

So, with an unpleasant grind, crunch and splutter, my 250Gb Seagate drive curled up and died. And that’s when I realised I hadn’t done a backup in months, despite buying a blu-ray writer specifically for it.

So, lost forever are some Christmas and winter photos, and a few text files, one with 6 months of notes I’d been meaning to type one day. Could have been far worse, and for many businesses that could – and probably would instead have led to bankruptcy. There are data recovery specialists, but for a few photos and notes, never be worth the cost to recover.

The one thing I do recall losing is the title of a song I’d spent years trying to find. I finally found it, put it in a ‘to do’ list – and lost it :S. For some reason I didn’t even put in on mySpotify or blim.fm lists either. Always the little things, eh.

Here’s the big question: What haven’t you backed up lately? Worst case scenario, you lose everything, like, perhaps:

How much will you lose? Backup up today!

Huzzah! The cloud has saved us! We can all put our trust in “the cloud.” Right?

No! Trust no-one! Besides a twitchy paranoia that companies like Google and friends are peeping at your files, seeing what value data they can extract…

Case in point, can’t remember the name, but it was one of those companies that popped up around 2009 to support Twitter, image hosting. Basically a file storage for all your files. Free, unlimited storage, all that. So it built up a following over a few months. Then changed the terms and conditions in a patch. Can’t recall the wording but the meaning was absolutely clear: “If you share files with us, or have shared files with us in the past, we get the copyright, forever, we can sell or reuse them however we like.” I saw the change (‘cos paranoid), and a few legal types read the small prints and had a “What the F?” moment.

May or may not be the same company as the one above (that tried to wholly steal people’s copyright), but Instagram does this too, apparently:
Ten things you should know about Instagram’s terms of use (2018).
Makes eye-opening reading. Unless they have improved their terms since that article was written, if you have a picture on Instagram and decide to sell it to a paper (etc) with exclusive right, they – Instagram – can sue you for breach of contract because the T&C gave them rights to your photo, to do with as they wish, and you can’t take it away from them.

The terms state that the user grants Instagram a "non-exclusive, fully paid and royalty-free, transferable, sub-licensable, worldwide license to use their content". What this means is that Instagram has all the rights of the original owner of the content – aside from the fact that it is not an exclusive licence.

It could also take a user’s content and let another company use that photo in exchange for a fee – which Instagram keeps.

5. Instagram can also give away these rights
Not only can Instagram sub-licence, use, distribute, modify, run, copy, publicly perform, display, translate, and create derivative works of user’s content, but it can also pass the rights to do these things onto a third party – without permission. It can do this because the terms state that the licence is transferable. This means that Instagram can freely assign or licence the rights to use its user’s content to another company or individual.

8. Instagram makes money from ‘sharing’
Instagram, which was launched in 2010 and bought by Facebook in 2012 &heeliip is a lucrative business and it is expected to make US$10.87 billion in 2019. The company’s key revenue stream is advertising – essentially, the more people who use and share on Instagram, the more money they make.

"I have read and agree to the Terms" is the biggest lie on the web. We aim to fix that.

Beyond that minefield lies yet another one, such as this recent beauty:

Adobe software update wipes all the photos from your iPhone – and they can’t be recovered.

Somewhere in the ToS is a line saying, “Stuff happens, it’s on you to backup your backups.” Because of this bug some people (who really should know better, like photographers) have lost years of work, face ruin, upset, and general angst.
Perhaps predictably, Adobe and Apple’s response was basically, “It happens, sorry, life goes on.” They can’t recover them, they are purged, gone forever, they themselves do not have a backup. Imagine, every picture you’ve ever taken, deleted. Unrecoverable. Gone. And the person (or company) responsible shrugs, says “Sorry” like it makes it all right, and walks away.

A few years ago, Activision-Blizzard royally messed up and somehow corrupted, then overwrote one of their servers for World of Warcraft. A great chunk of player progress in Archaeology was lost – thousands of hours per account in some cases. Activision didn’t even apologise, they shrugged, shut down the forum threads covering the loss and said – actually said – “Look at the bright side, you can have fun doing it all over again.” Corporate mentality at its best. Other MMOs have messed up in a similar way.

Also closer to home for me, and the reason I’m working on this old post – and thousands of other posts and pages etc – is compatibility issues.

I used to pay for hourly backups, for years. And they did them. Perfectly. Until, that is, I transferred from WordPress .org to WordPress .com

Here’s the thing. Automattic owns WordPress, and Vaultpress, and others. They are all under the same umbrella. If you move from one to another, the Vaultpress account moves accordingly, back and forth (i.e. Jetpack on a .org Worpdress is linked to your Wordress.com registration). BUT there’s a problem (unless they have since fixed it) – .org databases use a different SQL structure than .com ones. If you migrate to wordpress.com it breaks all the image links because it doesn’t backup the image folders. Annoying if you only have 5 pages, devastating if you have thousands, or have a photo or image gallery site.
I remember speaking to their support at the time and being told, “Sorry, Vaultpress is not compatible with Vaultpress, you’ll have to fix it manually.”

Assuming your backup is safe is a rookie mistake. I had a client once. They had paid a fortune for a massive, fireproof safe. Really, it was like a bankvault. Every day, for years, they’d back-up the company files at 5pm onto tape. Rotating the tapes daily. For years. The same three tapes. Never once tested. They just assumed they’d be fine, forever.

Despite knowing better, I made a similar rookie mistake trusting Vaultpress, and am still tying to fix all the broken links. Vaultpress is still a great solution, but assuming everything will be fine leaves a margin for problems.

Anyway, fed up with the relatively high cost of wordpress .com, I moved back to hosted sites using .org. I found the best backup-restore software I could and migrated. Or I thought I’d found the best, but there was – and remains a problem. I am assuming the developer was sloppy and didn’t test his plugin enough, while my experience suggests there was/is a country based bug. Fine if you have the right country settings, but if you have (say) a UK English one, the extended characters shuffle. The restore software randomly took characters like a single quote and replaced them with a string of French characters. Similarly, for some reason, HTML character code randomly got the same treatment. $ was fine, but £ (&pound;) become Á£. © and ™ were similarly replaced with a string of 3 French accented letters, like cedilla (ç).

I recently upgraded this site again. And it went down. Luckily it was a database rights issue, not corruption, but for a day I was on pins.

Not backing up because it “takes too long”, or “it’s a hassle”, or “don’t have time” … How long will it take to put right, to redo or replace the work. And how much is irreplaceable?

Not just computers, of course, these days, it’s your phone. You (now) know that you can’t trust Instagram, you can’t truth the cloud, Who y’ gonna call – ‘cos you can’t call Ghostbusters!

Your contacts, messages, songs, playlists, a gazillion photos and selfies. Just waiting to be lost, or stolen, or smashed.

When was the last time you did a backup of all that?

A backup? ‘A’, like just the one? Good luck with that, stuff happens.

1 thought on “On the importance of backing up”