My god, it’s gorgeous! I want one!

Courier arrived this morning and I was stood debating whether he’d need help  – and he trots round the van carrying the box one-handed.

Personally I thought it would be a bit heavy, being 24″ and all, but it’s a fraction the weight of our 19″ Illyama, never mind to back breaking tonnage of the 22″ Mitsubishi’s. Due to health problems I’m not that steady on my feet, to say the least, but I was able to easily trot upstairs carrying this in one hand. In comparison it took me about ten minutes, resting on every step, to get the huge old CRT down.

Looking up the specs, the 22″ CRT weighed about 65lb and is really bulky, the larger 24″ Dell is a svelte 15.5lb – less than a quarter the weight and a fraction the bulk. 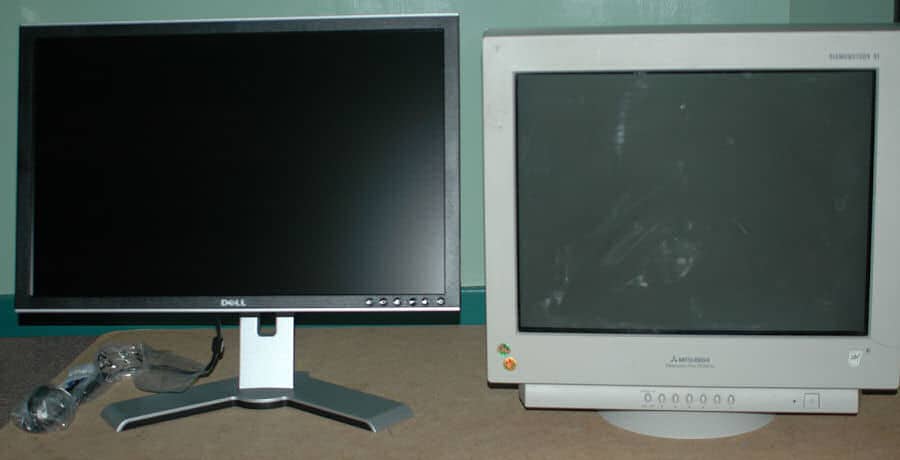 Apologies for the lack of sharpness, I’m normally a decent photographer but my eyesight’s not what it was :(. Anyway, grubby fingerprints on the screen aside, it gives you a good idea of now much nicer the newer monitors are.

HOWEVER, this next image shows the real improvement in real estate:

The comparison is, there is no comparison, the saving in desktop space alone justify upgrading, let alone the running costs.

Connections wise, as well as USB 2 and a 9 in 2 card reader down the side, there’s a raft of connections for graphics cards including standard VGA, HDMI, DVI, composite video and even a DisplayPort* – with most of the leads supplied.

*[ http://www.displayport.org ] if you don’t know, is set to (probably) replace VGA and DVI for PC’s in the same way HDMI replaces Scart and s-video for televisions. 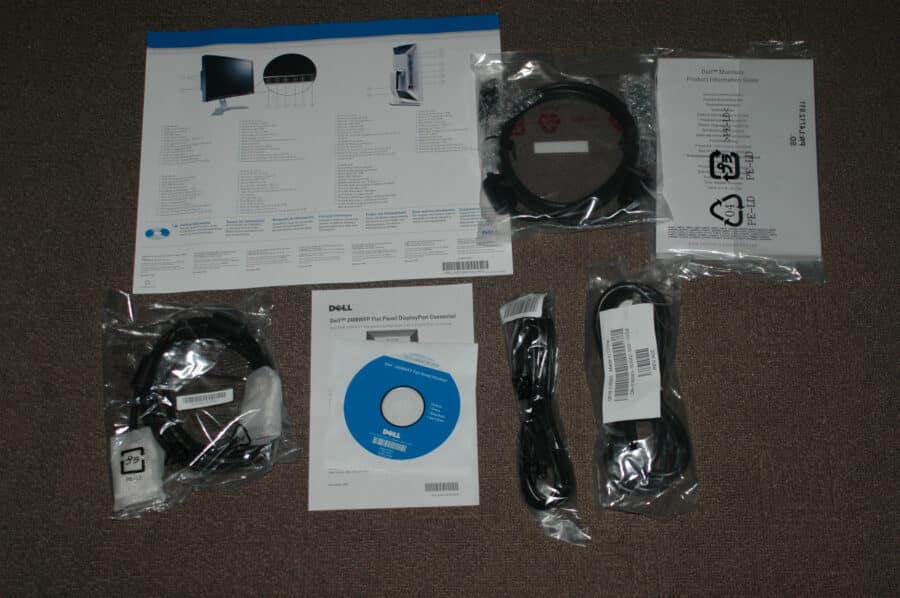 Not tried it on Linux or XP, but plugging it into my wife’s computer with Vista Home was a doddle. Not a fan of it myself, but it’s OK for people than don’t muck about and tinker, or have legacy devices, or basically do anything other than write documents and surf… But I digress, Vista took one look, said, “Thank you very much, that will do nicely sir” and cycled the setting to optimise at 1920×1200.

Strangely, I thought, the supplied driver disk doesn’t install the drivers, it loads a web page with manuals in about 20 languages. If you go to Control Panel though you can manually add them by browsing the XP-Vista folder on the CD.

Not taken images of it running but to be honest there’s little point, it just would not do it justice. It is bright as a button and pin sharp, with no motion blurring when you move the mouse, windows etc. I just sat there as I set it up whimpering, “I want one!”

Seriously, for £420 this is the best monitor you are likely to see or get for some time to come.

I’m too miserly to throw out a perfectly good monitor, even the kids 19″ Illyama, but I’m sat here typing on an otherwise superb, once cutting edge 22″ Misubishi 2070SB CRT and thinking, this is too cramped, I want one of those Dell’s. Actually I’ll buy the bigger 27″ or 30″ model for myself, when the time comes to need an upgrade, but I’m sat here scheming…

Hmmm, put Louise’s computer in our room, get a computer base for my daughter’s room – she’s just started high school and will need one for her homework, it’s educational, honest – then they get the 22″ and I need a new monitor. Sounds like a plan!

Seriously, this monitor is awesome. 10/10