Why are you refusing my money?

This post reflects on user interfaces (UI/UX) and why it’s important to check your systems.

The title originally included the sentence fragment ‘The customer is always right‘, which – as anyone in business knows – is complete tosh, but in this case applies. There is a quote that says it better:

However, in cases like this, given I’m a web developer as well as a customer, both may be true.

This is something I emailed to a multi-national company after running into a negative customer experience. Relating to Bev James ‘Do it or ditch it’ book, I had filled in a survey for a free DISC profile, liked it, and decided to take up the full package – but couldn’t because of poor implementation. (Offer since removed)

Incidentally, this not a moan because I was turned down for something, it’s about poor testing. I wanted to buy something – they wanted to sell it to me – but their ordering system was faulty for months and, as incredible as it sounds, they never looked to see why no-one was sending in orders!

It’s not, as I’ve ruled it out, but I suspected it may have been down a conflict with the browser I prefer at present as, Firefox for instance, doesn’t do the re-direct, but that would still be bad design because the only reasons for not cross-browser testing – especially for transactions and doubly so for a resource rich conglomerate – are laziness, cost cutting and sub-standard work practices. (I won’t comment on the fact historically most browser conflicts were down to Microsoft’s Explorer not following agreed standards).

Firstly it forces you to fill in all the fields – like telephone. You don’t need my mobile, why are you asking for it? I get enough nuisance calls as it is, despite blocking, without it turning up on more mailing lists, internal or otherwise.

Secondly, and again shoddy for a multi-national, it’s US orientated rather that customised for target countries – and forces you to fill in the state/province, despite correctly assigning the country.

You could fairly argue that I’m being pedantic and should just shut up and put my county under ‘state/province’.

However I as the potential consumer see it differently. You snubbed me and the rest of the world before we even start. Ideally the form should be written for the target client. Why, when the entire world is tightening it’s belt and thinking long and hard before spending money, would you want to antagonise your paying visitors?

Just to labour the point, sharp-eyed folk may notice they did use Postal Code and not ZIP/postcode or just ZIP. Again, points to sloppiness in design. That of course is just my opinion, but the customer is always right!

Letter to author and company

Re: Upgrading the free DISC report (or not).

Actually I assume you will be one of Bev’s staff, but I suspect this ‘complaint’ may want to reach her as it’s probably affecting her profits and conversions. Basically, if everyone else was seeing what I am the conversion rate would be zero, but a glance at your analytics should tell you about your bounce rate.

I was reading ‘Do it or Ditch it!‘ and seeing the reference to your site scooted off for a free DISC report. It was, as might be expected, close to the mark, so after a little deliberation I decided to get the full report. And I can’t order it – the page sends you to a generic page that blocks the transaction, so something’s clearly off at the code/design level.

I completed the questionnaire without a hitch and get send off to read my free report [link]. (Precisionist, wouldn’t you guess)

Liking it, I think, £19 for the full report, what the heck, may prove a worthwhile investment and the email happily directs me to buy said report :

Upgrade to a FULL REPORT : [ link#purchase ]

HOWEVER, it doesn’t go to that page, it redirects you to here instead : [link: home page] and when you add your credit card and submit the order – in a very unhelpful and poorly designed manner it slops down a message simply saying:
“This transaction cannot be accepted”

The “upgrade now” button does correctly point to [ link:profile ]

The message itself is, logically speaking, in the wrong place as it should be more prominent, ideally below the ‘upgrade now’ button.

It’s also harder to read than it needs to be as it’s in dark orange on a dark background and in a fancy font instead of a sans serif.

More to the point, the advisory is not fit for purpose. All the fields are correctly filled in, the submit link is pointing to presumably the correct profile, my credit card is valid and up to date (not that it’s actually trying to validate the card), so I’m left asking myself why it can’t be accepted – isn’t my money good enough? Has the offer ended?

Call me pedantic if you like (or the precisionist you profile me as), but when I’m told you can’t accept my order I get a bit antsy and want a valid reason. The terse refusal without advise or help or anything other than a frankly rude hand in the face saying “No!” can rub folk up the wrong way – like me, for instance. 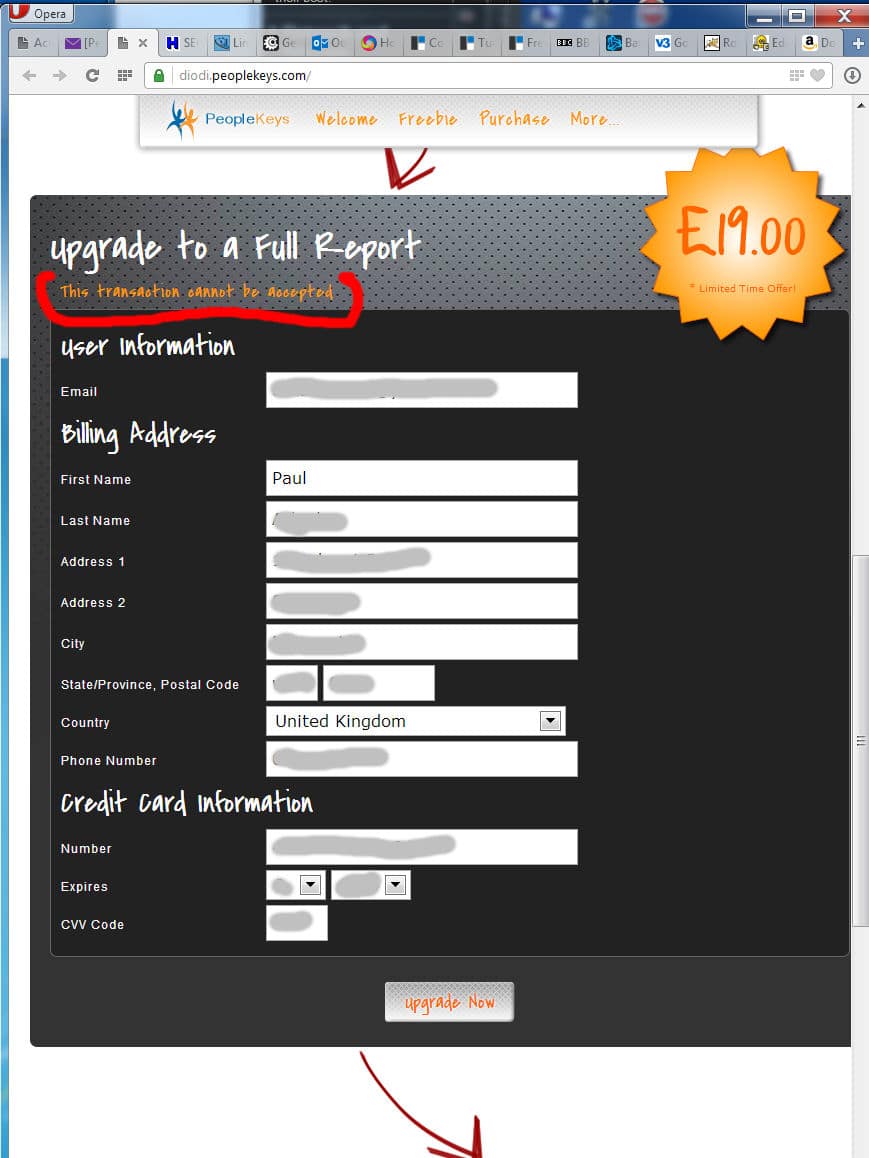 I’m a firm believer – when it comes to experience opinion – in the thought that “the customer is always right, even when they are wrong”, because what they think and feel IS what they think and feel. I read a quote once, I think by Neil Gaiman, that echoed this feeling. It said that if a reader tells you your book is rubbish, he’s (probably) wrong, but if he he tells you he thought it was rubbish, he is right. It’s an importance distinction.

Maybe I’m the only person seeing this conflict, but I doubt it as there exists that desultory message.

For every 100 people that see this rejection at the point of sale I would imagine 99 will shrug and walk away. If you don’t want closure I’ll go elsewhere with my money. As you (Bev) would point out, not only are you losing 99*£19, you are also potentially losing 99 people that might want fries with that, maybe a molten hot apple pie so to speak. 99 people that may otherwise have come back with their mates to try it, one of whom is the HR director of Weneedsomethinglikethis PLC… All of a sudden it’s not £1,881 you lost, it’s 99*£1,881, so a million.

Anyway, a reply would be appreciated on how to complete the transition and I’ll leave it to your web team to consider the design flaws.

They got back to me a few days later, saying:

Thank you for alerting us to this error. We have now been in touch with our US counterparts and they have fixed the broken links.

If you would still like to purchase a full DISC report then this should now be possible.

Many thanks again for providing your feedback.

They did also kindly include the interim emails between the various companies and support teams. I’ll edit most of it out for brevity, just including the salient lines

Following a lead from Bev’s book, DO IT! OR DITCH IT, we’ve had one disgruntled customer who couldn’t complete his order for the full report. When he opted to ‘upgrade to a full report’ the page directed him back to take the free assessment.

Can you investigate why this may be happening please?

I can see that our the last person to purchase a full report was on 1st August 2013, (several months back!) so just want to make sure all is operating and as user friendly as it should be to encourage as many conversions in paid reports as possible.

*mutters* Disgruntled indeed! Only with the ordering bug, which they have indeed now fixed, I’m happy with the product itself. Personally I think I’m a ‘hero’, given the fact they (and possibly all the other franchises!) were rejecting all orders from this product for a good three months and it could have gone on for far longer had I not taken the time to notify them. Go me! Them, not so much.