There’s another bleeding hearts ‘luvee’ post on Yahoo by the Guardian that has me kicking off, again: EU obsession with migration is shameful, racist and fatal by Observer columnist Kenan Malik.

It basically says how awful the EU and European countries – especially Italy – are for not continually welcoming an ever greater number of (often economic) migrants (being ferried by illegal traffickers).

Sorry, but while the boats should rescue them, they need to about turn 180 degrees and take them back where they came from!

Part of the problem is their own countries are being massively exploited by global corporations, whether for cheap labour, or resource stripping.

The other problem is they are mostly either from corrupt dictatorial countries and/or ruined by religious/caste systems. Even if they are genuine refugees, fleeing a war zone, the root causes are the same.

Yet when you see streams of migrants in Europe (noticeably less so in South America), how often are they predominantly pictured as young, healthy, males, with money enough for cigarettes and smart phones – as opposed to much older men, women, and children.

They can’t fix their own nations, so move west – to the very same ‘decadent’ western civilisations they, in too many cases, utterly despise. That is never going to end well… They can’t fix their own broken system, so move to the lands of free money, free housing, etc (a HUGE, unsustainable and wholly unfair drain) and, often refusing to change, to integrate, so begin to tear down and break the host they are “invading”. 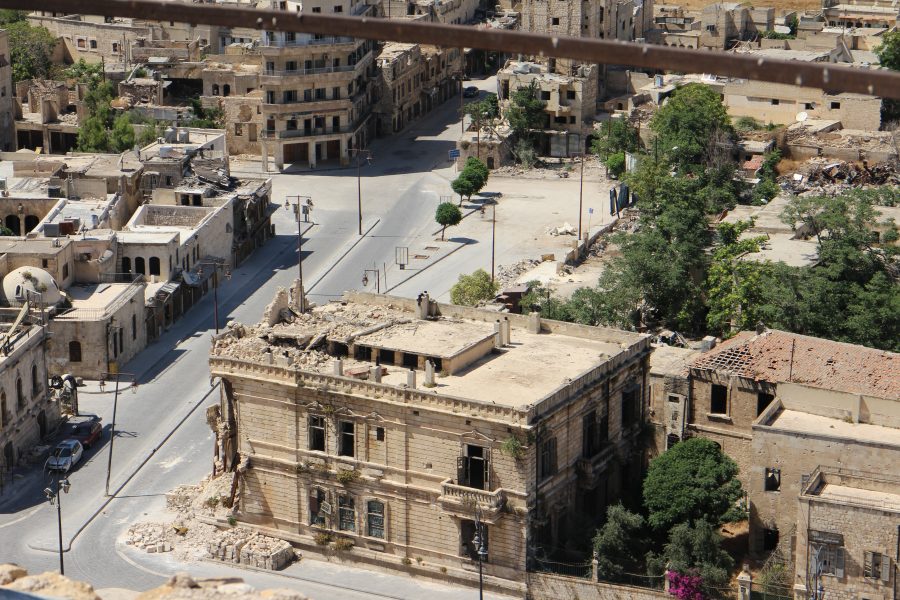 Let’s say, for arguments sake, they integrate 100%, they keep their culture alive, but moderate it to fit with Europeans lifestyles, languages and laws.

Let’s also say – impossibly – they all also find employment or create jobs, they all bring needed skills, a positive boon to their host country, how does that play out?

Some estimates say that over the next two decades 100 million people will migrate from Africa, parts of Asia and the Middle East to Europe. 100 million. That increases the size of each country by an average of 4 million, for which you need hospitals, schools, millions of houses built, and all the rest of the infrastructure. Can you imagine Luxemburg (population 600,000) or Belgium (population 11 million) integrating 4 millions each? Or say Germany and England instead taking 50 million each?

Even if you manage that, a nearly impossible task in itself, the rest of these poorer countries will look enviously west and join the march. Oh, and you can’t say a word against it because the UN talked your governments into accepting migration as an inalienable right, to speak up will be a criminal offence.

Well, so much for all Theresa May’s LIES about taking back our borders!

Either Mrs May personally, or possibly, on her behalf, Alistair Burt, Minister of State @foreignoffice and @dfid_uk and MP for NE Bedfordshire, signed us up for it, but it’s buried deeper than a tick on an sheepdog. You try finding ANYTHING on gov.uk, on BBC, on C4, in the Times, anything, anywhere.

For over over two years Mrs May has swore blind we will "take back our borders", then, without a vote or discussion in parliament, with a total media blackout, she apparently sent a lackey to sign us up.

Uncontrolled migration damages economies and places lives at risk. Today I am in Morocco to support the Global Compact #ForMigration which tackles this international issue while recognising every countryâ€™s right to control its own borders.
[3:17 AM – 10 Dec 2018]

With it ‘we’ agree that we will (eventually) take unlimited migrants and that if we post about it, or complain, we can be arrested for inciting racial hate. Officially it’s ‘guidelines’, a ‘framework’ – until it isn’t, which is why the Belgians kicked off and booted their PM out for signing them up on the sly!

There was a petition with over 125,00 signatures, but it was just steam rolled over with a ‘we think it’s a good thing reply, we’re not debating it/ reply.

UN migration pact, or Marrakech accord, or to give the full name, ‘Intergovernmental Conference to Adopt the Global Compact for Safe, Orderly and Regular Migration’, is being signed up for without a word to the nations by their representatives (i.e. politicians, e.g. Mrs May).

You can read the draft here: Intergovernmental Conference to Adopt the Global Compact for Safe, Orderly and Regular Migration Marrakech, Morocco, 10 and 11 December 2018

Not only that, there has (strangely?) been an almost complete media silence and blackout on the matter. Most people have never heard of it, yet it is world changing. It’s a set of ‘ideals’ that the signatories are expected to make into binding law, and that makes human migration and mass migration a basic human right. Some will argue that it’s just ‘suggestions’, not legally binding, but meant to frame future legislation. You don’t put a bullet in a gun and ‘suggest’ people use it to do some dusting, hmmm.

Purely as an example, taken at its most ridiculous and hysterical conspiracy theory/NWO/Kalergi Plan extreme, upon ratification, if 100 million Pakistanis decides to move to France, or Germany, or England, they can just walk in – no passport needed, no criminal checks undertaken – and be given – as their basic human right – a living wage, housing, and support in their native language. And if you say a word of protest, if you blog to complain, if your TV studio or newspaper reports it, you can be shut down and/or arrested for hate crimes!

The thing you have to understand is that it isn’t because of a care for third world countries, it’s because fertility is falling in the west and the solution – to maintain global profits – is to top up – to replace – the workers, essentially because of graphs, of profits. For the likes of Apple, Starbucks, Amazon and Google to make even more money this year than last year. Because, for global economists, a company only making Â£1 billion profit and not the predicted Â£1.1 billion is a devastating “loss”.

You see it all the time with ‘market reactions’. The companies haven’t gone bust, haven’t suffered a devastating loss, they maybe – for a short time – drop 1% in share price, or the pounds drops 1% on the dollar, and the market goes into hysterics. Yet the people at the top, with their private islands, private jets, and Â£100 and Â£500 million luxury superyachts, will never be affected by the misery they create. People don’t matter.

Marcel de Graaff, speaking at the EU: Criticism of (mass) migration will be criminal offence:

Countries that import the third world will become the third world, and it’s absolutely clear, and you all know that, that in 3rd world countries multi-nationals dictate the rules

This next one an especially clear insight to the real issue: Immigration and World Poverty Explained with GUMBALLS – Does Immigration Really Help The Poor?

This is not a Global compact #ForMigration, but for safe, orderly and regular migration. This is an effort to do better together, to look at the decades ahead of us, and collaborate on the wide range of issues pertaining to international migration

Euronews: What is the UN migration pact that’s causing political turmoil in the EU? Euronews answers

American? Well, if these projections are to be believed, the population of the USA will treble by 2100, and over two thirds of the country will be immigrants. The Native Americans would certainly point out the irony of this, though it might be lost on the ‘invading’ South Americans who, in turn, are the off-spring of the Spanish and Portuguese that literally invaded Latin America and set out to eradicate those native populations and cultures in their greed for Aztec gold.

Not authoritative, but neither is it ‘conspiracy theory’. It is what it is. Watch this compelling video by Norwegian blogger Peter Sweden:

A few years old, but still apt: A few sobering facts about population and greed.

When governments conspire to replace nations!

In conspiracy theories, one of the bigger ones in the last century is the Kalergi plan, in part a plan for European political integration (and thus the EU as it stands), with an added sting, that Europe, that the world becomes one mixed race. Perhaps, over the next few thousand years that will happen anyway, but rushing it to appease the money markets, not such a good idea.

Of course, as all the sensible sites and books warn, it’s nonsense. That said, every now and then, we see stuff happening in the real world, where actions speak louder than words. Stuff like UN: Replacement Migration

Replacement Migration: Is It a Solution to Declining and Ageing Populations?

United Nations projections indicate that over the next 50 years, the populations of virtually all countries of Europe as well as Japan will face population decline and population ageing. The new challenges of declining and ageing populations will require comprehensive reassessments of many established policies and programmes, including those relating to international migration.

The world is overpopulated, it’s getting worse by the day. It won’t be in my lifetime, but the UN predicts that by 2056 there will be over 10 billion people on the planet. Short of (an arguably much needed) global pandemic to cull our numbers the only solution is (Chinese style) to limit family size (ethically), and for them to fix their own shit instead of pooping in a new well. That’s not ‘racism’ it’s a matter of fact, of logistics, of pragmatism.

Also of possible interest: Pondering the world population: How bad can things get?

Also dated but extremely salient: Pondering the world population: How bad can things get?

For a perhaps more humorous, but unapologetically irreverent tone, I offer: A Refugee’s Tale 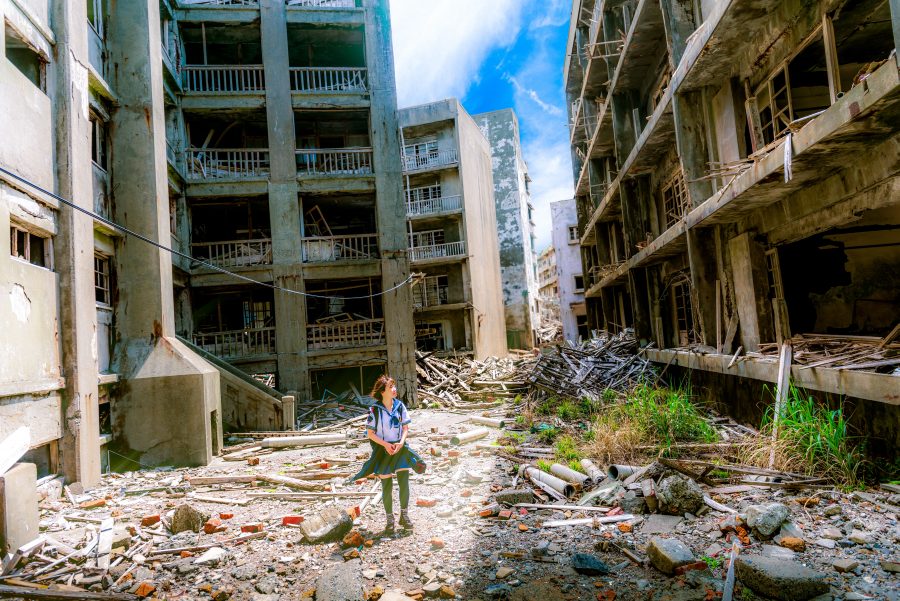 (e.g.: Express, 2016: Benefits mum-of-five wants a BIGGER home so her kids don’t have to share a bedroom. "Unemployed Rachael Dower, 28, says her housing provider must upgrade her as her brood has outgrown her current property. She has not worked in over ten years and now she wants a larger house so her children all have their own space. "

e.g.: Daily Star 2014: I’ll use surrogate to have MORE kids! Benefits mum-of-eight wants bigger house, "A MUM of eight who gets Â£26,000 a year in benefits will use a surrogate to have more kids and get a bigger council house".)

When you risk increasing, even doubling that population with another culture, especially with such a hopelessly broken system in place, everything fails. Completely.

[ Featured image is a deserted refugee camp in Calais, by
by Radek Homola on Unsplash ]

[ Ruined city with a girl is actually a photo of Gunkanjima, an abandoned island in Nagasaki, Japan by Jordy Meow on Unsplash ]