Dark Waters and the forever chemicals 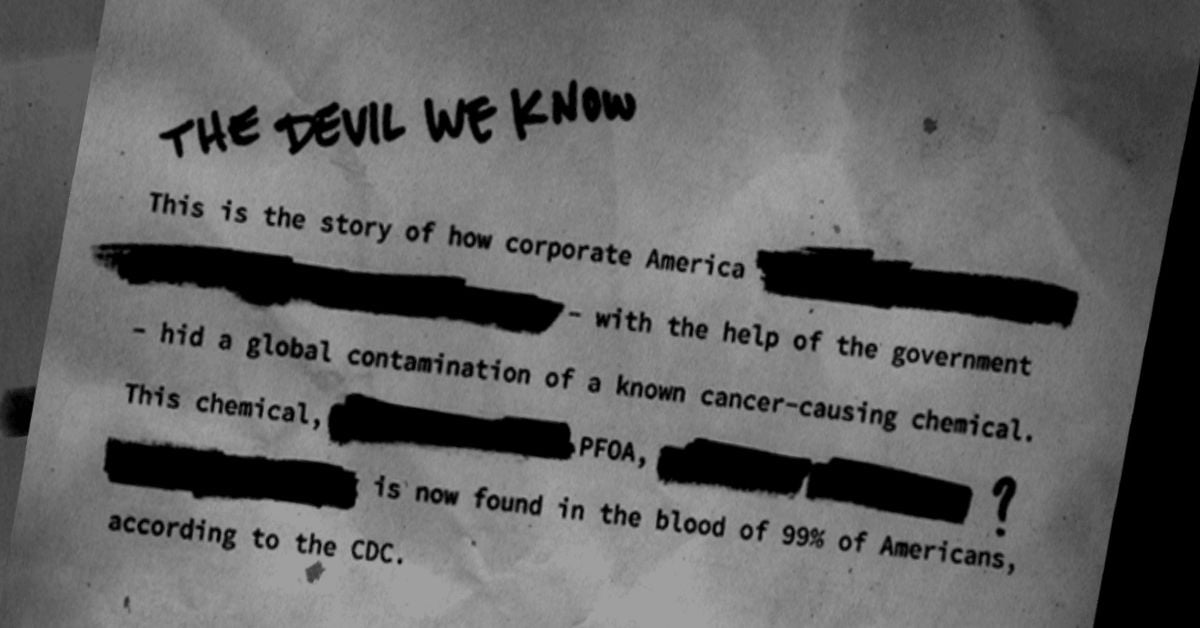 The other day I watched a supposedly true film called ‘Dark Waters‘, with Mark Ruffalo. The plot is that a multi-national chemical company, supported by the government, poisoned a whole town, poisoned the whole world in fact, and got away with it for the most part. Are still getting away with it. And there it ended, with a footnote saying the fight goes on.

The IMDb blurb reads, “A corporate defence attorney takes on an environmental lawsuit against a chemical company that exposes a lengthy history of pollution.”

True story? Actually yes. The company was and is known as Du Pont, though it’s merged with another equally vast company since. Along with 3M (another massive company), they came up with a long chain fluorocarbons (PFOAs) for tanks, and decided to sell it to the world. But there’s a sting. It’s toxic, and in doses as low as 1 part per billion cause a raft of problems, including cancer.

The are THOUSANDS of unregulated chemicals like these in use, in our food, our clothes, our drinking water.

As the Guardians reported in 2019, the companies deny responsibility for toxic ‘forever chemicals’ contamination, as the 3M Company, the Chemours Company and DuPont appeared before lawmakers over PFAS.

Forgot their possible, even probable malfeasance for a moment. This is the nub of it:

The class of chemicals, called PFAS, are in non-stick pans, water-resistant clothes, food packaging and firefighting foam. Nicknamed “forever chemicals”, they do not break down in the environment and accumulate in the human body. Numerous studies link PFAS exposure with cancer, thyroid problems and developmental issues in children.

The article, from 2019, adds: “The chemicals have been found in high levels in groundwater near industrial facilities and near military installations and airports that have used PFAS-based firefighting foam.”

In fact – and this is true also, and reminiscent of the tobacco industry – they were aware of the problem as far back as 1950 (seventy years ago). By the 1960’s there were fully aware of the dangers. How so? Well, as the film shows, the nasty bastards laced cigarettes with the chemical and gave them to a group of their employees to assess the affects: they all died, mostly of cancer. If anyone else did that it would be murder. A cash rich company, one beloved by the stock market does it, well, it was science. Besides, we have more lawyers than you, we’ll fight it.

Just so you understand the importance of this – that product forms Teflon, as in cooking pans. The companies involved make billions in profits, the governments makes billions in tax, it’s a win-win (for them). Apparently up to 98% of America (animals and human), and people cross the world have this and other forever chemicals building up inside them. The £500 million fine and settlement was just pin money to them, a slap on the hand.

While is it mostly an American issue, it goes far before their shores. As a related post warns:
“It can be found in non-stick cookware, fire retardants, stain and water repellents, some furniture, waterproof clothes, pizza boxes and take-out containers, food packaging, carpets and textiles, rubbers and plastics, electronics and some dental floss.”

(Guardian, 2019: PFAS everyday products toxics guide, what can PFAS be found in?)

As one of the comments observed, “This is my community. I know the living people who suffer from this. We don’t even give our water to my dog. I graduated with that farmers grand daughter. He and his wife both died of cancer. And there was no justice. Nobody went to jail. Please watch the devil we know. Truth is scarier than fiction.”.

I’ll leave you to research further, but if you want the 101 analysis, they tweeked the formula, gave it a new name, and carried on as if nothing had happened.

It may come as no surprise that they are reports that the new, improved and ‘safe’ version has almost the same dangers as the old version. You might have to wait another fifty years for this to unfold. Then, of course, a new formula, greater profits, and another fifty years, while the richer get richer and the rest of the world sickens. SSDD.

Fact-finding on the Google trail

Wikipedia: “GenX is a Chemours trademark name for a synthetic, short-chain organofluorine chemical compound … DuPont began the commercial development of GenX in 2009 as a replacement for perfluorooctanoic acid (PFOA, also known as C8).”

Wikipedia: “Chemours, is an American chemical company that was founded in July 2015 as a spin-off from DuPont.”

The trick it to learn when corporation are lying right to your face, even when they tell you (their version of) the truth.

Then again, there is this PFAS position statement, also on Du Pont’s own site. While forcefully reiterating that “DuPont does not make PFOA, PFOS or GenX.”, the page continues:

Today, our manufacturing and internal use is less than .01% of the total PFAS used in the world.

Forget for a minute that they spun off the factory in a PR dodge, they begin with bold announce that they do NOT use the stuff, then tell us they they do. Some people – and I’m one of them – tend to have a binary view of things. If some smackhead say “I do not do drugs”, and then says, “Well, I do, but my mate stores them, so *I* not doing drugs”, then adds, “though I am using, right now in fact.”

Well, see, that is a problem. You might claim you are trying to be seen to clean yourself up, but it’s obviously that you are still a pothead.

You might also want to read THE TEFLON TOXIN. DuPont and the Chemistry of Deception. Google flag it as ‘scholarly, though it’s on a legal site. Written in 2015, it tells how “Over the past 15 years, as lawyers have been waging an epic legal battle” (against Du Pont).

NBC observed that the cleanups and health care costs run up by DuPont (and slyly sidled into Chemours) could reach into the tens of billions of dollars, which the (new) company doesn’t have. So, it maybe files for bankruptcy, writes off a billion dollars, the share market cheers, “You dodged that one!” and the DuPont share price goes up. You couldn’t make it up, but that is the reality of the corporate world: Being murderous and getting away with it is seen as a good thing!
How I look at it, anyway.

Extract from: How DuPont may avoid paying to clean up a toxic ‘forever chemical’ (NBC, March 2020)

“Chemours, with primary responsibility for the estimated tens of billions of dollars in PFAS obligations, does not have anywhere near the money or assets to cover them. Chemours’ net worth — its assets minus liabilities — stood at just $695 million as of Dec. 31, 2019.

If Chemours becomes insolvent, Corteva Inc. will be responsible, corporate filings show. Corteva does not have the funds to cover tens of billions in estimated PFAS costs either. Turner declined to say whether PFAS responsibilities would ultimately revert to DuPont if Chemours and Corteva are unable to pay them. A lawyer for Chemours declined to comment.

And so the corruption continues

There are a number of other books, films and documentaries (e.g. The Devil We Know) covering this and other, similar cover-ups. This isn’t a wild conspiracy post, this is old news. Real news. Between the profits on corporate America, and the health of the rest of the world, we take last place. Not second, not third, last place. They will, they have, and still are covering up such controversies, and when caught try to bury it, or drag it on in court for so long everyone gives up, or, if that fails, pay a large but essentially token fine and carry on as normal. Corporate greed knows no boundaries.

Most conspiracy theories are bunkum, but, and this is my stance, if they involve billions of dollars a year in profits, and governments are getting a slice of the action, and the detail getting out, or the case being lost would spoil all that filthy lucre, well, maybe it is simply a conspiracy, but maybe ya’ll want to dig a little deeper, ‘cos as this shows, cover-ups and worse do happen.

You might want to look into Fed up, and the lobbying power of ‘Big sugar’, e.g. CBC News (2014): Documentary: “Fed Up” with rising childhood obesity, IMDb: Fed up

If you liked this, you might also find this interesting: Charley Reese’s final column for the Orlando Sentinel