Is it a conspiracy when it’s true?

I normally stay well, well away from arguments about politics because there is no right of it, its not something you can ‘win’, for this though I’ll make an exception. If you read the copied article below, he just said what we all think, what we all know is true. That an absolutely minuscule cabal of politicians and leaders numbering just a few thousand around the planet are ultimately responsible for virtually all the pain, suffering, greed, debt and atrocities around the globe – and they like it that way, it keeps them in power, in unimaginable wealth.

So when you see and hear people in pubs and clubs, buses and train, on Twitter and Facebook and sites around the world ranting and blaming their personal woes on Labour, on Tory, on the Democrats, Socialists, Libertarians… remember, it makes no difference who is in power, they are all the same. Left or right, voted in or military coup, the country and world is ruthlessly dominated by a coterie of power-hungry ego maniacs and control freaks that believe to their last fibre that it’s their divine right to rule absolutely, that they are better than the rest of us.

When you see people – many whom weren’t even born at the time – gloating that “Thatcher’s dead”, that the poor sods in Boston deserved it for funding the IRA, trolls laughing that it’s “not the same when it’s ur back yard”, when you see fingers pointed at this country, that religious group, this other minority… pause and think who is really to blame. As if you are really jaded, ponder whether the story and thread isn’t being manipulated by hired individuals whose masters have a hidden agenda!

And if you are really paranoid and into conspiracy theories then…

Whether it’s a stealth tax, an embarrassment or something far, far worse, whatever ‘they’ are trying to cover with a news event just slipped in under the door while you followed their misdirection to get something ‘they’ want passed or hidden from the media’s eyes.

“Charley Reese wrote his last column for the Orlando Sentinel on July 29, 2001. … After retiring from the Sentinel, which he joined in 1972, Reese continued writing a nationally syndicated column for King Features until 2008.”

A very interesting column. COMPLETELY NEUTRAL.
Be sure to Read the Poem at the end..

Charley Reese’s final column for the Orlando Sentinel… He has been a journalist for 49 years. He is retiring and this is HIS LAST COLUMN.

Be sure to read the Tax List at the end.

This is about as clear and easy to understand as it can be. The article below is completely neutral, neither anti-republican or democrat. Charlie Reese, a retired reporter for the Orlando Sentinel, has hit the nail directly on the head, defining clearly who it is that in the final analysis must assume responsibility for the judgments made that impact each one of us every day. It’s a short but good read. Worth the time. Worth remembering!

Politicians are the only people in the world who create problems and then campaign against them.

Have you ever wondered, if both the Democrats and the Republicans are against deficits, WHY do we have deficits?

You and I don’t propose a federal budget. The President does.

You and I don’t have the Constitutional authority to vote on appropriations. The House of Representatives does.

You and I don’t write the tax code, Congress does.

You and I don’t set fiscal policy, Congress does.

You and I don’t control monetary policy, the Federal Reserve Bank does.

One hundred senators, 435 congressmen, one President, and nine Supreme Court justices equates to 545 human beings out of the 300 million are directly, legally, morally, and individually responsible for the domestic problems that plague this country.

I excluded the members of the Federal Reserve Board because that problem was created by the Congress. In 1913, Congress delegated its Constitutional duty to provide a sound currency to a federally chartered, but private, central bank.

I excluded all the special interests and lobbyists for a sound reason. They have no legal authority. They have no ability to coerce a senator, a congressman, or a President to do one cotton-picking thing. I don’t care if they offer a politician $1 million dollars in cash. The politician has the power to accept or reject it. No matter what the lobbyist promises, it is the legislator’s responsibility to determine how he votes.

Those 545 human beings spend much of their energy convincing you that what they did is not their fault. They cooperate in this common con regardless of party.

The Constitution, which is the supreme law of the land, gives sole responsibility to the House of Representatives for originating and approving appropriations and taxes. Who is the speaker of the House?( John Boehner. He is the leader of the majority party. He and fellow House members, not the President, can approve any budget they want. ) If the President vetoes it, they can pass it over his veto if they agree to. [The House has passed a budget but the Senate has not approved a budget in over three years. The President’s proposed budgets have gotten almost unanimous rejections in the Senate in that time. ]

It seems inconceivable to me that a nation of 300 million cannot replace 545 people who stand convicted — by present facts — of incompetence and irresponsibility. I can’t think of a single domestic problem that is not traceable directly to those 545 people. When you fully grasp the plain truth that 545 people exercise the power of the federal government, then it must follow that what exists is what they want to exist.

If the tax code is unfair, it’s because they want it unfair.

If the budget is in the red, it’s because they want it in the red.

If they do not receive social security but are on an elite retirement plan not available to the people, it’s because they want it that way.

There are no insoluble government problems.

Do not let these 545 people shift the blame to bureaucrats, whom they hire and whose jobs they can abolish; to lobbyists, whose gifts and advice they can reject; to regulators, to whom they give the power to regulate and from whom they can take this power.
Above all, do not let them con you into the belief that there exists disembodied mystical forces like “the economy,” “inflation,” or “politics” that prevent them from doing what they take an oath to do.

They, and they alone, should be held accountable by the people who are their bosses. Provided the voters have the gumption to manage their own employees… We should vote all of them out of office and clean up their mess!

Charlie Reese is a former columnist of the Orlando Sentinel Newspaper.

What you do with this article now that you have read it… is up to you.
This might be funny if it weren’t so true.
Be sure to read all the way to the end:

Tax his land,
Tax his bed,
Tax the table,
At which he’s fed.

Tax his tractor,
Tax his mule,
Teach him taxes
Are the rule.

Tax his work,
Tax his pay,
He works for
peanuts anyway!

Tax his ties,
Tax his shirt,
Tax his work,
Tax his dirt.

Tax his tobacco,
Tax his drink,
Tax him if he
Tries to think.

Tax his cigars,
Tax his beers,
If he cries
Tax his tears.

Tax his car,
Tax his gas,
Find other ways
To tax his ass.

Tax all he has
Then let him know
That you won’t be done
Till he has no dough.

When he screams and hollers;
Then tax him some more,
Tax him till
He’s good and sore.

Then tax his coffin,
Tax his grave,
Tax the sod in
Which he’s laid…

Put these words
Upon his tomb,
‘Taxes drove me
to my doom…’

STILL THINK THIS IS FUNNY?
Not one of these taxes existed 100 years ago, & our nation was the most prosperous in the world. We had absolutely no national debt, had the largest middle class in the world, and Mom stayed home to raise the kids.

What in the heck happened? Can you spell ‘politicians?’
I hope this goes around THE USA at least 545 times!!! YOU can help it get there!!!

Remember I said about misdirection?

Always well to look deeper at what’s being said.

That wasn’t actually Mr Reese’s last post, it’s a many times doctored one he apparently wrote way back in 1984, possibly 1985 and re-used in 1995. Rather apt that in the Person of Interest conspiracy show the vigilante protagonist is also a Mr Reese. If you want the original story you’d have to go the the papers themselves and read the micro-fiched archives. Still, it’s essence holds true.

Read this, posted back in 2011 in the Orlando Sentinel: “Like Frankenstein, Charley Reese’s “final” column lives again”

As much as you can trust anything on the interest, if you’re interested, you can read his “real” final column, and many other of his columns, here, on the Memphis Flyer website. Funnily enough, the link to his ‘real’ final column isn’t a link to that but to article about the above not being said final article. 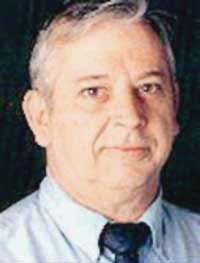 Short of actually flying to Florida and finding the actual original post, this is the closest I’ve got after a little digging: Snopes correctly attributed copy from 1995.

The article, flagged ‘Urban Legends Reference Pages’ © 1995-2013 by Barbara and David P. Mikkelson cites the original, undoctored column post as being printed in:

Reese, Charley: “Looking for Someone to Blame? Congress Is a Good Place to Start.” Orlando Sentinel, 7th March 1995 (p. A8)

Below is are merged screen grabs of the above Snopes versions. I will ask them permission to copy it as text. (Full attributed, of course!) 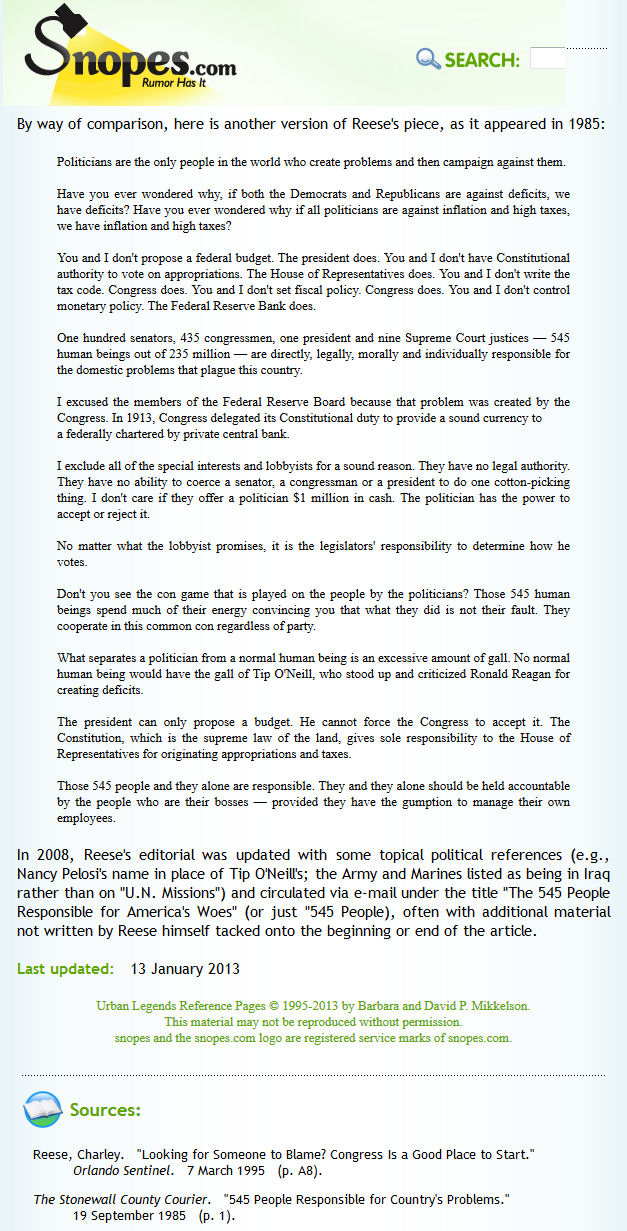 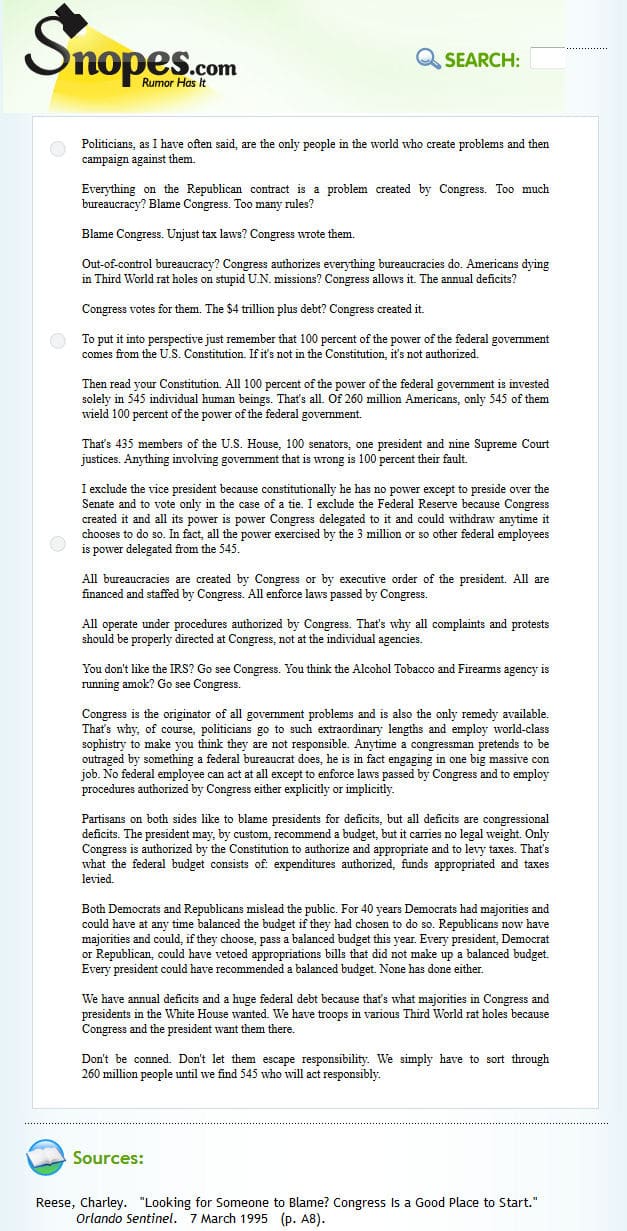