Are you Right-brained or left brained? Take the Sommer and Sommer test to find out. 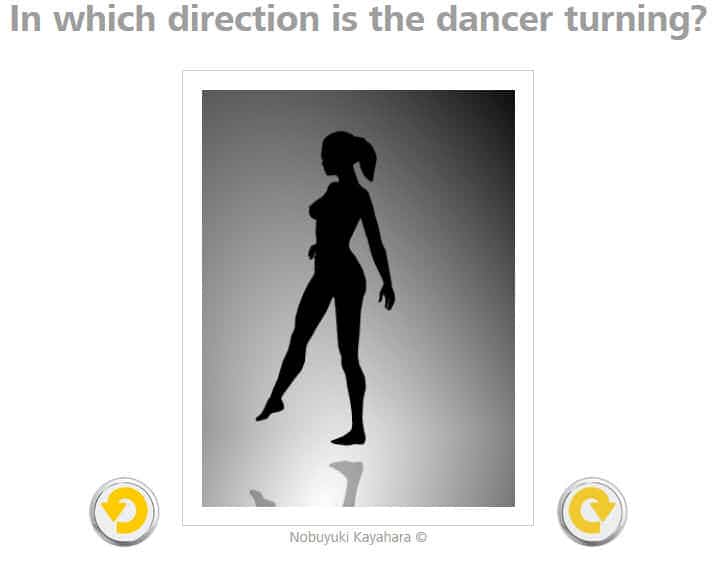 Are you more creative, or analytical? Left or Right brain dominant? There’s a 30-second test to find the answer, apparently. Take the Sommer and Sommer test to find out!

I can’t comment on the reliability of these results, but it was fun and interesting, only took a minute and cost nothing, so what’s not to like. It’s broken up into a handful of visual tests, based on how your brain interprets images, motion and data. I haven’t got a clue how they get the first one to work. The cynic in me says everyone just sees it spin the same way. The colour-word one I’ve seen before used, used in hospitals as part of a battery of tests for mental patients… Threw me then, still throws me now. That said, as you’ll see, I do not believe they validate the results, it is more a clever slide show, not interpreted in any way.

According to how your brain works, the dancer will either turn clockwise or counterclockwise. If she turns clockwise, then you use predominantly the right side of your brain and you are more than likely right-handed.

Don’t know how it goes for y’all when you take the test* but the dancing is definitely spinning clockwise for me and, as I say, I’m left-handed.

*(Note that the site with the link is dead now, all we have left is a static image. as above).

A little on, for another question, I get:

If you chose this picture, the right side of your brain is most dominant. The figure appears incomplete, without shape or direction. It offers the possibility of development.

Overall it reports I use both sides of my brain equally, which is strange because as these things go I’m left-handed and extremely analytical in nature. As such, needless to say, I tested it’s validity, tried it in a few browsers, gave wildly different answers – and always got the exact same result, a 53-47 split. That said… I wanted to copy a few quotes, went back and semi-randomly picking answers and it said I was 67% left-brained. Go figure!

The test is what it is – which is clearly a clever marketing campaign with little or no valid testing, just a fervent hope everyone will click on the adverts and generate a load of commission for them. Given it had over 24,000 likes when I looked I’m sure it was very successful.

When I looked just a little deeper, I find this on their website:

In July 2012, Sommer+Sommer added a ‘brain test’ to its website as a fun marketing tool. Anyone can take the test to find out which hemisphere of their brain they use more and whether they’re more rationally or emotionally driven. The agency’ owners, brothers Leonard and Gordon Sommer, had no idea the test would go viral worldwide just over a year later – and without a single cent of media spend.

Now, 2.4 million people in 229 countries and territories have found out which hemisphere of their brain is dominant. Around 80,000 people are currently taking the test every day, making it a huge attention-getter for the agency, which is now working on an app.

Several million page views is a lot of potential advertising revenue, not to say the core business it must have brought into the agency. Kudos to them, really, for a great campaign.

Do it, like it by all means, but rest assured everyone probably gets the same answer, in the end, there’s not enough test data for a true result.