The box oozes quality. Opening it revealed two heavy tomes, one a commissioned graphic novel, the other a high quality 224 page art book on the game. Along with these were the obligatory token mouse mat (cheap) and a metal miniature for the tabletop RPG fans. 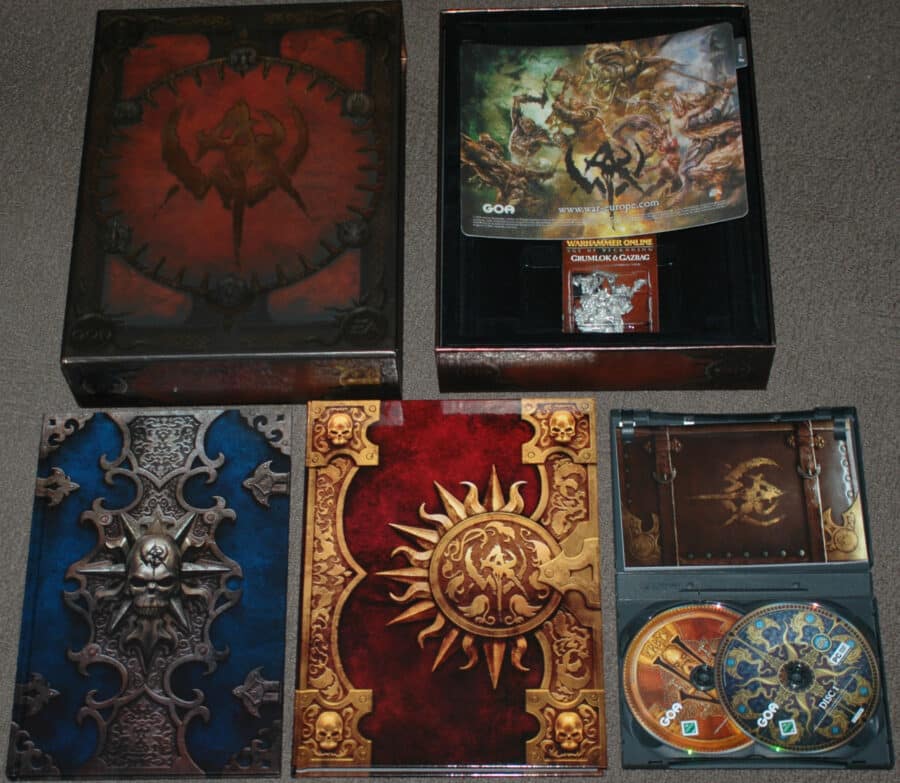 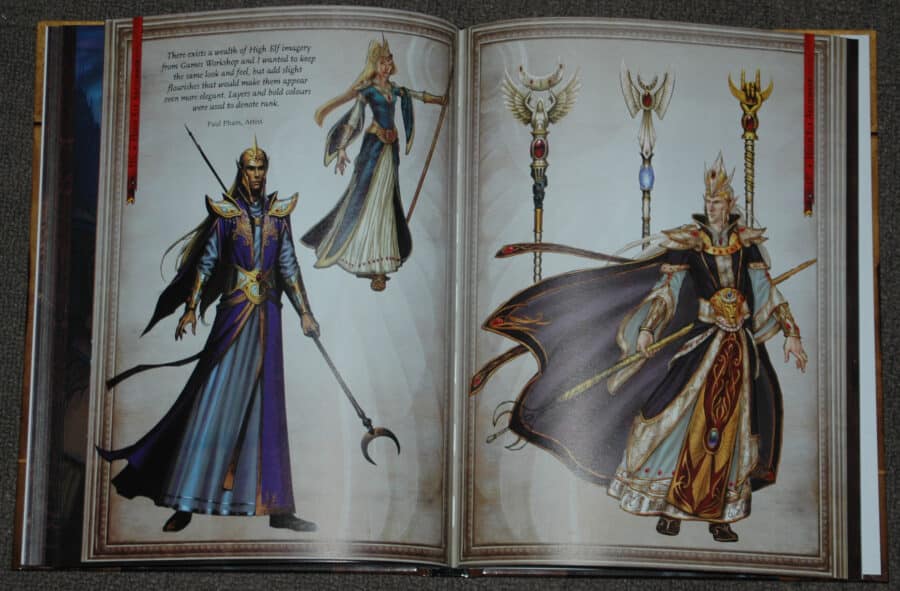 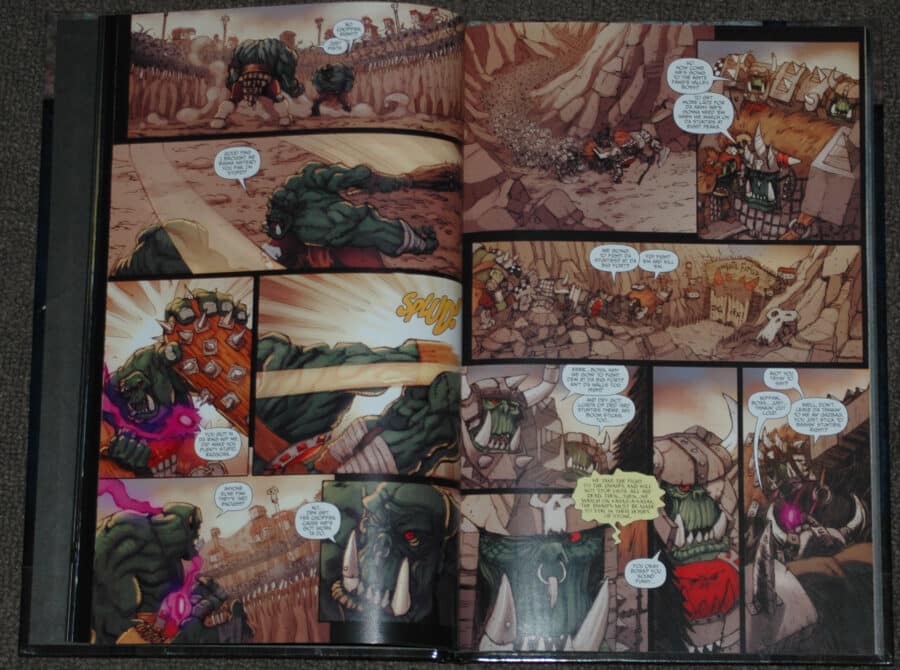 I was extremely impressed.

Then I shut down WoW and started to installed it.

See, that there should have been a warning light. When the opening message on a release version features an Orc telling you the Beta server is now closed…

Half an hour later I was checking to see if the install had hung. An hour later the bar began to move. A whooping 2 hours and 7 minutes later (on a fast machine) the install finally ended.

Don’t even talk to me about the registration process and the hassles I had getting it to acknowledge the serial number.

There’s also something seriously bugged about the patcher / loader for the game too. 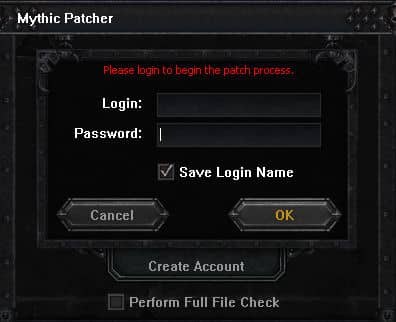 This toss-tails over to become: 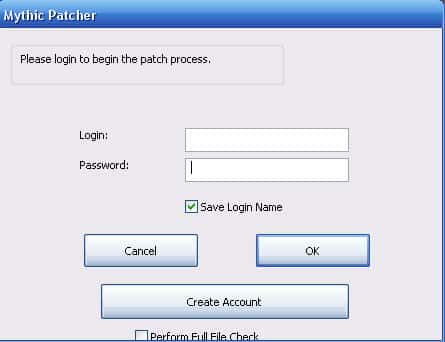 So, finally, three and a half HOURS later I can play the game. At last…

What the ? Please re-install???

This application has failed to start because d3dx9_34.dll was not found. Re-installing may fix this problem

So, I’ve paid all this money and set the 30 day timer on the game counting down – and I can’t even play because it’s so buggy. Naturally I went online to WoW and asked about – paints an ugly picture.

I am 100% positive that the clowns in charge of this got wind of the release date for Warcraft’s Wrath of the Lich King expansion (out 13.11.08) and panicked.

“Yes, yes, we KNOW it’s not ready, but we HAVE to get it out the door NOW. Once Wrath ships we are screwed. We need to hook player now…”

Family site so I’ll not say what I’m thinking, but I am utterly, utterly disgusted. I’ll comment on the actual game when – if – I get it going, but if you want my advice – don’t even think of installing this game for a month or three, because it is just not ready to ship, in my opinion.

I really wanted this to be GREAT as I’ve been a fan of Warhammer for many years and, going back to the early 80’s, even knew Game Workshop’s Ian Livingstone well enough to chat to in a bar.

Thought about that last night but I was too miffed to sort it. Despite having an up to date DirectX install, I had to install the copy that come with the game to get it working.

Now to see what the game itself is like.

Creating a character: OK, that’s nice. Like the music too

Choosing a realm: The sort on server type doesn’t work (meh :( ) and I’m not sure I like scrolling through all the server listings to find English.  Sloppy. 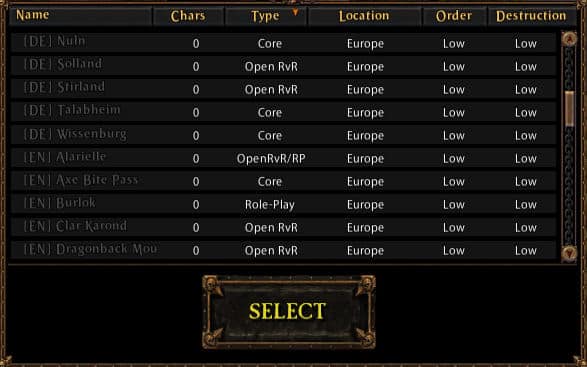 That you can choose the language (like WoW) should be a given mind.

World Population:
Ah, the joy of logging onto a MMO and not getting hammered with spam from gold sellers. Of course, as far as I could tell, there were only two people on the server and I was one of them. Early days yet, I guess. Personally I suspect a lot of early adopters got a few hours into the ridiculously long install, thought, “Sod that” and cancelled.

Playing:
It’s OK, but seems crude. You see the awe-inspiring intro’s and expect something drool-worthy. The reality seems to be some buggy graphic glitches and low quality shading and filtering. The whole thing has an unfinished feel to it. Played it for half an hour, got bored, went back to Warcraft, disillusioned. I will play the game more, obviously, but first impressions count and Mythic are out of their mind to release this unfinished product.

When I tried to play the second day – after waiting for more patches – then waiting for an irritatingly long load time – I thought it had lost my character, then I decided it has just hung. Finally (when it eventually  loaded) I realised the truth: The team that designed and signed off the character user interface need to be tarred and feathered and chased out of the games industry with a ruddy big warhammer. SPLOTTT

Bugs and omissions: As I said, I’d only play for 30 minutes or so before the bugs started coming out of the woodwork:

Another bug: You can’t scroll to the bottom of the user settings: 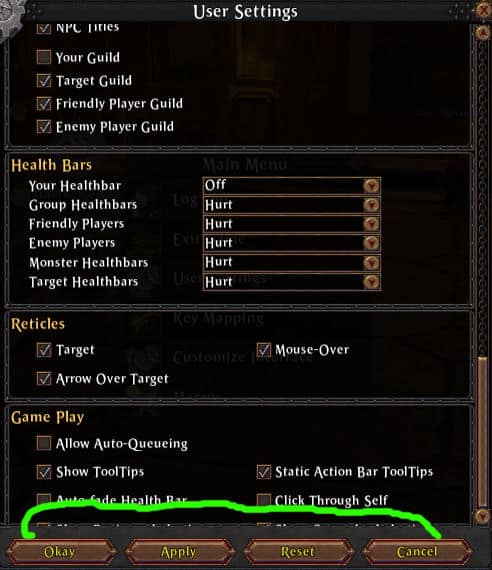 And another: Can’t enable EAX in user settings 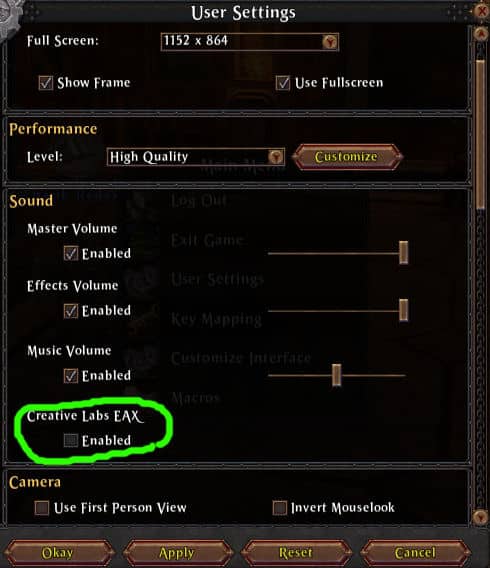 Final view:
If you are a die-hard Warhammer fan, give it a few months to get fixed and then look gain. If you are used to the smooth quality of games like Warcraft and GuildWars, forget it. You will hate it. I have been looking forward to this coming out for a few years, ticking the days off on my calendar as the release date got ever closer. I played tabletop Warhammer when it came out over twenty years ago. This isn’t Warhammer, this is just another attempt at D&D with Orcs, Elves and Humans.

Blizzard set the bar with World of Warcraft – I think Mythic aimed for the cat flap! From the hassles I had even installing it, to the let down of the graphics, to the glaring bugs, everything screams that it was rushed out the door in a panic. At this point I’m not even sure I want to renew my subscription after 30 days. And if I don’t the odds are this game is an epic failure, I can see a lot of people stomping back to the store and asking for a refund and most early adopters won’t even think about renewing their subscriptions. The attrition rate for this will be huge.

My tuppence worth: Most players will see this for what it is: unfinished. Fans and customers got shafted.

5 thoughts on “Warhammer (Online) – Or Warscammer ?”