Another Wednesday, another entire day wasted as Blizzard do “something” to the Warcraft servers during their weekly maintenance and countless players like myself cannot log in – again.

Here’s a quote from the forum’s that I can wholly relate to:

Quote: “I disconnect in high-population areas after any hotfix, patch, update, change, etc. My internet completely shuts down and a modem restart is required.”

WHY can’t Blizzard be honest about the issue? It’s been going on for years. At least add the reason for closing your account when you are so fed up to the back teeth of paying for a service you cannot use while they sit back and count the BILLIONS OF DOLLARS pouring into their coffers every year. 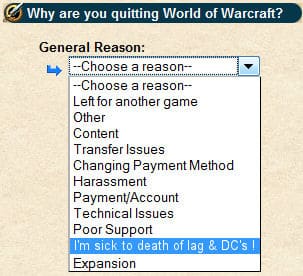 Reason for leaving : Sick to death of lag issues and constant disconnections.

A quick Google search returns: Results 1 – 10 of about 859,000 for You have Been Disconnected from the Server.

Naturally it won’t all be Warcraft, but a lot of it is.

If you go to their forums it is a barrage of people have the same issues week after week, year after year, to whom hired lackies trot out the same tired old excuses.

Look at the thread on the forums and you will see hundred’s, if not thousands of posts like the following:

And to every complaint there is a queue of hired monkey’s trying to cover for them.

If some cases it may be true, especially add-ons – but they just compound an existing issues.

Put in a nutshell, if you have a poor wireless or internet connection, there are days when the game is inaccessible. It you character was out in the wilds, fine. If you left all your alts in Dalaran – or as it is usually called “Lagaran” forget it and go play another game.

And when, week after week, month after you end up saying, “Forget it, I’ll play another game” then it’s time to stop feeding your money to them, ‘cos it’s clear they do not care.

For me, likely many, many others, I have to use wireless. Their standard advice is this: “Don’t”

Well that’s great. You take billions of dollars year in revenue and can’t afford the R&D to iron out a flooding issue your game causes.

Following pages of so-called fixes from a so-called technician one person observes:

Quote: “It’s strange that this only happened for the first time ever as soon as the love event was introduced. The net works fine on other games.”

WHICH IS EXACTLY MY POINT

Our hardware and internet go from being perfectly fine to faulty overnight.

“Yes, yes indeed, subscribers. I know it only happens when you log into WoW and nowhere else, ever, EVER, I get that, but trust me, Blizzard pay my wages, it’s your hardware, not ours. Honest.”

AND YET while the official forums trot out the said old excuses and FUD, the log in for the game tells you they know of the issues: 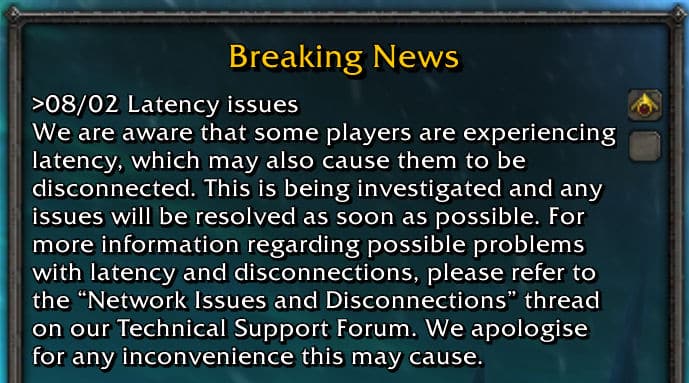 Just stop lying to us Blizzard. 11 millions users can’t all be stupid with faulty hardware. It’s blindly obvious that you are scrabbling greedily for more and more and more subscribers and simply never scaling up the hardware at the same rate.