Missed one or two tries due to that god awful cogwheel bug dc’ing us constantly but for the main part, I managed 10 runs a day, every day, just missed 5 because the problems were so bad I gave up on WoW for the day. Wish they would stop pretending there is no problem there and fix that patch day DC issue.

Flying Broom : 39 times
Some alts got it once, others six times. Pity this isn’t a permanent mount!

Sinister Squashing Pet : 34 times
Some alts managed to get it 7 times, my shaman never got it once and for the past few days has been trying to get it via the ‘trick or treat’ bags – and is running out of time to get one :S

The Horseman’s Horrific Helm : 4 times
REALLY low drop rate on this one. To make it more annoying, I wanted one for my warrior and instead got one on my mage and TWO on my shaman. :S The last one went to my deathknight

The Horseman’s Baleful Blade : 6 times
Again, really low drop rate. Got it twice on my mage.

and finally the mount… The Horseman’s Reins : 6 times
Rather irked over this as I wanted it on my main – mage – and he never got a look in, while the warlock got it twice. Friend was similar, he tried and tried to get it on his main – rogue – while another of his lesser alts got it 3 times. 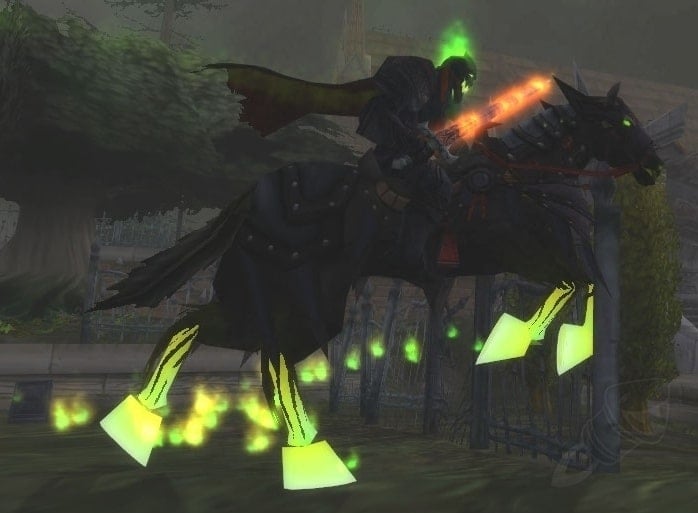 Blizzard loot tables suck, though I’m 100% behind the loot bags and wish they would use it in all instances – especially for the rare mounts which, left be honest, are forever being ninja’d. Would also stop all this, “Well I’m guild leader, I get it first”, nonsense that does go on, eh.

They eventually – finally – made mounts BoA, but there are still people that are trying to get it to drop. Loot tables, eh!

(Don’t talk to me about the (greater than) 50,000:1 drop rate of the Valentine’s rocket mount, gave up trying for that years ago!)