Farming the Staff of Herding in Diablo RoS

Remake the Staff of Herding, adventurer, and, at the invite of the Ghost of the Cow King, enter the secret realm of Whimsyshire, home to pots of gold, fluffy clouds that rain coins at a touch, treasure laden pinatas – oh yes, and murderous plants, brightly coloured but homicidal teddy bears and pink and purple unicorns that will also try to kill you on sight.

Why on earth would you want to?

Well, it’s part of the game and the secret cow level as well, so you have to, really, don’t you. Crafting the ‘weapon’ is also a Feat of Strength, giving the achievement “In the Land of the Killer Unicorns. Find the hidden level” which rewards a starry banner pattern and a unicorn banner sigil.

If you have the staff you can enter at level one, though be advised it’s historically a level higher than usual. How this has changed since patch 2.01 I’m not sure, but it’s still a little harder than other instances of the same setting, or so it seems to me.

There are also a couple of materials for legendary crafting and two unique items that can only be found here, namely the Horadric Hamburger which has a small change to fall from the piÃ±ata (about 5% – so about 1 chance it 150 runsâ€¦ Don’t get your hopes up unless you can tolerate repetitively trying for something.) 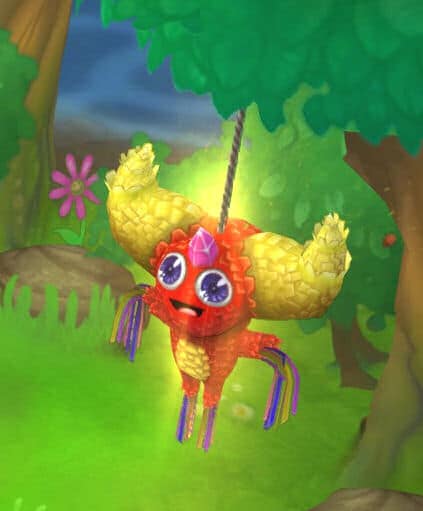 There is (or was) also the rainbow Spectrum sword:

The sword can*/could drop from the unique purples there, namely the unicorns Creampuff, Maisie the Daisy, Midnight Sparkle, Nightmarity, Team Unicorn (comprising Killaire, Maulin Sorely, R’Lyeh and Miss Hell) and the care bear, Tubbers. (Apparently this is a known bug and be fixed in patch 2.05 so that it dropped again, notably from Super Awesome Sparkle Cake).

*However, currently getting a lot of mileage at present on the forums and blogs, the weapon appears to be removed at present and – making it worse – the ponies themselves are either bugged or working as intended. If Blizzards intention is to make a great many players very angry with them, well it’s working! This is compounded by the fact these purple ponies, which rarely spawn are the only way to get a Mystical Source, an essential component to crafting the Sage’s Journey set. Just to put it into perspective – which Blizzard are aware of and apparently ignoring – people are talking (well fuming and ranting actually) not in terms of 60 minutes to get one but up to 60 hoursâ€¦

If you are persistent enough said ponies will drop the Mystical Source needed for the Sage’s Journey set, while a couple of the cuddle bears (Tubbers and Evil Oliver) hold onto an Eternal Power Capsule for the Arcane Barb crossbow. (This at least drops more readily).

If I’ve not put you off yet, and I shouldn’t really as, one would hope, Blizzard will in time fix the issues I mention, then we’ll continue. You’ll be pleased to know that all the materials for this can drop from level 1 in normal mode so can be farmed at any time.

Plans for the Staff of Herding
The blacksmith plans for this drop randomly from Izual in Act 4, though the rate is said to be annoyingly low. To take some of the pain away at least there is bounty on him.

Please note that is based on the recipe I have from before the expansion, I have since seen a recipe (which may be a new version) that only asks for Wirt’s Bell and the Gibbering Gemstone. Just skips a bit of farming is so. I can’t test this myself as, already having the formula, it won’t drop for me again.

Black Mushroom
This can occasionally be found growing in the center of a room in level 1 of the Cathedral (act 1). It can, I think, be found in adventure mode when doing bounties there but it’s just as fast to set the game to normal and run though it in campaign mode a few times until it spawns.

Leoric’s Shinbone
May occur in the ashes of a fireplace in Leoric’s Manor (act 1). Look for a pile of logs in the hearth, if they are there loot them for it. Again, can be found in normal difficulty and the best route is via campaign play. Set the quest to ‘Imprisoned Angel’ and teleport to Leoric’s Manor where you’ll arrive at the back door. Just clear a path through the cultists and check the fire grate for a pile of wood.

Liquid Rainbow
Once more, tied to the instance and not the level of difficulty so can be farmed easily, made even easier by the fact there is a bounty for the instance it’s found in. You are looking for a mysterious chest in the Mysterious Cave in Dahlgur Oasis. It is not always there but when it is it is to be found level 1, so do explore thoroughly.

Wirt’s Bell
This ‘drop’ is actually sold by Squirt the Peddlar in act two’s Hidden Camp, for 100,000g

Gibbering Gemstone
Be advised this is ‘bugged’ at present and has an extremely low drop rate from a rare Lacuni Huntress in level 2 of the Caverns of Frost, act 3, fields of slaughter. This in not helped by the fact she only appears 10% of the time in the caves, usually it is Zelusa instead, sometimes neither, once in a while it’s both, but as only Chiltara has the item it’s a long slow grind. My advice is don’t even try unless you have the bounty : Caverns of Frost. That way you at least get a little extra experience out of it.

As to entering this whimsical realm, you need the staff in your inventory (you don’t have to wield it) and follow the road from New Tristram to the Old Ruins. At one point the ghost of the Cow King will spawn and talk to you before opening the portal. The fastest route is take the way point from the Old Ruins and circle back. Can be opened in both campaign and adventure mode. Good luck farming! 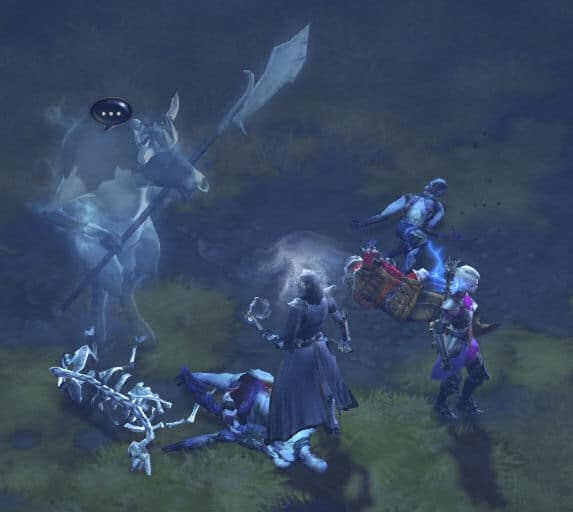 Just as a humorous extra, there’s a random drop legendary weapon that has a chance on hit to summon a herd of murderous cows. It’s notes state:
“This polearm was crafted by the finest ungulate smiths – its blade fired in the Hellforge, quenched in the rancid milk of the Cow King. In addition to its significant martial benefits, the Bovine Bardiche may also summon forth a veritable army of cows to fight on its wielder’s behalf”

Adventurer, I present to you the Bovine Bardiche: