Hardcore more is permadeath mode. If you die, every on the character is lost. So imagine my surprise when I discovered a level – with chests and generous xp rewards – where the designers forgot to add any hazards!

Within about an hour of me creating this page and forwarding it to the developers, they hot-fixed the level, as I suggested.

Anyway – at present – you can still loot corpses inside Wortham – but they appear to have taken my advice and put a load of spider eggs on the bridge just outside town and a few other hazards beyond that. If you take your hard core character there now expecting an easy time, you WILL most likely die.

Cautionary advice:
I’ve left this now obsolete guide in as, at the type of writing, it was interesting and remains a footnote in the game’s history. Be aware they have since taken note and fixed the loophole. If you try it now you’d better have a song playing in the background – an appropriate one might be:

What if I offered to level you to level 70 in hard core?

What if, to make it even better I offered to boost you at Torment 6?

What if I also guaranteed that regardless of lag, disconnects or anything else I could keep you alive. Furthermore, ignoring the time factor, I can get you to Paragon 800 – and still keep you alive?

What if, on top of all that, it’s not a cheat, nor an exploit, nor boosting but simply questing you can do on your own?

Catch?
Well, there’s one or two. Firstly, it’s more than a little repetitive. Unless you have the mindset that actually finds this relaxing you’ll go out of your mind with boredom. For me I can do it while listening to music and doing thinking about other stuff.

Secondly, you might be of the mindset that this is not right, I mean, what’s the point of playing HARD CORE is there’s absolutely no risk. And of course you’d be right.
Still, to the purists outraged at the idea – well, you have your friends giving you boosts. You have your maxed out level 70 Flawless Royal gems slotted into your weapons and armour from level 15. Ready for when you hit 40, courtesy of an alt, you probably have at least some level 70 gear and mostly likely to a socketed level 70 weapon with a 30 level reduction just waiting to hammer your way forward. Something to bear in mind before you comment on purity of play, eh!

Finally, while this is the game working as intended and most certainly not a cheat in any way, it’s also not precisely playing as intended so Blizzard may one day change it to make the practice less safe and/or less desirable. They could nerf the experience the quests offers and possibly make him spawn a lot less often. That however wouldn’t stop those that wanted to farm legendaries using this method. The only solution for them, which I’d have done myself, is to have the corpses spawn various maggots and swarms of flies to attack you, as happens in the Caldeum Sewers. Equally I’d have a few cultists still lurking on the roads, ready to pounce and probably a spider or two waiting for you at the hermit.

Just one more point to put across, and perhaps the reason I did this. It would be absurd to claim this way is wrong, then yourself mindlessly repeat act 1 bounties to get this ring, then over and over again to enter rifts for gear and experience to accrue paragon points. Yes, you might have fun with your friends or even random pugs (I certainly hope so), but when you get to paragon 800 and beyond it and you have bragging rights to full jade armour… take a moment to consider what better you could have done with your life than the hours – weeks – years – you’ve put in to get there. Whether this or WoW or AQ2, perhaps Farmville or Angry Birds, wherever you go you will meet people that own up to a lot of logged hours. 10,000, 20,000 hours is not uncommon when players get addicted!

Caveat : If you enter the caves or take the way point to the wrong area and get one-shot by a T6 mob.

Just as an aside, a friend of mine (with ten level 70 HC characters) offered to boost me, but I declined and pointed out my way was more efficient, which he considered rubbish. I was level 40 by then, he was 47 and doing rifts and split bounties. By the time he reached level 56 an hour or two later I was level 57. Needless to say I reached 70 before him. Just for the record, I levelled my first ‘hard core’ character, a demon hunter, properly. No passed on gear, no gems, just drops as I played. I still reached and solo’d Malthael by the time I was around level 38. Unless you take silly risks (as I later did with the hunter) HC is nothing special. It’s exactly the same as soft core but with more repetition of levelling characters.

Getting to the point:

Either play on normal (as I did) or get a friend to boost you forward to the quest ‘Trailing the Coven‘. At that point the evil cultists have been cleared out and only the corpses of the villagers remains. Talk to Leah to get onto ‘Enter the caverns of Araneae‘ – you need this to unlock the Town Gates.

When you cross the bridge there’s roughly a one in five chance that the merchant Rodger the Alchemist will give you the quest ‘The Sacrificial Hermit‘ to take a potion to the madman. 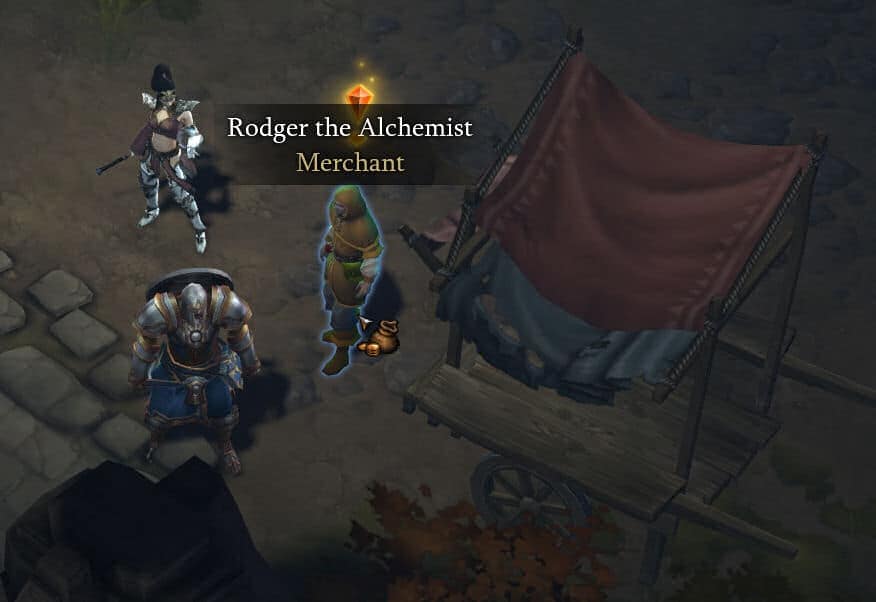 At low levels this single hand in will get you a couple of levels straight away. By around 15 to perhaps 30 each hand in will get you another level. Or if you like, a level every 5 minutes. After that it starts to slow as, while the quest rewards rises continually the experience you need to raise a level raises faster. By around 50 you need to do the quest twice to gain a level, by the 60’s you’ll need to do it four or five times. As a plus, you’ll also earn around 10 million gold for quest hand ins!

You can save time by skipping out Wortham itself is you portal out at the hermit and use that. Saves about a minute or so per run. 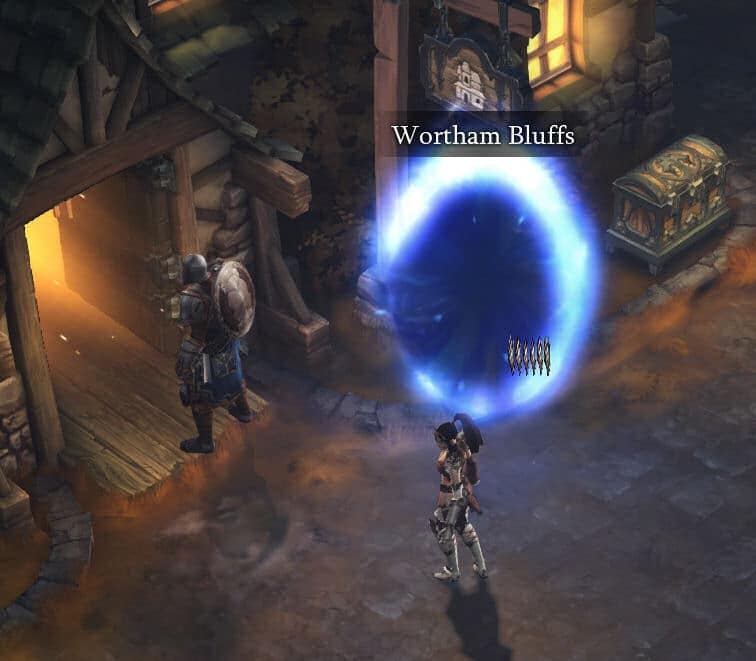 I do have screen grabs for all the levels, but here’s the highlights, including a selection of legendary loot drops: 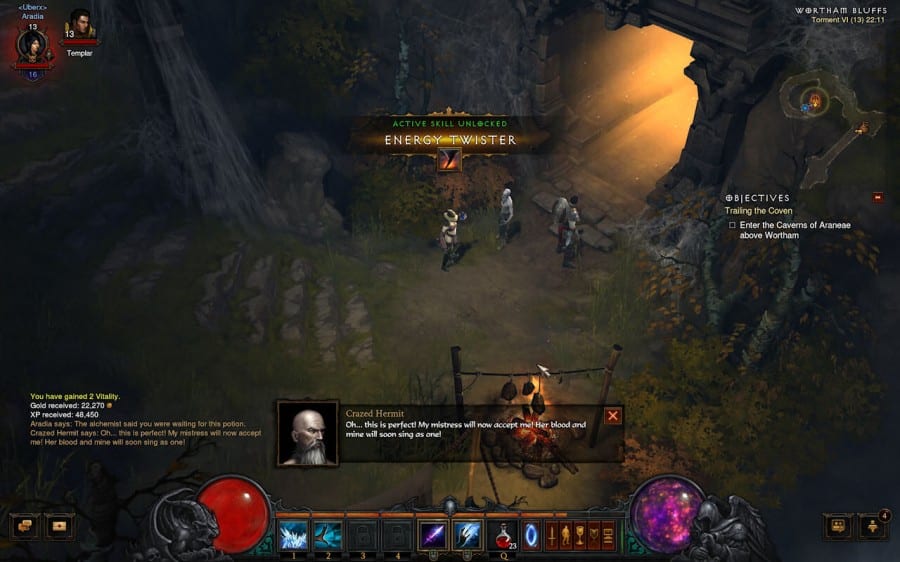 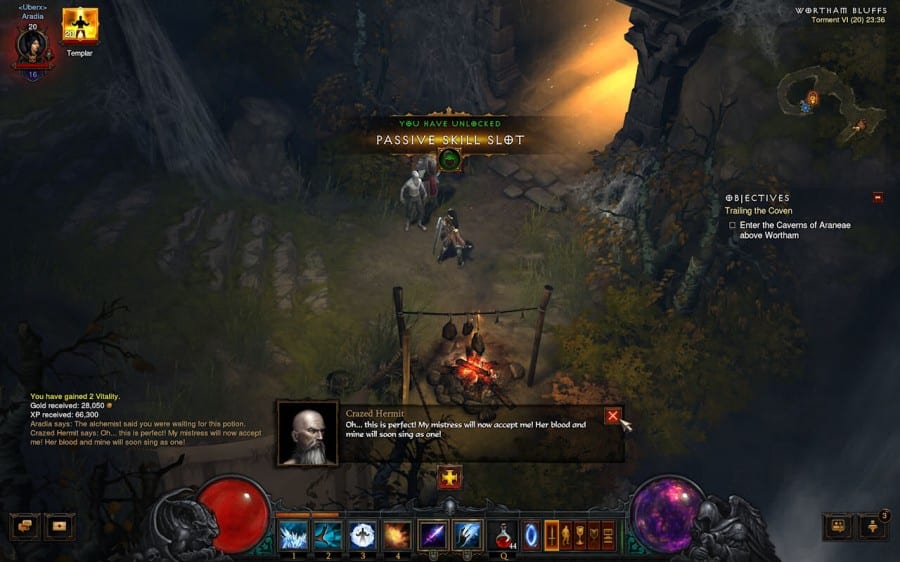 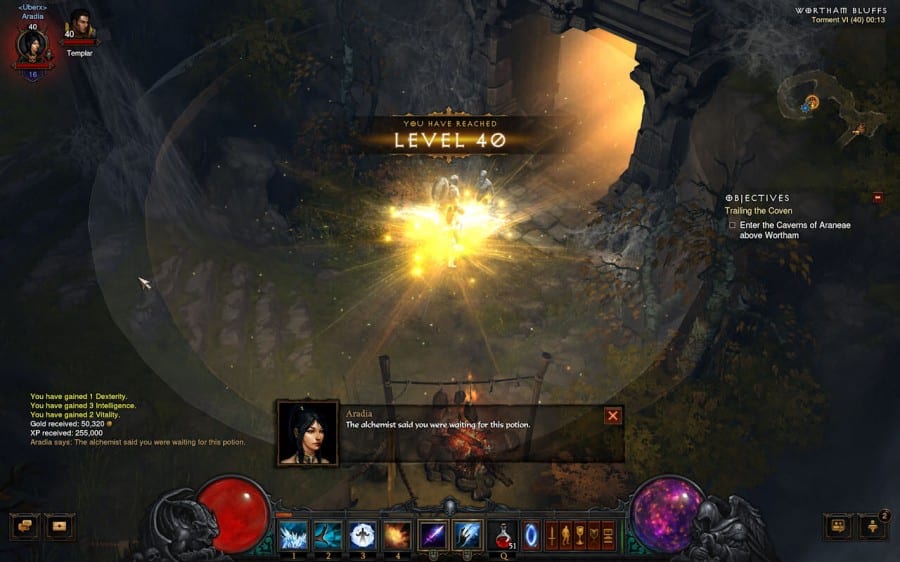 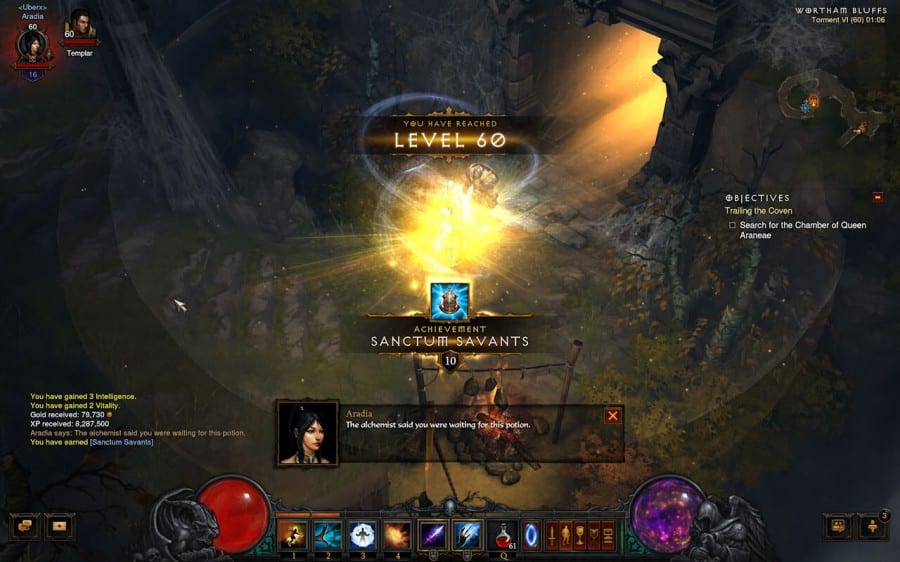 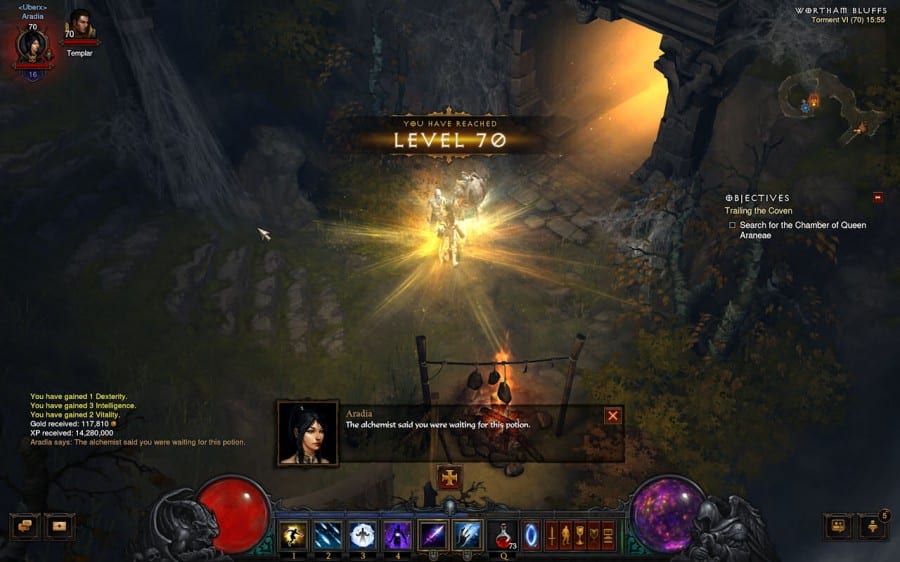 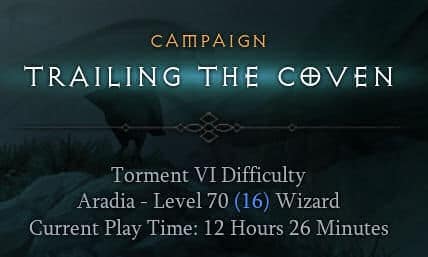 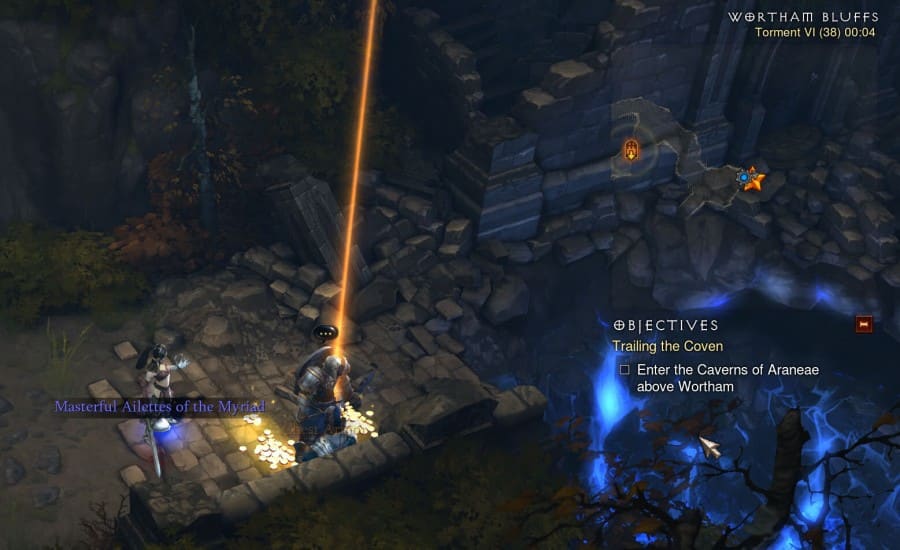 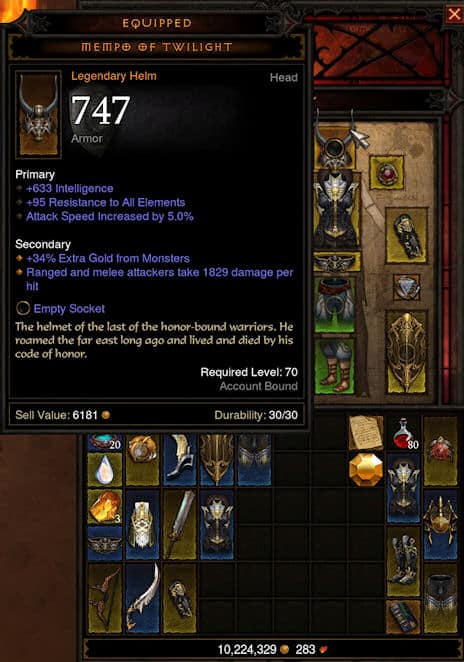 If you go down to the wood today you’re in for a big surprise. 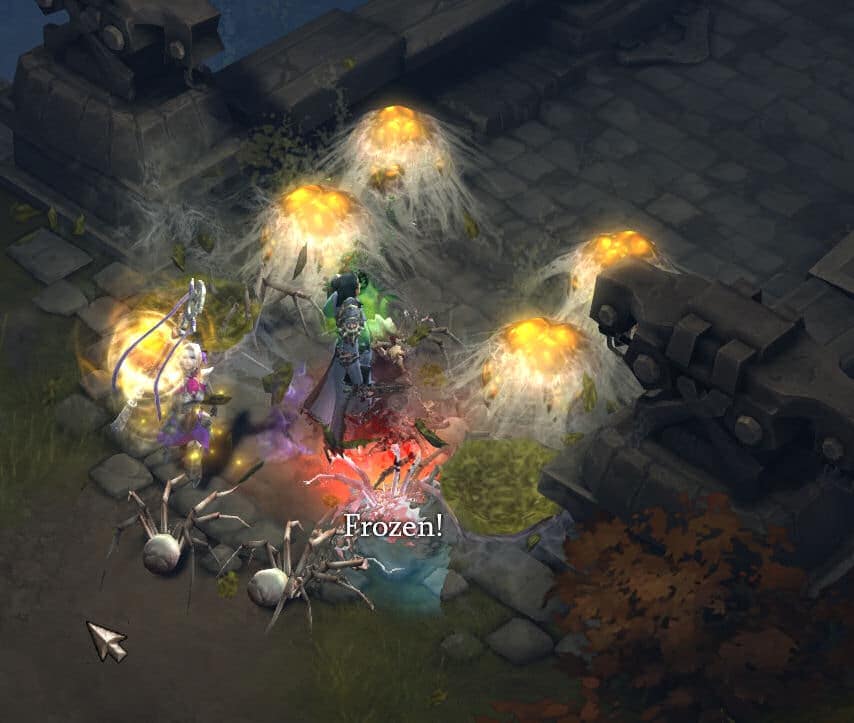