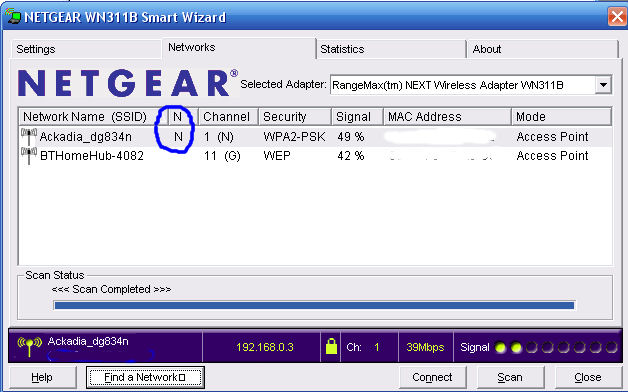 My thoughts on this hardware combination:

(Insert strings of your worst expletives)

Yep, that about sums it up. Darned thing has been flaky from the first day I got it, lately though it’s really starting to hack me off.

The router itself is great. The problem is the wn311b – and it’s getting worse.  After several annoying hick-ups and one or two replacement cards I was up and running with a very robust 85-105Mbs connection,  60-75% signal and 4-5 bars pulsing away on the Smart Wizard.

Now? I’m lucky if I get 40Mb/s, 25Mb/s is normal, the signal strength is down to 50% and barely one bar gasping on the wizard. Then, it just drops to 1Mbs and either crawls back up, or curls up and dies, disconnecting me and leaving me unable to reconnect to up to 30 minutes at a time. When it does bother to connect it manages to find the wrong ip ranges, locking onto 168.x.x.x  Sometimes it corrects itself, sometimes, not.

I believe it is supposed to do this when a DHCP server does not respond, the DHCP client picking a random ip in the 169.254.x.x but this doesn’t exactly tell me why it’s started doing it, or how to fix the issue. The only difference I can find at all is a neighbour has a  BTHomehub and, despite only being 54g is a really strong signal.

I’ve tried everything I can think of from firmware to channel hopping to messing with the windows and router settings. Nada, zip. Not just me either, trawling the forums and blogs a lot of others have similar experiences. Personally, I suspect that a) the network card itself is a tab flaky and b) more so, I strongly suspect the Smart Wizard is to blame. This doesn’t seem to be a problem with Vista, but seeing as Vista is a bag of horse muck I won’t use it myself.

(Take away Vista’s obscenely resource heavy gloss and your are left with a broken sound system and a room full of ‘legacy’ software and hardware that work great in XP and are landfill in Vista. Bah!)

Guess I need to play a bit more, can’t be doing with this!

After a lot of searching, muttering and general faffing about I think I have the cause – I reckon the router is overheating and frying the transmitters. Wouldn’t surprise me if one or two had even failed, though I think that’s unlikely, but I do suspect that’s where the problem lies. I shall try moving it and seeing what happens.