As a long-time Internet user, the first question in my mind when considering moving house isn’t access to public transport, shops, crime rates, parks, it’s: “What’s the broadband access like there?”

For our new address, BT quoted June the following year for fibre. By the time we moved this was put back to ‘July to September 2013’. On top of this, the ADSL we ordered got screwed up by admin errors and left us nearly an extra month without a connection. When they finally connected us – for a 20Mb/s line – we got under 500kb/s at best and even that would drop out for days at a time. I was fuming.

(I also found out, as we moved, they’d been overcharging me by 100% for years because I was on an obsolete tariff – and ‘No you can’t have a refund, you should have known!’. I was tempted to tell BT to get stuffed there and then and cancel the order but it meant yet another month without a phone or Internet.)

Many increasingly angry calls, passing weeks and several engineer call-outs were followed by them repairing and replacing two miles of copper between here and the exchange – each time threatening me with huge charges if it was my fault (that their aging cable was corroded). It was sorted, eventually, albeit with dropouts at first, though at this distance from the actual exchange our 20Mb/s dropped to only 6Mb/s. This was a fraction of the speed we were used to but adequate while we waited for the much televised Infinity fibre-optic in a few months. September 2013 drifted to 2014 and floated away to mid to late 2015. Maybe.

We estimate that BT Infinity will become available to you between April 2015 and September 2015. Please note that these dates have been provided by our supplier and are estimates. They might change because of factors outside our control such as delays agreeing cabinet locations with your local council or problems during the construction of your street cabinet.

I could have had this before we moved in but I still remember the service (or lack thereof) and dodgy practices of Telewest before Branson took over and decided to stay with what I knew worked OK, while I waited, and waited for British Telecomm.

Finally gave up last month and ordered a Virgin line. The engineer arrived. Then three more vans. Several hours later they all left, promising to return a few weeks later and try again!

The things you learn, eh. Apparently Virgin have been losing millions a year due to other contractors (council, gas, water, etc) digging up roads, cutting though or concreting over other providers lines and basically going, Crap, Fred, fill that hole in and dig over there, we were never here!. Lawyers are doing OK out of this as everyone sues and counter-sues everyone else for this.

This month then, they returned en-mass. I think I counted four vans and six blokes for the digging and wiring crews as they pulled up cable covers between here and the nearest cabinet and, where necessary, cut new grids. Fiddly job I guess as it took them 8 hours to replace a length of cable to a cabinet that I can hit with a rock from the garden! An hour later more installation engineers arrived to finish off the job, in the dark. All said and done, it took at least 6 vans and 8 or more men to connect one cable!

A day or so later my wife asked if we’d had any calls and no, nothing. We were even free of incessant PPI, conservatory, survey and solar panel calls! Well, until a friend emailed to see if we were OK as no-one was answering the phone. Couple of tests later and yep, we can ring out, but that’s it.

This morning yet another Virgin engineer come out to check the line, does a few tests, talks to their teams and scratches his head, saying, Well, they’ve never heard of this either.. My line is live – with two different providers. I can ring out with Virgin, but only receive calls from BT. In a changeover this is normal for a few hours as things propagate, but in my case things were raised, cancelled, raised again and lost in the ether.

Assuring me all would be normal – but give it up to ten day – he left. I got my breakfast, turned on my computer and stared at the ‘!’ lingering above my network button. Whatever they did to port the phone, killed the Internet, so yet another engineer is returning tomorrow.

My Internet now looks like this, below, as I had to reconnect to the still live ADSL router:

Comparing BT’s ADSL to the cheaper cable offering from Virgin was an eye-opener, though in truth, in regular usage, we can’t see the difference. It does make a huge difference uploading though.

My poor rack cabinet is a nest of routers, hubs and patch panels until this is sorted. Or a more cluttered next of wires than usual at any rate!

If you’ve not checked your connection in a while, try Ookla’s Speedtest. (Free, if you wondered).

Update: Virgin engineer came around first thing this morning (next day) and tracked the problem to the cabinet. Someone has done another job in there and unplugged my line! Sorted now and back up to 156Mb/s down, 12.3Mb/s up and 14ms ping.

You can also test your line speed for free with Comparitech.

As an added benefit, they donate $0.01 for each user that runs a test, with funds raised going to ‘Computers 4 Africa’ and the ‘Electronic Frontier Foundation’. 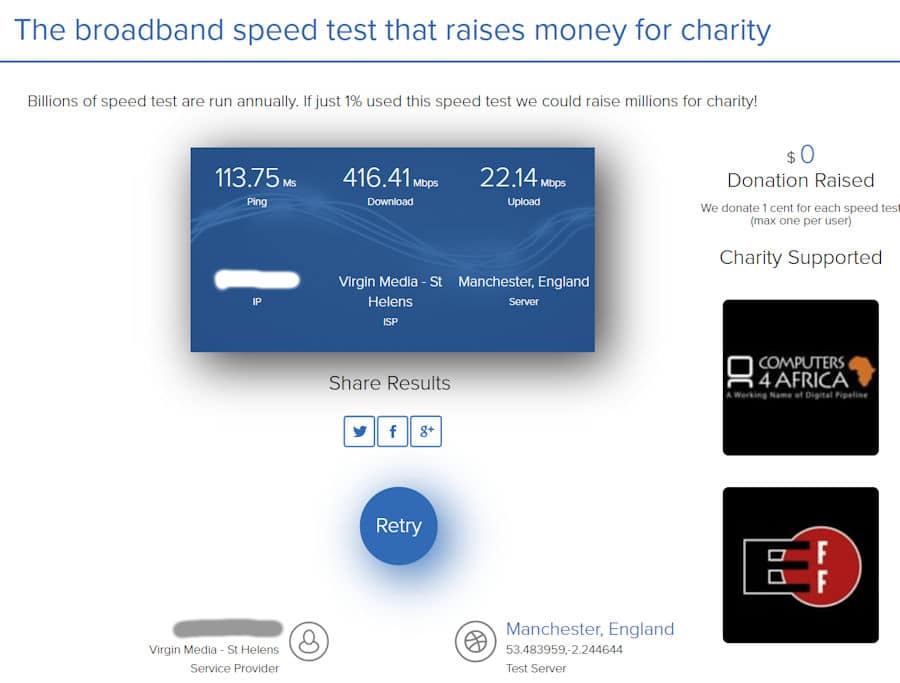