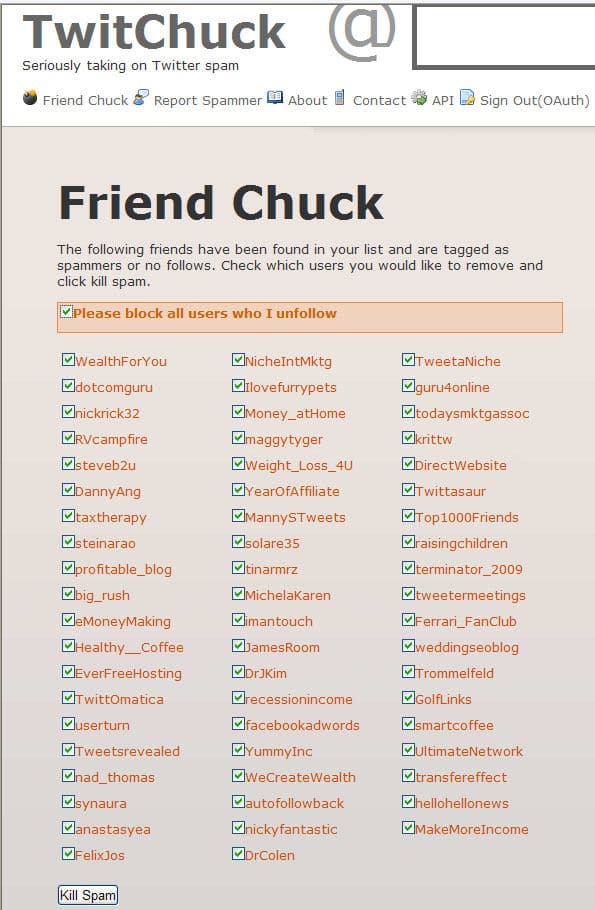 Today I am taking an unusual step – using automated software – namely Tweet Spinner to find followers. If should however be pointed out that each time it adds a few I manually check them!

I will only be using the free version but the paid one has a few nice features to filter out a lot of the junk. Primary reason for this is to help @muudboard develop the anti-spam features for his [ Twitchuck .com ] web site (since closed). I do this not because I get anything out of it, but because I genuinely think the guys doing a great job – one that I very firmly believe Twitter should be doing themselves, but clearly are not!

This is also an acid test for me for Tweet Spinner and not a reflection that I think it will be full of spammers. It’s merely a cheap, fast way to bulk up on followers for a few days.

*(Minutes later) Meh. Paying for the Pro version at £10 a month as it lets you block out numbers.

One thing I’ve discovered, though hardly unexpected as it has been equally true for years in email, forums and blogs, it that is you filter user out users with alphanumeric names (like anna4623) you cut spam dramatically as it kills all the randomly generated names.

If you have some here after being added today (7pm gmt 7/7/09) then yes, you have been “harvested” by automated software! Meeep! That said, you will only have been added because you match things I’m genuinely interest in chatting about. I’m NOT selling and if you are you can take your bag and beggar off now, hmm!

I’ve used fairly tight parameter too, like over 100 followers, no large margin and so forth. Not as tight as I’d like though. Can’t find the setting to ignore anyone that used numbers or certain words and verbs for filtering. (Found it!)

Keywords to be used:

On the ones I’ve trusted Tweet Spinner to add, several have already been removed after a manual check, most for not even bothering with a profile image, 2 or 3 spammers and the rest languages I couldn’t read. (I can struggle with several, but German, Russian, Greek and Asian languages, nope).

Interestingly, it shows I already share 2.5% of both Chris Garret and Jason Bradburys followers. Presumably because of the overlap in interests.

More on this in a few days.

(After adding a little under a hundred, then remembering…)

Twitter Counter currently rank me 6,583 in a world. Not bad for 45 days of manually adding and vetting everyone until now!
[ twittercounter .com (since gone) ]