I did comment on this a few days ago and thought I’d return briefly to offer my thoughts.

Can’t comment on the greatly mouse movement and response sadly as I never did get it to work*, but from an ergonomic point of view it was really comfortable to hold, even for someone left-handed like me.

*Internal fault with the sensors, perhaps. The mouse itself is detected, it just doesn’t work. Tried it on a couple of computers, no joy. Not having much luck with hardware lately :(

For the wireless aspect, it’s more a case of less wires than wireless, though this is probably the case with most such devices. Tried with the keyboard though and found it rather handy to be able to lean back and type with it on your lap while faffing about with over things at the same time.

Talking of wireless, the Bluetooth does operate in the same 2.4Ghz range as most wireless networks, adding to the noise from cordless phones, microwaves etc. Actually worked in my favour as it destroyed a neighbours network, improving mine, but I did notice the signal cycling from low to high, momentarily dropped the connection for a split second before picking it up again. If you are having problems you’ll need to find a channel on your router that doesn’t conflict heavily with the Bluetooth.

Forgot to take a photo, but the backlit effect for the keyboard is nice, if you turn it up bright. However, not  impressed with the legibility of the letters on the keyboard itself. I can touch-type so it’s not a huge issue, but it irked me all the same. It does look fine in daylight, but at night, in a darkened room, the lack of contrast between the black letters and silver keys makes it hard to read. That’s why you have the lit keyboard, I guess. Still.

Not half as much as the lack of a separate keypad and especially a number lock though. The keyboard is the same length so there’s no real estate saving for desk space. For me, and I assume many gamers or number users like accountants, this can be off-putting and slow you down. In my opinion they would have been better to refine their ‘MultiMedia’ keyboard. 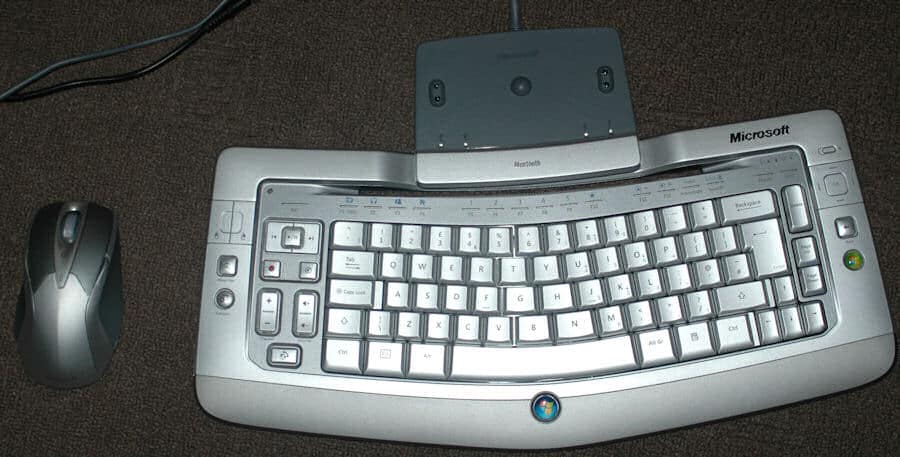