This data is largely compiled from over 4.5million users from the excellent work done by Hubspot (@Hubspot) and graciously shared in this .pdf document : State of the Twittersphere June 2009
(To discuss their report on Twitter use hashtag: #SOTwitter)

Personally I am very reluctant to follow anyone without a profile.

I also work on the principal that 95% of all accounts are in the hands of spammers and self-interested affiliate marketers etc aggressively pushing one way links. As such I also don’t automatically believe or trust any profile unless everything else bears out.

However you look at it, half the population of Twitter is dormant and most of the other half is spam!

Hubspot are more forgiving and use the following criteria to assume only 9% is dormant:

Reversing the first set of figures, we get:

The document also give graphs for things like distribution by tweets by hour – but neglects to give the timezone basis, rather a critical omisssion, really. It does however show that tweeters are most prolific on a Thursday.

However: the report glosses over a few home truths, namely:

Of the measly quarter that bother with a profile many will either lie (especially the spammers) or simply put whatever comes to mind in, making any demographic data unreliable beyond a vague guide.

Of the third that enter a location many will either lie (again, usually spammers) or be obscure. So we have Americans claiming to live in London, England and Londoners living in places like ‘Neverneverland’ and ‘Twitterverse

And the rest? A huge percentage of the ‘homepages’ I see tend to be affiliate link. Meh!

One figure we don’t have if that number of accounts – the percentage of accounts that are banned.

As show below in the Twittercounter graph below, @twitter’s account has grown by over a million in a few short months: 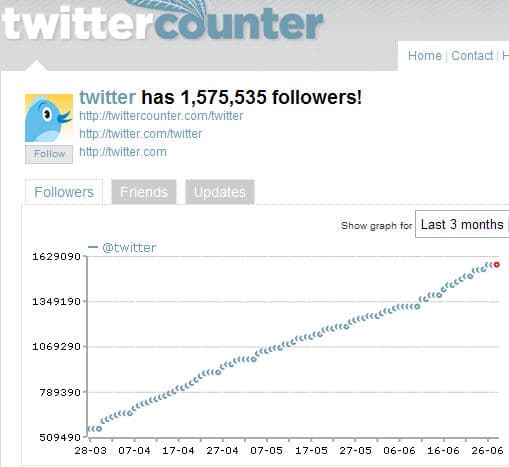 I have doubts about the accuracy of the following two graphs from Twitteranalyzer, other than them backing up the feeling that the continued exponential growth is not with active users. I could be wrong, and again am deeply cynical, but I suspect a vast number of accounts are actually dormant ones prepared by spammers for ongoing campaigns. In the same way email has been over-run they are laying down literally millions of accounts and bringing them into action as others are blocked. 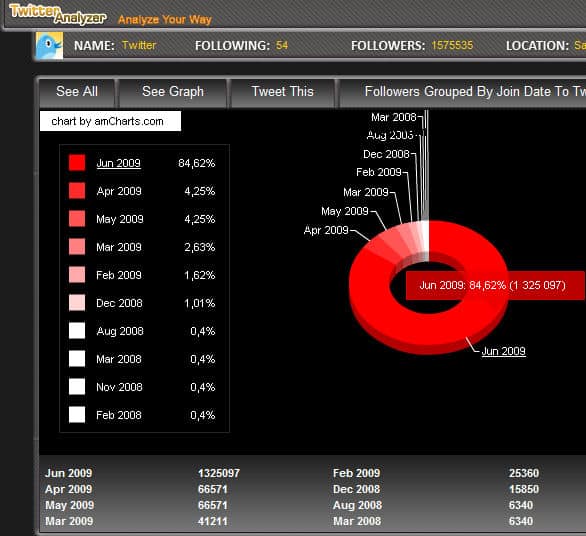 Below we can see that a massive 92% of followers, new accounts, have less that 20 followers.

Graph of Twitters followers showing their own follower base: 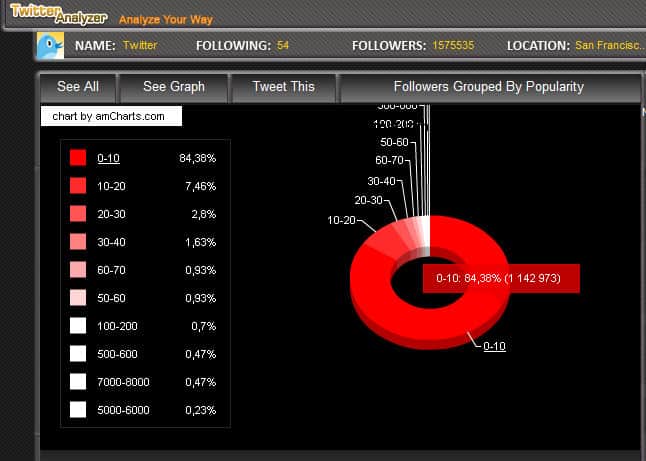