I actually answered this first on YahooAnswerUk, but I reckon it belongs here too as it will be useful for many.

In reply to the question:  Twitter.com What is the deal? Can someone tell me how twitter.com works and why do people like it so much.

I’ve only been using Twitter a few days and can already see the potential. How it works depends how you want to use it, really. In essence it’s a microblog, given the 140 character limit. Ignoring the fakes, wannabes, bots and spammers and associated trash it is or can be:

a) A way of following and chatting with like-minded people

b) A way of stalking, errr following, your favourite singer/band/whatever

d) Businesses and other can and do use it for promotions. Dell for instance offer special deals on Twitter.

e) Chatting with friends instead of using txt messaging. In a similar fashion some games companies, for instance, hold conversations with players over implementing features on a new game. Games developers to, in close-knit groups, share ideas and links of interest.

And yes, a lot of it is mindless gibberish of this variety

“Made a cup of tea”
“Going back in the kitchen, forgot dunkies”
“Searching down sofa for remote”
“Off out”

That said, the same can be said of millions of blogs, websites etc.

Also, like everything else, you have to watch for fakes and scammers. The pretenders are invariably found out, ridiculed and booted out, but you still get them. The reverse can be true mind, apparently, with so-called celebrities using their agents, secretaries and PR’s to churn out ‘tweets’ to their fans. If they cared they’d do it themselves!

As for the workings, the works of it is pretty much down to:

Using @name (e.g. @ackadia) to name drop or mention another person on Twitter (ie Joined Twitter after @ackadia recommended it to us)

Using RT (retweet) to give credits and/or repeat something.
(e.g. RT The My Yahoo! team is looking for “productivity apps.” Got an idea for one you’d like to build? [ link ]

Using #word for topic keywords (e.g. Writing a blog on #discworld if anyone is interested) (I’m not, myself, just an example.) I don’t use this anywhere near as much as I could/should, but a GREAT guide to it can be read here: [ twitip .com ] Twitip’s guide to Twitter hashtags. (It’s dead site now).

Hashtags are used to identify a topic on Twitter. Add # to the front of a word to make it a topic. Example: #followfriday

And finally using:
d username message to send a private post direct to a follower (they must be following you for it to work). Can be as well to use the Direct Reply link to the left mind as this gives you a drop down list of the people following you.
(e.g. d ackadia Cheers mate!)

Out of interest, Yahoo.Answers UK uses Twitter to announce some questions.

One last thing, creating a custom background… Assuming most people are now moving towards bigger screens and using 1280×1024 resolution or higher (which they are) you want to create an image roughly to this size: Dimensions: 2560x600px

This accounts for all screens up to 30″ at full size and still fits within the filesize limit.

The reason for these dimension is this: If you are using a big screen and the background image is 1024×768 or maybe 1280×1024 it looks awful because it gets cut off.

That said, depending on your design this can be reduced as small as 200x300px (width by height).

My own, shown below, is a lithe 207 x 383 .png weighing in at just 45kb. I can get away with this by setting the background colour in Twitter to match this.  If I was creative I could add a bar and maybe blend in extra details to make it run the (maximum) width – but not height – of the screen. You can try using a large photo (I tried a waterfall  and star field) but anything over 1600×1200 won’t really fit as the image size can run into several Mb – and your limit is 700kb. Also bear in mind bigger images add to the strain on Twitters bandwidth, and can be unpopular with people on slow connections. 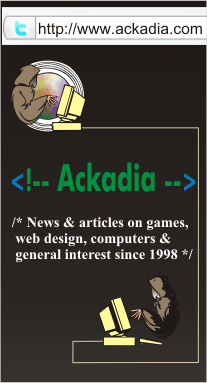 Haven’t used Twitter (or social media in general)* in many years, though my account, @ackadia, is still live.
(My Facebook page is still active, though for shares rather than personal posts)