Does the EU intend an army?

“Also if you believe everything in the papers (not saying I do) the EU have been planning an EU army on the quiet, if anything smacks of Nazism that doesâ€¦”

â€¦ and answered it there, but it deserves a closer look. This is for the insouciant Remainers and for the tunnel vision youth brigade that ridiculously claim us old folk ‘ruined their lives’ by our Leave votes, and are convinced the EU is some harmonious ideal with only their best interests at heart.

Juncker’s EU Army! Alarmist talk? Or alarming? What are the facts?

Actually, yes, the EU army is genuine, Juncker has repeatedly tried to get a proposal passed, giving him control of an EU army “to tackle the problem of Putin” 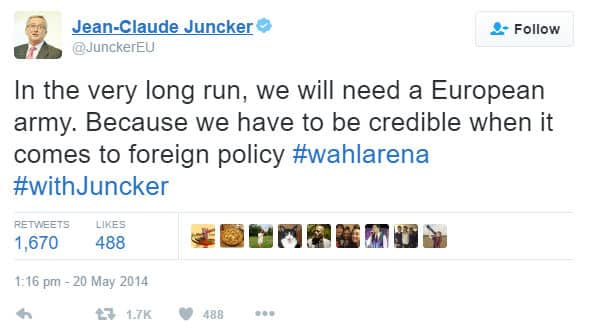 Similarly, look at the countries Juncker wants to annexe next, such as Serbia, Bosnia and Kosovo (BBC 2014: EU enlargement: The next seven)

Or from Debating Europe (2014): Should Ukraine, Georgia and Moldova eventually join the EU?

In 2014, the European Union signed sweeping trade and association accords with Ukraine, Moldova and Georgia. The deals are designed to cement economic and political ties between the EU and the three former Soviet republics, to the chagrin of Moscow

It’s all a game of RISK to them, annexing country after country for in some OCD control freak madness!

From the horse’s mouth, on expansion: European Union countries

On the road to EU membership: Candidate countries:

On the road to EU membership: Potential candidates:

*This designation is without prejudice to positions on status, and is in line with UNSCR 1244/99 and the ICJ Opinion on the Kosovo declaration of independence

Debating Europe (2014): Which country should join the European Union next?

At the end of the article it asks:
“Which country do YOU think should join the EU next? Is Montenegro ready to join the club? Should Iceland resume membership talks? Maybe you think the EU is already big enough, and should close the door to new members? Let us know your thoughts and comments in the form below, and weâ€™ll take them to policy-makers and experts for their reactions.

If, as they want, they add the Ukraine and Georgia it will start to get nasty.

Belarus Digest, 2013: Do Belarusians Want To Join The EU? It is safe so say that if the EU try to add Belarus – Putin will go ape shit!

In demanding his army and in aggressively pushing to capture Russian territory this lunatic truly is edging Europe towards World War Three. That’s not conspiracy scaremongering; it’s a cold, certain fact. If the EU gets its proposal for an army and continues its bureaucratic aggression towards Russia, Russia will retaliate. This, amongst many other reasons, is why the EU has to be disbanded!

Remember, the EU and it’s banking troika (the EC, IMF and the ECB) is not some flash in the pan news story, it’s not a political party you can remove in four years, or even eight years, it’s a vast, secretive and powerful conclave that’s been operating since the end of the second world war and, year by year, gains a little more power, a little more territory, a lot more money. Last I looked it was pulling in Â£130 billion a year, with payment demands going up year on year. Yet the EU members states are in hock to the tune of â‚¬12.78 trillion, a figure accelerating upwards by the second.

It’s no good saying It won’t happen in my lifetime when you are talking about an organisation that plans decades ahead! In its 60-odd year history the EU has, so far got:

These are all the things a country needs to be a nation: So why does a bureaucratic group allied to banks need all these things – when it was proposed simply as a common market to agree on trade deals??

Just take a look on Google, on timelines, on maps of countries added year by year, and countries in talks with the EU. The map below, used with permission*, shows the current and (most) prospective member candidates.

Put yourself in Putin’s shoes – how would you feel about a totalitarian regime annexing Moldova, Ukraine, Georgia and pushing into Belarus; its army recruited from 27 or more countries in marching distance of Moscow? Happy and welcoming?

The map the link takes you to is interactive and gives detailed information on each country.

*(You are free to use this map for educational purposes, please refer to the Nations Online Project.).

Related stories in the news

Financial Times, May 2016: Germany to push for progress towards European army (by Alex Barker in Brussels and Stefan Wagstyl)

Initially scheduled to emerge shortly before the June 23 referendum vote but now probably delayed to July, the draft paper seen by the Financial Times outlines steps to gradually co-ordinate Europeâ€™s patchwork of national militaries and embark on permanent co-operation under common structures.

â€¦ the paper calls for â€¦ a joint civil-military headquarters for EU operations, a council of defence ministers, and better co-ordinate the production and sharing of military equipment.

The creation of a European army is a long way off, but it is a strategic necessity to implement important steps to pave the way towards it now,

Also on IBTiimes, March 2015: Jean-Claude Juncker: The EU needs an army against Russia

Calls for an EU army were condemned by Conservative MEP Geoffrey Van Orden.

This relentless drive towards a European army must stop. For Eurocrats every crisis is seen as an opportunity to further the EU’s centralising objectives, he said.

Again, in the Express, (May 2016), Female Italian EU boss behind migrant chaos set to order BRITISH ARMY into battle

â€¦ and in the Daily Mail: Invasion of the EU army! Worried Euro tanks may park on our lawn, Minister? Too late… they’re already here – Exclusive photographs show ‘Euro army’ tanks and vehicles in Britain.

I mean, we have our national armies and NATO, right? Not like we’d need, sayâ€¦

Can we have an EU Army?
Non! No!
OK, can we a few ships, just for peace and civilian rescue missions?
Not sure, but if it’s just for that, we can agree to the proposal.

Can we have an army?
Non! No!
OK, can we have a few planes, just for peace missions, relief drops, et cetera?
Not sure, but if it’s just for that, we can agree to the proposal.

Can we have an EU Army?
Non! No!
OK, how about a few officers, just to liaise with the member states’ military forces?
Not sure, but if it’s just for that, we can agree to the proposal.

Can we have an EU Army?
Non! No!
OK, how about if we just put a little livery stickers and badges on member states’ military forces? Just a logo, we won’t control the forces, they will still be in the hands of the member states?
Not sure, but if it’s just for that, we can agree to the proposal.

Can we have an EU Army?
Non! No!
But you have already allowed us army battalions, an air force, a navy and a strategic command centre, where’s the harm in combining these?
Not sure, but if it’s just for that, we can agree to the proposal. I mean, the EU’s been OK so far, what could go wrong?

With possibly the cruellest of irony, France and Germany chose the 100th year armistice ceremonies to effectively and quite literally call Russia, China and the USA the ‘enemy’ and quote a threat to their new world order (?) and used the timing to call for the EU to be made into an empire, and establish an formidable army to counter said threats. But, of course, says President Macron, it would be a peaceful endeavour.

Right, so in the same short dialogue you state your new empire needs an army to counter the threat of America – while smiling to the cameras as you shake the hand of the President of America – then you tell the press the US still owes you for helping them get independence (from Britain) centuries ago (while President Trump is reminding you that the rest of the world saved you, France, from German occupation in WW1 and WW2). Yep, can’t see how that would ever go pear-shaped!

FRANCE has further risked the wrath of Donald Trump after its finance minister called for the European Union to become an â€œempireâ€ superstate to rival the United States and China.

Bruno Le Maire came out in support for French President Emmanuel Macronâ€™s call for a â€œreal European armyâ€ but suggested Brussels should go one further and establish itself as an â€œempireâ€. Mr Le Maire made the shock admission after the US President branded his French counterpartâ€™s comments â€œvery insultingâ€ and suggested EU countries should instead focus on living up to their Nato spending commitments. it’s about Europe having to become a kind of Empire, as China is. And how the US is, the French finance minister told the Handelsblatt newspaper.

Europe should no longer shy away from using its power and being an empire of peace.