Politics in the UK is broken, what can we do? 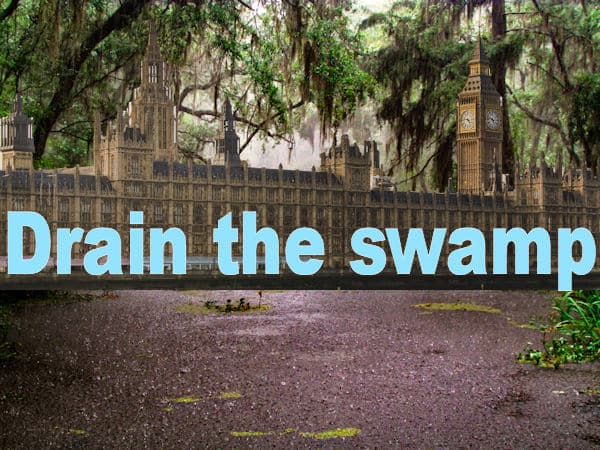 Vote again until you get it right, or be ignored

Brexit or not – and there WILL be hell to pay if not – I’m thinking ahead to local and General Elections.

The EU has a long history of either ignoring referendums, or telling nation states to vote again until it gets the “right” answer…

To name but a few, the Danes’ and the Maastricht Treaty of 1992. Ireland and the Nice Treaty of 2001. In 2005 the French and Dutch rejected the ‘European Constitution’ – the EU just made a few small changes and renamed it the Lisbon Treaty, eventually getting it passed. Most notably, in 2008 when Ireland rejected the Lisbon Treaty, they were told to come back with the “right” answer. That is not a democracy; it’s tyranny.

Now consider the seated political parties in the UK â€“ all but the DUP pro-EU.

SNP?
Scotland was given a referendum on independence, on leaving the UK. They said they’d like to stay, thanks. The SNP have ever since been pushing for a second referendum to get the ‘right’ result THEY want.

Vote again until you get it right.

While Scotland was heavily pro EU, the UK as a whole is not. Thus the SNP have voted against Brexit at every possible opportunity.

Vote again until you get it right – even if you don’t live here!

Labour
Labour is so heavily pro-EU you can count their Leave MPs on the fingers of one hand. They are relentless in rejecting Brexit, in demanding a second referendum.

The fact that most of their constituents want to leave the EU doesn’t matter, THEY don’t want to. They are supposed to be our representative, but what THEY want, what THEY think is all that matters. Again, that is tyranny, not democracy.

We had the referendum. They asked how we felt, they promised to honour the result. But only because they thought we’d vote the “right” way. The shock to them, to mainstream media, to all parties at the time was palpable.

In 2017 Labour could have stood on a manifesto of ‘Remain’ – but they didn’t because they KNEW they’d lose millions of votes and half their seats. So they lied. We know, with a few honourable exceptions like Kate Hoey, that fully 95% of Labour MPs reject the referendum result. Labour could have been honourable, could – like the Lib Dems – have stood on a manifesto of Remain. Instead, they choose to lie. If Labour had stood on a policy of Remain, I wouldn’t have agreed, but I’d have respected them. Instead they lied. They deliberately set out to manipulate and deceive voters. Power matters, honesty and honour do not.

Sound familiar? Jean-Claude Juncker profile: ‘When it becomes serious, you have to lie.‘

Labour policy: Lie if you have to, ignore the referendum, or get them to vote again until they get it right.

Conservative party
Except for the ERG – who are pathetically, quietly folding, surrendering to Mrs Mayâ€™s WA – you can say the same. The majority of Conservatives stood on a manifesto they fully intended to either ignore or sabotage.

Vote again until you get it right.

DUP
Even the last bastion of the DUP, our strongest supporters of leaving the EU appear on the point of surrender – for a price. Honour is but a feather when compared to a pouch of 30 pieces of silver, it seems. Their support for the Conservatives – welcome as it was and is – was nevertheless bought and secured with a bung of over a billion pounds of taxpayer money. And now – against all convention – it seems they are in talks with Mrs May and Mr Hammond to agree to her WA deal – for a price.

e.g.: DUP ‘to be handed millions’ to back Mayâ€™s Brexit deal as its leaders hold talks with Philip Hammond

Honour: the quality of knowing and doing what is morally right.

By the very definition, if your honour can be bought, you have none!

Lib-Dem
They are pro-remain and campaigned accordingly, winning them a number of seats. HOWEVER, they are also the party that pledged to support students and, as soon as elected in a joint party with the Conservatives, as part of their support agreement, trebled the price of university fees, saddling a whole generation with debt. They can never be trusted again either.

Mrs May’s (the EU’s) Withdrawal Agreement
And again, our pro-EU prime minister. By all accounts the Withdrawal Agreement was written by the EU! It was then amended â€“ in secret â€“ in Whitehall, again in a cloud of secrecy; the 500-odd page legal document was presented to a cabal of Ministers who were ordered to accept it. Unread.

Even at a glance they were apparently mortified. Regardless, this was the deal. Apparently, essentially, they were told if they wanted to keep their ministerial posts, they HAD to accept it. So, like parasites, they voted with their wallet, not their conscience. Technically this was vote #1, overruled.

Thus it was presented to Parliament – who so resoundingly rejected it she pulled the vote on it. It was trashed by every single party. Technically that was vote #2, withdrawn.

In January 2019 it was put forward a third time, the first actual vote. It was the worst loss in the history of Parliament, being rejected by 432 to 202. A loss by 230 votes.

Any other, any honourable prime minister would have resigned at this point. Not this one. Not the result she wanted? Threaten, bribe, lie, cajole, do whatever it takes to get the â€œrightâ€ answer is now the order of the day in Westminster.

So, in February, she presented it for the fourth time, unchanged. Again, in the second actual vote, she lost: 391 MPs vote against her withdrawal agreement, with 242 voting in favour â€” a lesser defeat by 149, but still so high that any honourable prime minister would resign.

Next week, just days before Brexit is supposed to happen. she will present it for the FIFTH time, threatening, MY deal (actually written by the EU, for the EU), or no Brexit. Remain â€“ or remain are your only options.

Vote again, and again, and again until you give the answer we want â€“ or weâ€™ll just ignore you anyway. If you are too stupid to see we are your betters, you donâ€™t deserve a voice!

As even the relentlessly pro-EU biased BBC points out:

There is a rule that the House of Commons should not be asked to vote twice on exactly the same question during a single parliamentary session. However, it will be up to the Speaker to decide whether to allow the vote.

An honourable, neutral, Speaker of the House would NOT have allowed the vote a second time. The ‘honourable‘ Mr Bercow – ardently pro-Remain and infamous for having a sticker reading ‘Bollocks to Brexit’ on his car – will almost certainly allow it a third time. In contravention of all protocol.

Consider your own constituency.
How many of you have a local MP, selected by and put forward by local party members – and how many had a candidate forced on them – parachuted into a ‘safe seat’ by their party HQ – the ‘right’ person with the ‘right’ attitude. How many MPs were in fact not so much democratically voted in but were elected by their own leaders?

The vast majority of MPs now only listen to constituents and voters when they hear what they want. If it doesn’t meet with the approval of the elite Westminster bubble chatter it is ignored.

Politics in the UK is completely broken. MPs are no longer our representatives. THIS NEEDS TO CHANGE!

If doesn’t matter how you voted in the referendum, it doesn’t matter which lies you swallowed during and since the referendum – or which truths to conveniently chose to ignore or poo-poo, what matters is what is right NOW – and what will be the right thing to do NEXT TIME.

Make absolutely no mistake, if you ignore the democracy of the referendum now – because it suits you – it WILL come back to bite you on the arse!

I am reminded of a short story I once wrote, probably based on the parable of the Good Samaritan, and the rise of Hitler’s Nazi party and SS. I’ll rewrite it here anew.

In the land of Alphabet the ruling council decreed that A’s were superfluous. They didn’t think the same as the other letters, they needed to be brought in line with the ‘right’ thinking. So, by one’s and two’s, they were dragged from their homes, never to be heard from again.

At first no-one said anything. Keep your head down, that’s best. Eventually, curtains stopped twitching when the A’s cried out for help in the night.

The self-elected council, now largely unopposed by the troublesome A’s, later decreed that E’s were also not like the rest of them and should be removed, for the greater good of Lphbet.

The E’s, who until now had kept fairly quiet on the subject, began to campaign for their freedom, they put up posters and held rallies.
Few cared, fewer listened when they cried out, “Who mongst you will support us?”
“Cnt you s whts hppening here?”, they begged.

Like the A’s before them, the curtains twitched less and less, lights went out when the screams cried out in the night.

The more vowels were silenced, the more power the ruling Consonants held so, one by one, letter by letter, the vowels disappeared, until, finally, it was U’s turn. U who throughout was silent. U, that was even supportive of the edicts. Now though, when few are left to help U, now U personally are the target…

Like the E, I, and O before them, who had also either largely kept quiet or even loudly endorsed the actions – until it affected them personally – they too began to campaign for their freedom, they put up posters and held rallies:
No-one listened when they cried “Wh mngst yu wll supprt us?”
“Cnt yu s whts hppnng hr?”, they begged.

In the end, no-one was left to ask Y, because Y was silenced too.

Remember all of this, when the next local elections and general elections come around, because whoever you vote for, whatever party, if they only listen to their own council, to the echo chamber of the Westminster bubble, then you can bet – like the land of Alphabet, now Lphbt – that your voice will only be heard if suits them.

As the Irish philosopher and politician Edmund Burke said in the 18th century,: The only thing necessary for the triumph of evil is for good men to do nothing.