Observations of an ardent remainer

I saw a wall of drivel posted on New Scientist comments and I decided to take a look at the poster.

It may come as no surprise that the poster, Sumi Olsen facebook: /sumi.olson), has no background, no friends, very few followers, and claims Brexiteers are, quote: responsible for everything bad that happens to the UK.

They offer as their intro:
“Citizen of the world, human. Against right wing populism, brexit, animal abuse, inequality & racists.”

Looking at their page shares, it’s ‘interesting’ if nothing else. They are reasonably well spoken, possibly degree educated, and appear to work for the NHS. Amongst all the anti-brexit posts, they clearly care for animals, and people with disabilities, but also share an article promoting Sainbury’s offer of vibrators for Â£8, which is followed one (link removed) saying “Don’t patronise women. Don’t patronise women ‘of a certain age’ and Women, for heaven’s sake, what ever you do, don’t put up with crap.”

Anyway, let’s look at the four ‘fact’ gifs they shared with New Scientist. 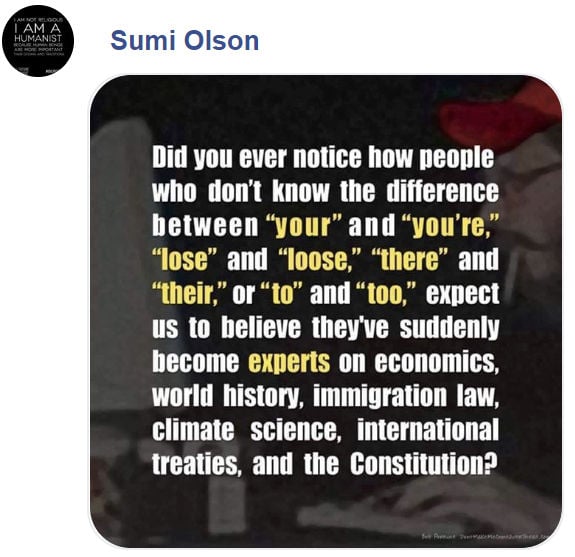 The first is generalised and makes a sarcastic comment about poor grammar and ‘experts’. I didn’t bother replying but its (sic) worth noting that even the smartest people – regardless of the number of degrees or Ph.Ds they have – can make trivial spelling and grammatical errors when trotting out emails and social media comments. I to have made such errors! 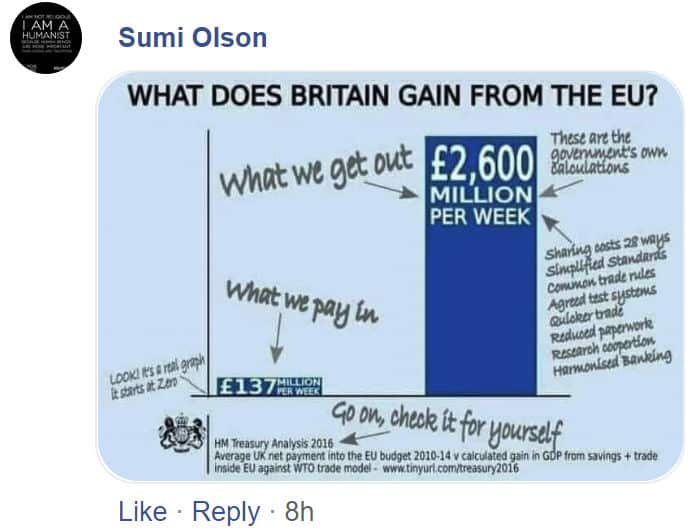 The second, which I’ve seen a few times before and always annoys me, edits a dubious chart ‘proving’ the EU very generously donates billions of pounds a week to us. To which I replied:

Either you are being sarcastic, you are blindly gullible, or you are trolling. In all three scenarios you, and your fake graph, are being idiotic.

No link from you, I see, no citation, just a made up chart, heavily annotated.

The entire annual budget, with donations from 28 countries – according to the EU themselves [ europarl.europa.eu/news/en/headlines/priorities/2014-2020-budget ] – is â‚¬135.5 billion a year. Yet you claim the EU pay us over â‚¬150 billion a year.

It is also worth noting that the graph does not appear anywhere in the treasury report it alludes too, the tinyurl being for: ‘HM Treasury analysis: the long-term economic impact of EU membership and the alternatives’ [ assets.publishing.service.gov.uk/government/uploads/system/uploads/attachment_data/file/517415/treasury_analysis_economic_impact_of_eu_membership_web.pdf ]

We control our own laws 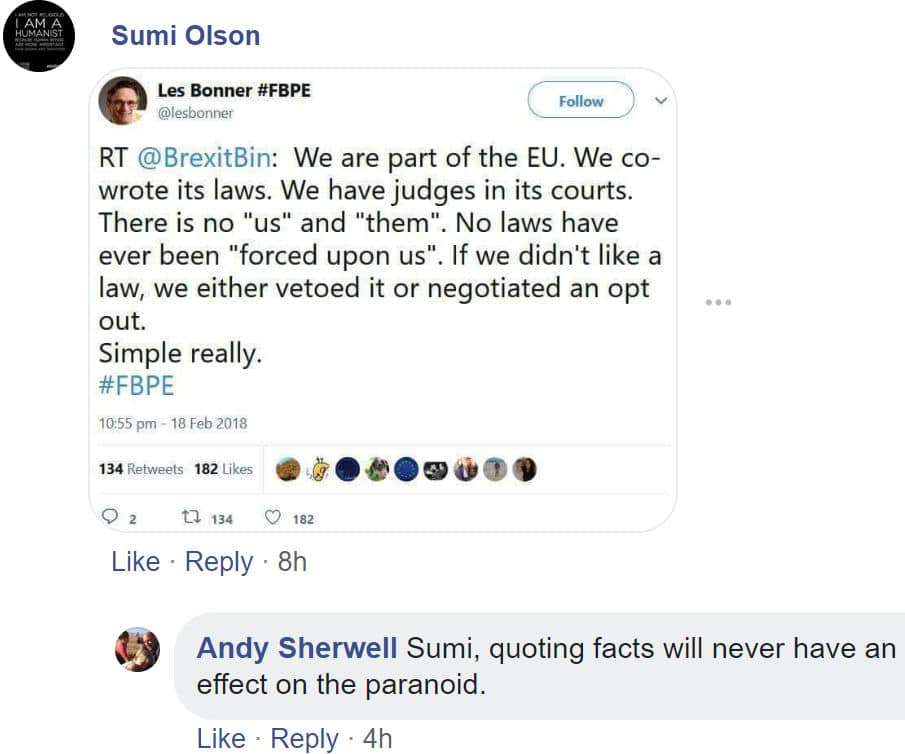 Next he shares a tweet ‘proving’ we can pick out our EU laws, and gains immediate support from another remainer who suggests Leavers are paranoid and not interested in facts.

Ah, I see, so Les Bonner (twitter.com/lesbonner), a nobody (whose account was in any case suspended by Twitter) is considered an authority?

We are indeed part of the EU, however:

we most certainly did not co-write any EU laws,

we have no judges in the ECJ, no say in who those judges are, and indeed not all the judges they have are qualified lawyers or QCs,

there is an us and them, us being the rest of Europe and them being the bureaucrats running the EU.

And we absolutely DO have to follow EU law. To suggest we can veto, opt-out or ‘cherry pick’ the EU laws we want is comical in its absurdity.

Finally is an Impact Assessment of Brexit 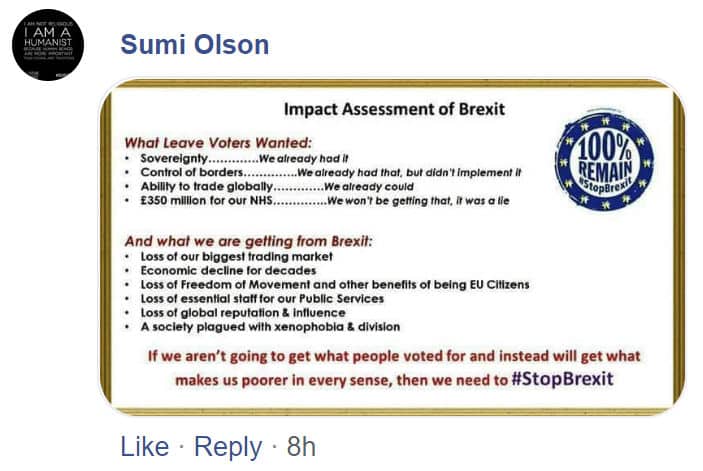 So, I counter offer an ‘Impact Assessment of above claims’:

There’s actually a large number of answers here, including control of our borders, the Â£10 billion a year we pay them, immigration, sovereignty, and other factors. Personally, added to that list, I want to see the EU collapse, and I doubt I’ll have long to wait. I sincerely hope we escape and accelerate its demise.

So, sovereignty. I think we can FIRMLY nails that coffin lid down seeing as various EU officials and heads of state – like Merkel – are openly demanding we – all EU countries – surrender their sovereignty to Brussels. For instance – and there are many more in the same vein:

“Today, nation states should, I would say must â€“ be prepared to give up their sovereignty,” Merkel said, speaking an event organized by the Konrad Adenauer Foundation in Berlin on Wednesday devoted to the topic of ‘Parliamentarism Between Globalism and National Sovereignty’.

e.g.: In the words of Guy Verhofstadt:

i.e. FACT, not made up chart to suit remain agenda.

Control of our borders.
No we don’t have control over them, as far as the EU is concerned.

“The free movement of persons is a fundamental right guaranteed by the EU to its citizens. It entitles every EU citizen to travel, work and live in any EU country without special formalities.”

e.g. ec.europa.eu/home-affairs/what-we-do/policies/borders-and-visas/schengen_en
i.e. FACT, not made up chart to suit remain agenda.

That said, I concur that Theresa May and the home Office have made a complete pigs ear of immigration, especially with regards to citizen from commonwealth countries, plus – without asking – she signed us up to the Marrekesh accord on global mass migration.

Ability to trade globally.
NO, we can’t, we CANNOT negotiate trade agreements with other countries while bound to the custom’s union.

The Customs Union is an important element of the EU Single Market. Under its rules, the EU operates as a trade bloc, operating common external tariffs and customs barriers, and negotiating trade deals as one. As a member of the Customs Union, the UK is not allowed to negotiate other bilateral trade deals

e.g. instituteforgovernment.org.uk/blog/leaving-eu-customs-union-what-involved
i.e. FACT, not made up chart to suit remain agenda.

And what we are getting from Brexit:

The value of the trade deficit was about Â£60 billion in the 12 months to September 2016. The UK imported Â£302 billion worth of goods and services from the EU, and exported Â£242 billion worth, according to the Office for National Statistics. (Figures from the EU statistics agency are different but still show a deficit.)

e.g. gov.uk/settled-status-eu-citizens-families
i.e. FACT, not made up chart to suit remain agenda.

Loss of global reputation and influence.
Because of Leaving? Hah! Not even wasting a minute here either. You are joking, right?

A society plagued by xenophobia & division?
Plagued? Really?
But yes, let’s just pull out the ‘racist’ card.
It’s not even worth arguing with remainers that are blind to facts, but let’s try, shall we.
xenophobia /zÉ›nÉ™ËˆfÉ™ÊŠbÉªÉ™/ noun
dislike of or prejudice against people from other countries.

It’s like the Monty Python Life of Bryan sketch:
“What did the Roman’s ever do for us?”
â€¦
“OK, OK apart from the aqueducts, the sanitation, the roads, irrigation, wine, public baths, medicine, education, public healthâ€¦ what have the Romans ever done for us?”
“Brought peace?”
“Oh shut up!”

The Leave argument is for slowing and ideally reversing unregulated mass immigration (i.e NUMBERS), not of race, colour or creed. Which isn’t to say they some people aren’t racists or bigots, but let’s be serious here – you could point out the Scottish dislike of the English as xenophobia, or indeed the general north/south divide in the UK, or even on a more local level, “We don’t want those Scousers/Manchunians/Bostonians coming to our town, taking our houses, our jobs.”

If you are biased, you are often blind to your own ignorance. That’s not xenophobia, it’s either protectionism or stupidity.

Funny how all the claims that this is ‘fake news’ suddenly, quietly, got removed from the remainers arsenals, eh ;)

Consider this drunken sounding and irrational tirade by ‘arch-remainer’ Anna Soubry. In a slurried rant, television from the House of Commons, she argues that of those eligible to vote, only 37% voted to leave the European Union, and that means 63% of the people in this country, the will of the people, was actually for us not to leave the EU.

< It was the biggest democratic vote in the history of the country - and her argument is that the people that stayed at home were - every last one of them - remainers and that if only they had voted we'd have stayed in the EU and that's how it should be. Besides the complete absurdity, we could apply the same twisted logic to the 2017 General Election. In truth - in FACT - her majority was 863, or 1.6%, but 25% of those eligible to vote, didn't. By her logic, the 25% non votes would have been hers, and given her a margin of 26.6% - if only people had voted, and had voted the right way. That's not just wishful thinking, it is delusional. Equally, staying with the 2017 general election, the turnout was 68.7% (compared to the referendum at 72.2%) and Conservative just about won with 42.4% of votes. Not enough to form a government without the help of the DUP. Yet - by her (drunken?) reasoning - 31.3% of eligible voters stayed at home and if only they'd gone to the polls, if only they had voted, her party would have won by a landslide 73.7%. Not one of those millions of people would have voted for SNP or Labour, or Plaid Cymru, they'd only have voted the way she hoped. To realise - in a such a shameful and embarrassing way - that some of our MPs, our leaders, the self-styled elite, whose who - they tell us - know best, are so irrationally obsessed, so blinded biased as to be nearly incoherent is troubling!