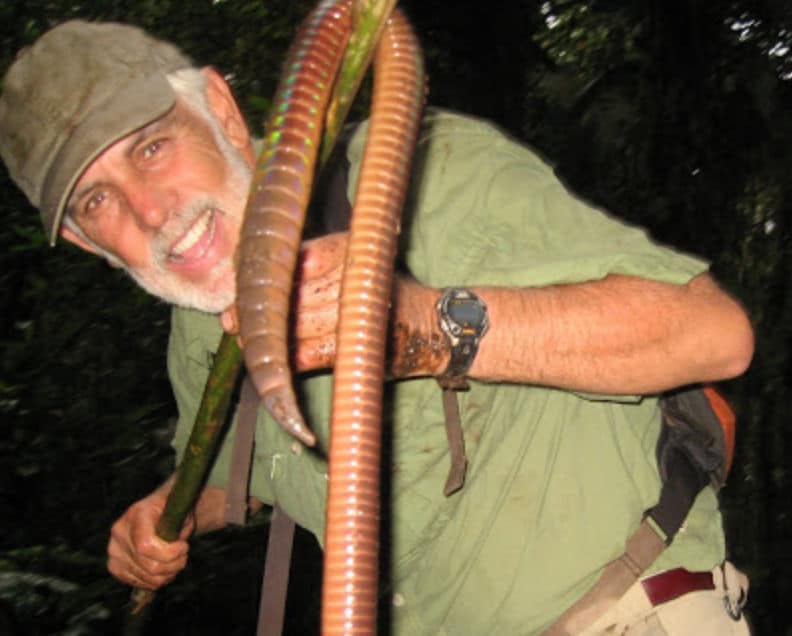 I read about giant earthworms decades ago, so nothing new to me, and this/these particular images have been floating around for several years, usually decried as a fake, Photoshop’ed, obviously. The image below caught my attention all the same, appearing on Facebook pegged as We don’t need Dune in 2020 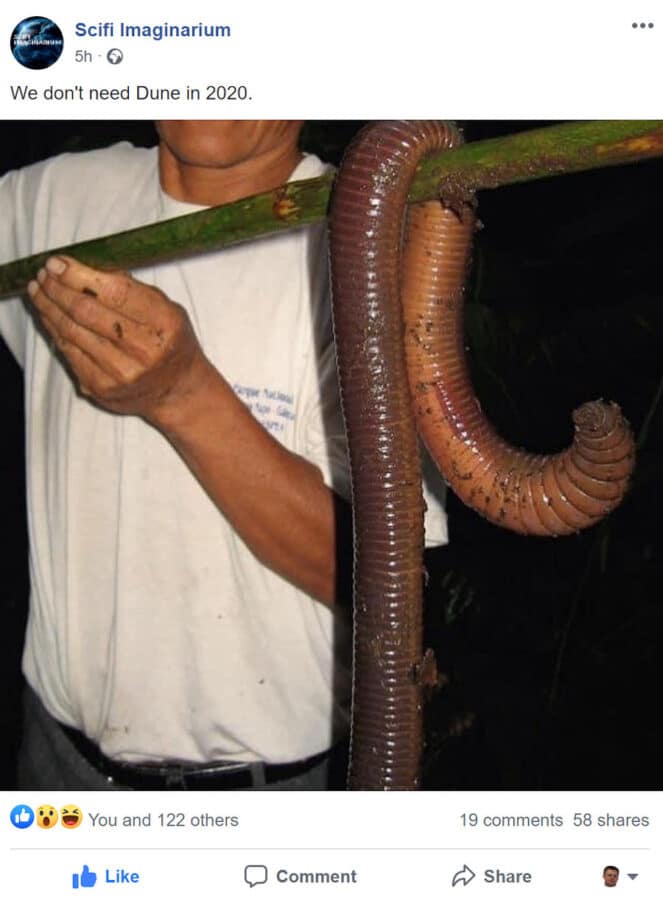 Yet another such worm is shown on ‘Waffle at Noon’, under Hoaxes and Rumours: Photo of Giant Earthworm: Real or Fake

Actually, it is real.

What’s interesting about this particular monster earthworm is proving it’s authenticity. Some sources say it’s South American, (Ecuador or Peru), some Australian, one said it was in the outer Hebrides of all places, claiming “Giant Worms The Size Of SNAKES Are Discovered By Scientists On Abandoned Scottish Island [VIDEO]“. All for the same image.

“This is a Salvadoran Worm and can grow to lengths exceeding 4ft. They thrive in jungle climates, and usually sustain their size by consuming 1-2 pounds of underground mushrooms per day. Some villages consider it a delicacy when stuffed and grilled with their favorite fruits. Traditional witch doctors have been observed drying the worm’s organs, then grinding them into a paste to help alleviate toothaches. Also none of this is true.”

OK, perhaps Reddit wasn’t the best place to begin. But giant earthworms are real, and generally a protected species, such as the Gippsland Earthworm (Megascolides australis), so perhaps maybe a bit of camera trickery to exaggerate the girth?

If you want more scholarly link on the monster worm pictured above, these South American beasties have been known about for a long time and predate social media by a good hundred years, so yes, they are real. For instance:

So, not clickbait, but what about the photo of me in the garden with the monster worm? Fake?

Well, again, no. While it’s obviously not me, it is real. The gentleman in the feature image goes by the handle of Hoppy4840 and sent the photographs to the Noah Project, asking for identification. He later commented that “The U of Iowa and Universidad Catolica (Quito) are collaborating on a study of these giant Sumaco earthworms.”

The story was widely reported at the time, such as Digital Journal, under ‘odd news’: Giant 5-foot earthworm captured in Ecuador

Another worm was later pictured in iNaturalist. This particular earthworm grows to around 1.5m (5 foot), while the aussie Gippsland can be twice that length.

More disturbing is this: “Monster leech swallows giant worm – Wonders of the Monsoon: Episode 4 – BBC Two” (see video below).
The episode also appeared in The Telegraph and is the stuff of nightmares! Giant flesh-eating leech filmed swallowing huge earthworm like spaghetti

Not recommended, but included for the “What!?” factor: World’s biggest Gummy Worm