I’ll expand this when I have more time, but it serves as a starting point.

I really should get round to writing an article on denialism, notably including global warning. For the moment though, the main focus of this post is on the plastic aspect of it all.

In parts of the world’s oceans are vast countries-wide accumulations of plastic – but it’s not ‘our‘ fault.

In the rivers and lakes, fish and other wildlife forms such as crayfish and mussels are either gender-changing or being sterilised due to pollution from human waste and farm run-offs. But it’s not our fault. What can we do about it?

Those Omega tablets you might buy have to be processed and purified to remove the mercury and other toxics now an integral (and toxic) part of the food chains – but that too is not our fault.

From the uppermost atmosphere to the deepest, darkest trenches of the seas and oceans, they gather. Even the most ‘pristine’ snows of the artics are contaminated.

Whether as bags and bottles or micro-particles, the world is being coated in a growing layer of plastic!

So much so that it now registers on a geological scale, the sort of change that normally takes millions of years, or world-shaking / an extinction level event – yet we have managed it with discarded household and industrial waste in under a century. Known also as ‘plastiglomerates’, even several years back the Geological Society of America warned of the impact, calling it An anthropogenic marker horizon in the future rock record. But it’s not our fault.

In the last hundred years, the world population has risen from 1.8 billion to 7.8 billion (and growing). Yet multinationals want us to breed faster (better for profits), while childless couples receive fertility treatment. Meanwhile, rogue scientists are genetically engineering babies, for a ‘better’ future. But it’s not our fault.

With every passing decade, we need more and more and more power stations, sucking up ever more of limited and dwindling resources, while pumping out heat and gases. But it’s not our fault.

Virus after virus, epidemics and pandemics spawn from overcrowded cities, battery farms, and filth-riddled markets, but it’s not our fault.

No, of course it is not our fault…, the stuff illustrated below – umbrella, plastic carrier bag, plastic pop bottle, discarded can of Red Bull(?), etc. – grew there naturally, right?

(The image below was taken less than a yard from a commonly used path in the ‘school runs’. Teenagers likely dumped it on the way to/from school, or perhaps parents, taking toddlers to the nursery). 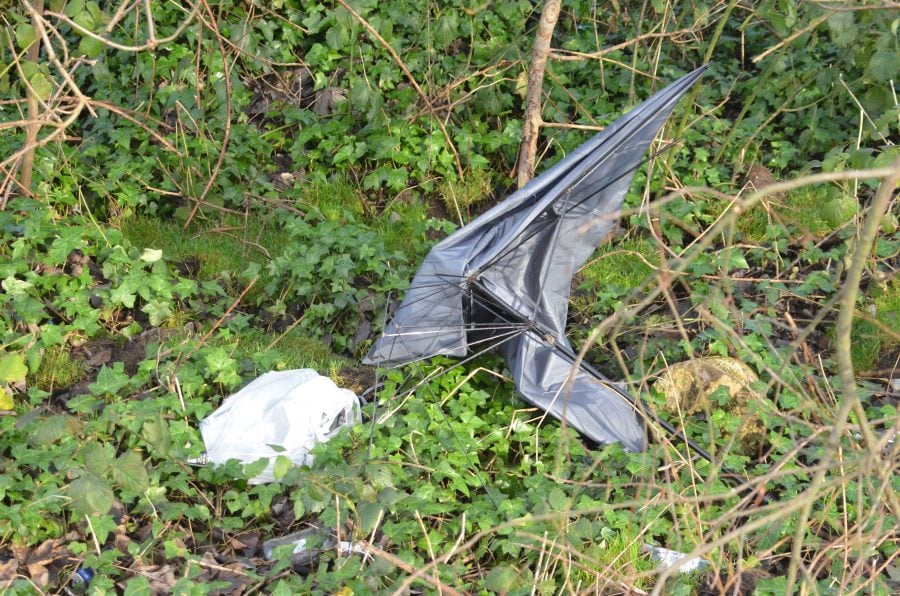 We are all responsible. Denying the truth will not make the horrors go away. What are you going to do about it?