Allowing for heavy rounding-up, I was playing with the maths of Covid-19 in the UK.

But, according to global figures (allowing some show a slowdown), the numbers are doubling every six to seven days (every 4 in the UK), and for every recorded case there are two unrecorded. Using that base, if it continues at the current rate, (ignoring diminishing returns of the vector, of course), it will look like this:

By July – IF IT KEPT THE SAME RATE – pretty much everyone in the UK would have caught it. 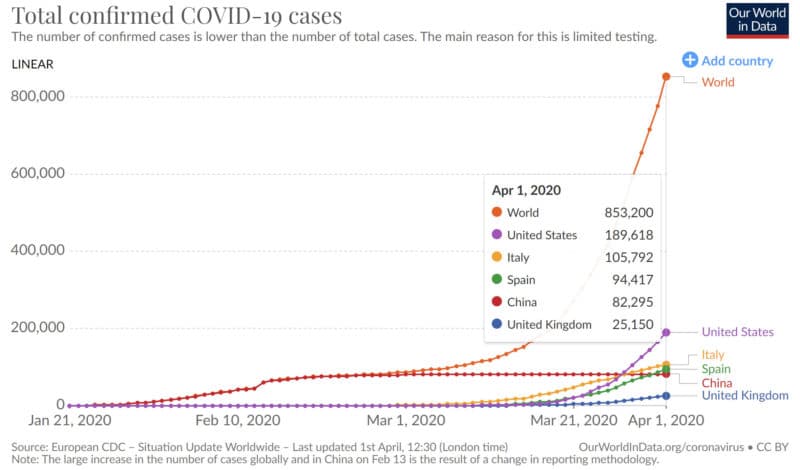 It is interesting to note that in all countries, bar China where in began, the virus has exhibited exponential growth, noting this growth varies between two and six days, though countries being more determined in curbing the spread (e.g. South Korea, Japan) are seeing much shallower, more manageable increases in the number of cases.

In contrast, China is – it appears – seeing an end to it. Either China knows something the rest of the world doesn’t, or it is lying about the number of cases. 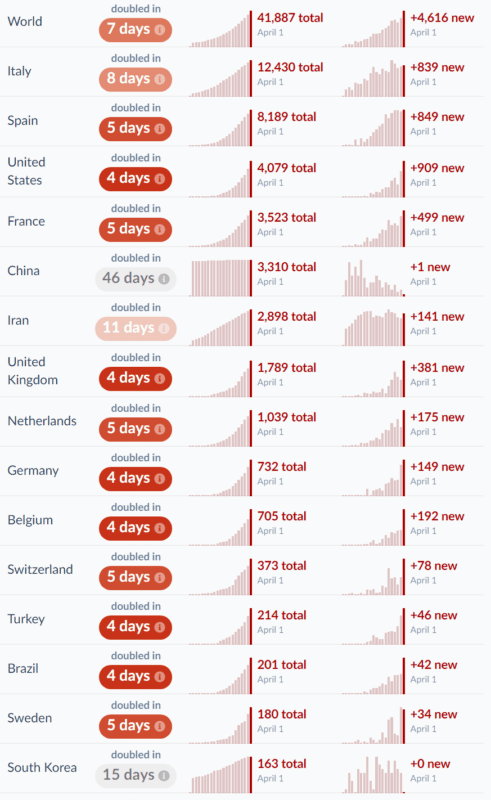 Below is what exponential growth looks like. For a 6-day cycle, we in the UK would be about 2 months (60 days) from complete infection, if the rate remained constant. At the present 4-day cycle, it would be a few weeks sooner! 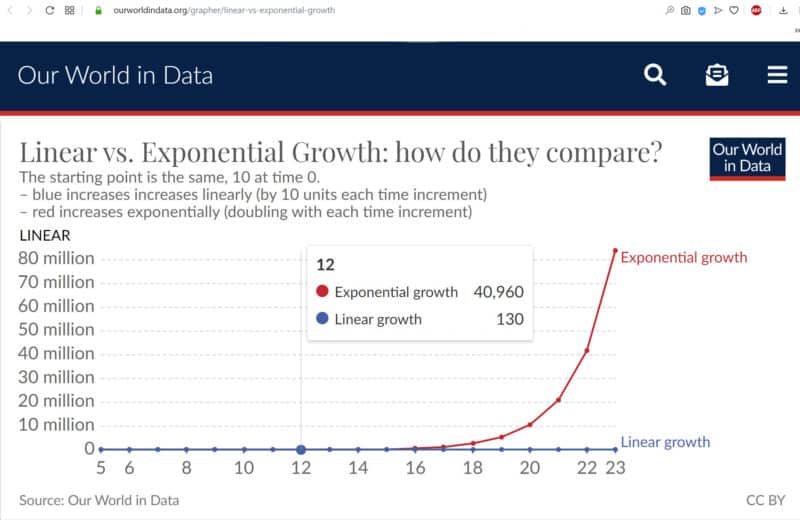 So, there’s the bright side, (unless it mutates to a new strain), the threat of catching it will be over mid-June (‘cos you’ll already have it!), with the epidemic over mid-July.

Coronavirus will infect half the global population, EIU predicts

“We assume that the virus will infect around 50% of the world population; 20% of the cases will be severe, and 1-3% will result in deaths,” analysts from the Economist Intelligence Unit (EIU) said in a note.

Unfortunately, being the cheerful begger I am, maths also suggests that the doubling, at the same continued rate, /could/ cause a new*, possibly deadlier strain around early to mid-June, at which point all bets are off.

*Luckily, scientifically speaking, there’s no chance of that happening.
However, the same scientists tell us that Covid-19 is mutating every 15 days, on average.
But it can’t create a new virus unless someone with another, compatible virus, get it.
HUZZAH!
Unfortunately, SARS, MER-CoV and this Covid-19, and ebola, and all the other nasties out their occurred because the “no chance of that happening” happened.

Conversely, as one recent article in Scientific American commented, “Scientists have long warned that the rate of emergence of new infectious diseases is accelerating—especially in developing countries where high densities of people and animals increasingly mingle and move about.”

And the point of all this?

Just an observation. Politically speaking, conspiracy theory-wise, there isn’t the fear of the virus as much as the fear of making the wrong choice and politicians and decision-makers themselves being affected. (e.g. by voters)

Added to that, this virus ain’t too fussy and is happily stomping round the Kremlin, the royal houses, Downing Street; well, these came beggers will be fearing for themselves. Never mind the great unwashed, the privileged few are affected!

As the Chinese* curse threatens, we may live in interesting times.

*(Wikipedia notes that it’s not a Chinese curse at all but was first recorded in a speech by a British politician, Joseph Chamberlain, in 1898: ”

“I think that you will all agree that we are living in most interesting times. (…) I never remember myself a time in which our history was so full, in which day by day brought us new objects of interest, and, let me say also, new objects for anxiety.”

One last thought, just to wind you up:

Covid-19 (the disease) is NOT caused by a genetically modified pathogen (i.e. the virus, SARS-CoV-2). So, we can forget all /those/ conspiracy theories. (See Nature)

However, as related in Scientific American, March 2020, the researchers at Wuhan were actively seeking and testing very similar, naturally occurring strains. So alike, in fact, that the Chinese authorities sent their best virologists to make sure the outbreak detected in December was not one of theirs.

Whether it is was for fear of the consequences (from their superiors), or fear of the pathogen, the article notes they were ‘sick with worry’ that it was one of their lab coronaviruses that had got out.

Shi instructed her team to repeat the tests and, at the same time, sent the samples to another laboratory to sequence the full viral genomes. Meanwhile she frantically went through her own laboratory’s records from the past few years to check for any mishandling of experimental materials, especially during disposal. Shi breathed a sigh of relief when the results came back: none of the sequences matched those of the viruses her team had sampled from bat caves. “That really took a load off my mind,” she says. “I had not slept a wink for days.”

Hence the clampdown. Only after they had ruled out it escaping from their own bio-research labs were Chinese authorities more open about the outbreak.

Interesting – perhaps – the Scientific American article, quoting the virologist, says that “The mysterious patient samples arrived at Wuhan Institute of Virology at 7 P.M. on December 30, 2019”, whereas her team’s paper, published in Nature (03 Feb 2020), says that the epidemic “started on 12 December 2019”. Other sources put the date at the 1st of December. (In all cases, primary infection would have occurred anywhere between 5 and 27 days earlier, pushing the true (undetected) start back to Nov 2019). Of course the differences could be related to whom it was reported, or more precisely, when it was decided it was something new.

Again, none of these puzzle pieces infer a conspiracy, but they do suggest a certain amount of cautious on the part of China, with the impression of perceived possible culpability. Followed by a release of breath that nothing of theirs had got out. Which, equally, infers there is something of theirs that would really scare them if it got out.

Thus, there is no conspiracy, no cover up, but, it seems, there are secrets.

Funnily enough, after I published this post, I came across one in a similar vein on Yahoo news: The Trail Leading Back to the Wuhan Labs (National Review by Jim Geraghty, April 3rd, 2020). Their opinion is the same, but takes on more of a conspiracy theory, having access to translations from Chinese sites.

Some just read like a perfectly normal coincidence of timing, others are more, “Yes, well, about that…”. For instance:

“The Wuhan Institute of Virology in China indeed posted a job opening on November 18, 2019, “asking for scientists to come research the relationship between the coronavirus and bats.”

Taking bats as the research object, I will answer the molecular mechanism that can coexist with Ebola and SARS- associated coronavirus for a long time without disease, and its relationship with flight and longevity.

Again, I feel, it doesn’t support a conspiracy theory for Covid-19, but the date matches when the first cases would have occurred. which – if I was suspicious and paranoid (which actually I am) – would lead me to believe that immediately prior to that date (e.g. early November), an infected specimen escaped, setting off all sorts of alarms.

My personal view is they found an ‘interesting’ strain of (naturally occurring) virus and, fully intending to weaponize it, got to work growing cultures.

And it got out!

This doesn’t imply is was modified, but it would explain a lot, and move the pointer from ‘innocent of all charges’ to one of culpability, e.g. if they weren’t making cultures of it to study, we wouldn’t have this pandemic. Whether that possible virus met another to form the Novel Coronavirus is also a matter of conjecture. In all cases it is reasonable to assume that both the Wuhan research facility and the Chinese government know more than they admit.