As I enter day two of “weeep, weeep, weeep” in the background, I’ll mention one of my personal hates: burglar alarms. While they do have their place, they should have a cut off after an hour or so – at most. After a while of the alarm going off you get the urge to go round to the house with a pair of ladders and some wire cutters. After two or three days of no-one coming to check or turn it off, if you aren’t being burgled already, you might as well put an advert in the local paper saying, “We are away for a while, take all our stuff.” At least around here.

Did a little googling and the police station (serving about 175,000 people) is less than 300m away, about 0.2 of a mile. The world record for a 300m sprint is under 31 seconds. When we were robbed – while we slept – the investigating officer said a quarter of the houses around here have been hit in the past year or so! There’s well over 400 houses just in our block of streets, do the maths!

It’s a fairly quiet neighbourhood – albeit with several drug dealers, a large rehab house full of junkies and the odd event involving shot guns, machetes, hammers and samurai swords. Only the other month a house across from us was raided, turns out as well as dealing class ‘A’, the bedrooms were turned into a cannabis farm. The rougher areas of town, the places with a bad reputation, must be fun, eh.

As the dusting / fingerprint officer left she cheerily informed us, “Here’s your crime number, but don’t expect your stuff back though, we won’t catch them, we never do.” Same the world over I guess. 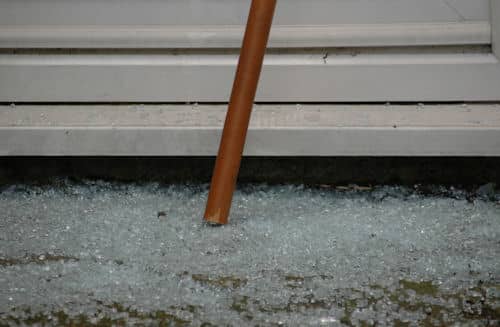 Meanwhile, the whoop whoop of the alarms – and the apparent complete lack of interest from the police station practically opposite – is informing all the local scallies that no-one is home ‘here‘. Of course the next door neighbour will hear the thieves breaking the back window to get in and call the police immediately. Ah, except they won’t hear anything because of the constant noise pollution from the screaming 120dB device ‘protecting’ the house. 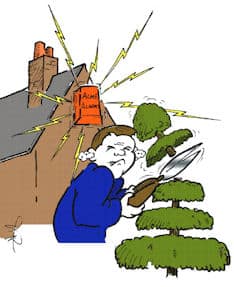 I dare say most councils have their own pages on this, but I ‘borrowed’ this cartoon (left) from Staffordshire County Council.

(I used to have a link to the page on ‘Audible intruder alarms and noise pollution’, but it’s dead now.)

Below is an interesting extract from the above link. Under new laws it becomes a nuisance after just 20 minutes and they have the right to enter your house, cut it off – and bill you for it.

New laws mean that we have the power to take action when:

The alarm has been sounding continuously for more than 20 minutes or intermittently for more than an hour
The noise is likely to give people living or working nearby reasonable cause for annoyance;

We have the power to enter premises to disable the alarm. In most cases we will only need to disconnect the wiring to the external alarm box. If we need to physically enter the building, we need to obtain a warrant.

In most cases we will recover the costs of disabling the alarm from the occupier.

Funnily enough, it stopped just as I finished this post. Still, we got an article out of the racket.

(Feature image of the thief by TheDigitalWay from Pixabay)