Personally, I think Blizzard need to think long and hard over this ‘We are Legendary’ because it’s a whole nest of Vipers.

For a start, there appear to be dithering over whether or not it will be retro-active.

There’s a few ways this can go – and all end ugly.

1) Ninja’ing of legendaries and legendary components will go through the roof. And given Blizzard complete ‘hand-off **** happen, get over it’ approach to it, the tirades in /trade will be more legendary that the achievement

2) As has been mentioned, and a chief concern of mine, the people with Legendary’s will whore themselves to the highest bidder. Then, being that type of person, guild hop anyway, taking their signing fee with them.

So the only people who win here are Blizzard raking in the fees and the leeches.

Recently I was in a 5 man to MC and won the right hand for Thunderfury – it was a fair roll and I wasn’t RL or lootmaster – but three of them turned on me anyway. And that’s before you even get to Cata…

So, retro-active (giving in to the big guilds) is IMO a really, REALLY bad idea.

So, going with only counting after Cata…

Well, Blizzard just shoot themselves in the foot anyway, for several reasons.

First off, Yay, new expansion… people want to explore the new stuff, grind levels on alts etc. They do NOT want to be endlessly doing Ulduar, Sunwell etc in the hope that a legendary /might/ drop this week.

The majority of regular players cannot commit to ‘raid guilds’ because of the time commitment and you know – having a real life.

The majority of ‘raid players’ conversely tend towards being obsessively dedicated to conquering new content and getting new epics (GS shows you have skills, anyone… cough)

Can you imagine the raid rota :

ALL of that to get one guild raid achievement – and we all know how low the drop rates on the legendaries are =D – so you are committing people to months or years of raiding old content they are already sick of.

Another point is the move towards being equal with 10 / 25 man guilds. (ie in Cata 25 = more drops, not better ones). Again, the above mindless grind favours big guilds, regardless of how powerful you get in level 85 epics.

Anyway, a year down the line, you finally get the achievement. Numero uno. You are the dogs B.

One of three things happens:

1) The Guildleader is a pillock, gets hacked and hacker destroys your guild (it happens, you know it!)

3) The GL gets a RL big cash offer, (possibly booting the lot of you) and then it really hits the fan ‘cos you lot have worked your tail off for a year to put cash in his/her bank

However you look at this, my feeling is this ‘We are legendary’ should be a (non retro-active) Realm First feat of Strength achievement applied to the player and guild, but NOT part of the guild levelling process.

Pre-release there was a lot of concern in forums over how they would approach this. In the end, unusually for Blizzard, the way they did it was perfectly fine. I even went on to get every legendary across my alts for our guild (Remnants of Chaos), which is a bit sad if you think about it, but that’s the game. 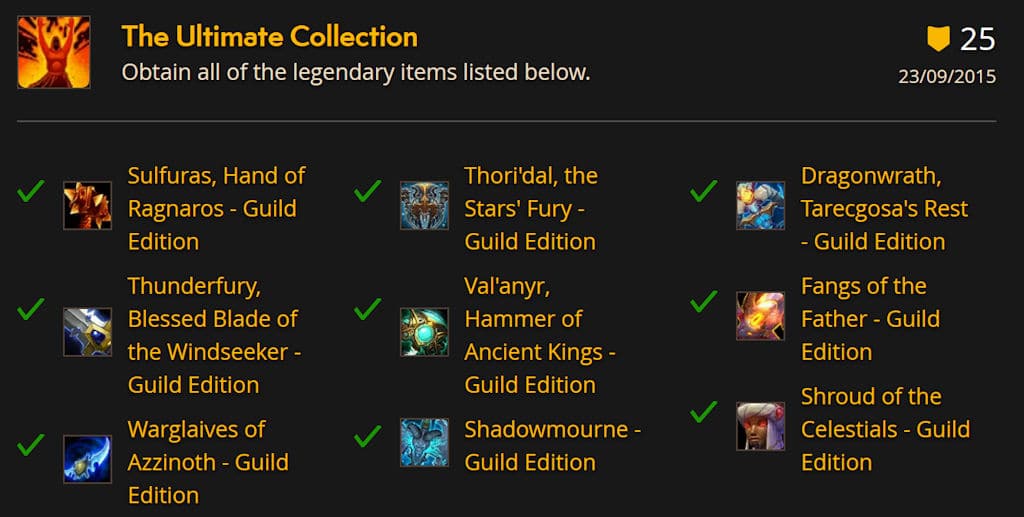 1 thought on “We are Legendary”