This short article is just to gee up my guild (Remnants of Chaos on Aerie Peak) to finish the Pandaren pool fishing achievement, but putting a carrot on the stick as bait, so to speak. It does apply in general, though, so you might want to read on.

In specific terms of the guild, we need about 15,000 more fish! Sounds a lot like that, and for one person it is – that’s about 100 hours, roughly enough to grind several characters to 700 in fishing!

Looking at it another way, all it needs is 15 players to level up one character in the profession. If all our guild members helped we could do it in under an hour, In fact, collectively, we could get it just by fishing nearby as we wait out the 15-minute reset on Galleon while farming the Son of Galleon mount

You can also catch Tiny Carp pets in Pandaren pools. The type/colour varies with zone, as does their value (mediated by rarity and flipping price, cross-server). If you were to buy/sell these, they are worth roughly 5,000g to 25,000g each.

Farming these:
Obviously, it’s a long haul fight with RNG against you, but if you want to level up fishing anyway, you might as well do it here as anywhere.

The Tiny Green Carp is fished from pools in the Valley of Four Winds (0.02%), and also the Jade Forest (0.01%) and Townlong Steppes (0.01%). Perhaps the best place is along the river in the Valley, where Galleon spawns, as does another rare with a toy.

Finally, the Tiny Red Carp can only landed in one or two places in Townlong Steppes (0.04%) but it you take the pools behind Niuzao Temple there’s four or five constantly forming so it’s a good spot.

As a final note, you will also want to get your fishing up ready for the artifact fishing rod which, amongst its upgrade path, offers the ability to fish up Blood of Sargeros. This latter rare drop will be lucrative in itself as it is needed for around 158 recipes and will be in very high demand for some time.

WoW 3.02 strangles game This has to one of the buggiest patches ever. A lot of the complaints I saw were people […]

WoW 3.02: Bugged to heck! Day one was horrendous, barely usable, but they turned that round in a day, albeit till a […] 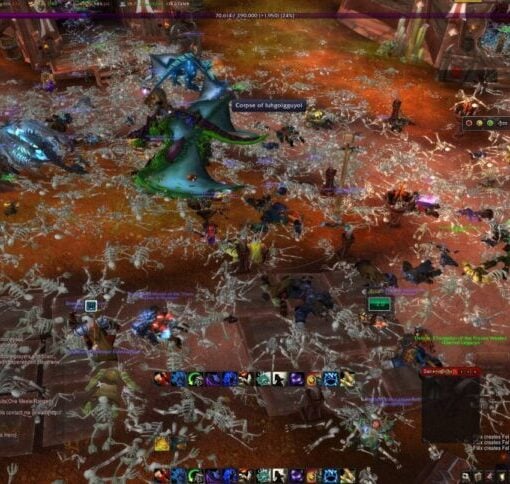