« Rules for the Horseplay board game »

Horseplay is a word game of cunning and strategy, designed for one to four players of all age groups. The aim is simple – to form the longest, highest scoring word possible with accrued letters, whilst at the same time hampering the progress of your fellow players.

Setting up the board

The board is a patchwork of green and blue coloured squares, some of which are ‘STABLES’, some ‘PADDOCKS’ and, on the larger board, some are ‘MISS A TURN’ (hazard) squares. The HORSES are placed in the Paddock of the corresponding colour, then letter tiles are placed face down at random on the rest of the blue squares, and the five ‘Stable’ squares – then turned over to reveal the letters before the start of play. 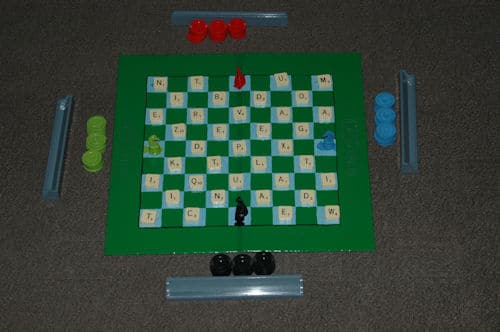 First choose your colour, then pick up one of the remaining letter tiles. The player with the letter nearest to the beginning of the alphabet will move first, play continuing in a clockwise motion. Each player also gets 10 round counters in his own colour (15 on the larger board). These are the stepping stones of the game and once these are used up you must remain where you are – you are out on the game unless you can reach your Stable on the next move.

The Horse, as with the knight in chess, moves in an L-shape, in any direction, e.g. two squares vertically and one square horizontally, or vice versa. Your Horse has two jumps per turn; the first onto a green square, expending one counter in the process, then onto a blue square to collect a letter tile.

An example of moving the Horse piece is given below. 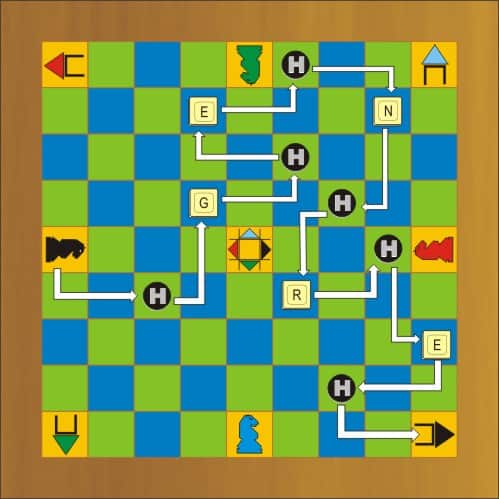 As you can see above, your Horse jumps about the board, first using up a counter, thus blocking off the square, then leaping to a letter. In this example the character collected G, E, N, R, E to spell ‘green’, or as it happens, ‘genre’ !

Scoring is as follows: each letter used in a word rates 10 points, plus the face value (shown in the right hand corner of the tile). The person with the highest score is the winner.

As it is a relatively short, fast game, you may like to play continuously, with consecutive play the colours – players – take turns at moving first and the score at the end of each game is added to the total of the last. Here the aim would be to reach a set score for the overall winner.

This can be played on either side of the board and the aim is to allow each Horse to make the best possible word – whilst finishing in a Stable of the same colour.

This is the standard rules, described earlier.

The Horses can team together in a bid to widen the scope avaiable. It may be likened to bridge were players sitting opposite each other work together for mutual advantage. Here is it the red and black verses the blue and green. When the last Horse is stabled the letters are pooled together to form the best score possible. However, any player who is trapped or blocked from entering the Stables will forfeit their letters.

Any of the following can be added together or taken separately to make the game more interesting, and harder.