Thrice cursed upgrade this year, I tell ya’

On top of the thousands I spent upgrading my computer this year I got two more slaps in the face, one, well two from Gigabyte and one from Antec, adding yet another £125 to the cost.

For a start, after waiting weeks for Dabs or anyone really to have stocks of the dual gpu Nvidia 295 I really wanted (at none extortionate prices)* I settled for Gigabyte’s Nvidia 285.  (I’ll get to the motherboard in a bit).

My thinking was this: What the hey, the 285 is in stock, it’s a £100 cheaper, it’s quieter, it runs cooler and if I do ever need the extra speed I can SLI it. Should have read a bit more carefully. Ideally I wanted HDMI to get the best out of my monitor, and the 285 cards supports HDMI, so great.

NO, what they support is a DVI to HDMI adapter, which isn’t quite the same – and faffing about to connect up the cards s/pdif. One that was missing from the box. Not a big issue, but irritating all the same. 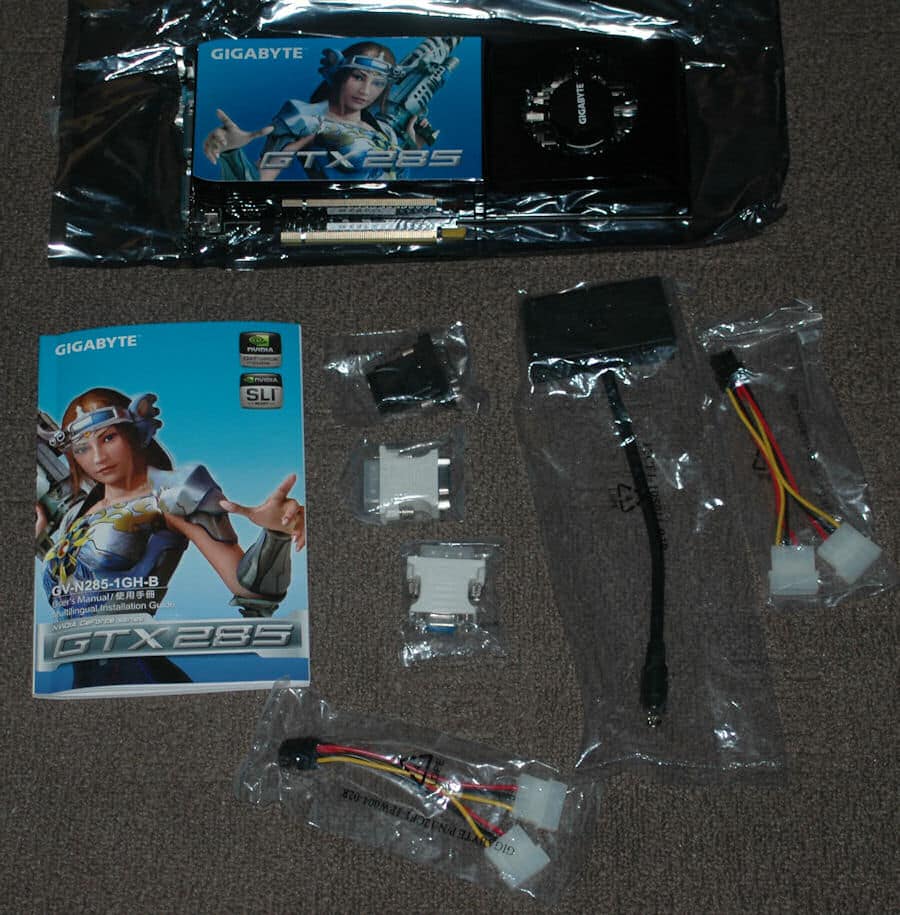 The second thing that stuck me later – or rather my son, as he pointed it out – no software or games bundle. Didn’t give it any thought myself, but freebies do sweeten the deal when the gpu alone that you are upgrading (yet again) costs far more than a top of the range PS3 or XBox360. When you think how flaming buggy games like Fable are on a PC verses a console…

On a quick hindsight scout:

Looking at the 295 it’s even bleaker.  More evidence of penny-pinching in the face of a recession, I guess, but miserly given the exorbitant price of these things.

On reflection I should have been more patient and waited, but I got fed up dodging around all the other parts that had arrived.

Now to the motherboard.

Must be getting old, because I’d never have slipped up like this when I was still active in the computer trade. Basically I went with Gigabytes GA-ex58 Extreme motherboard as it ticked all the boxed. 2oz copper board is drool-worthy, Silent pipe 2 cooling, up to 3x SLi, 2 PCI, and several PCI-e slots. 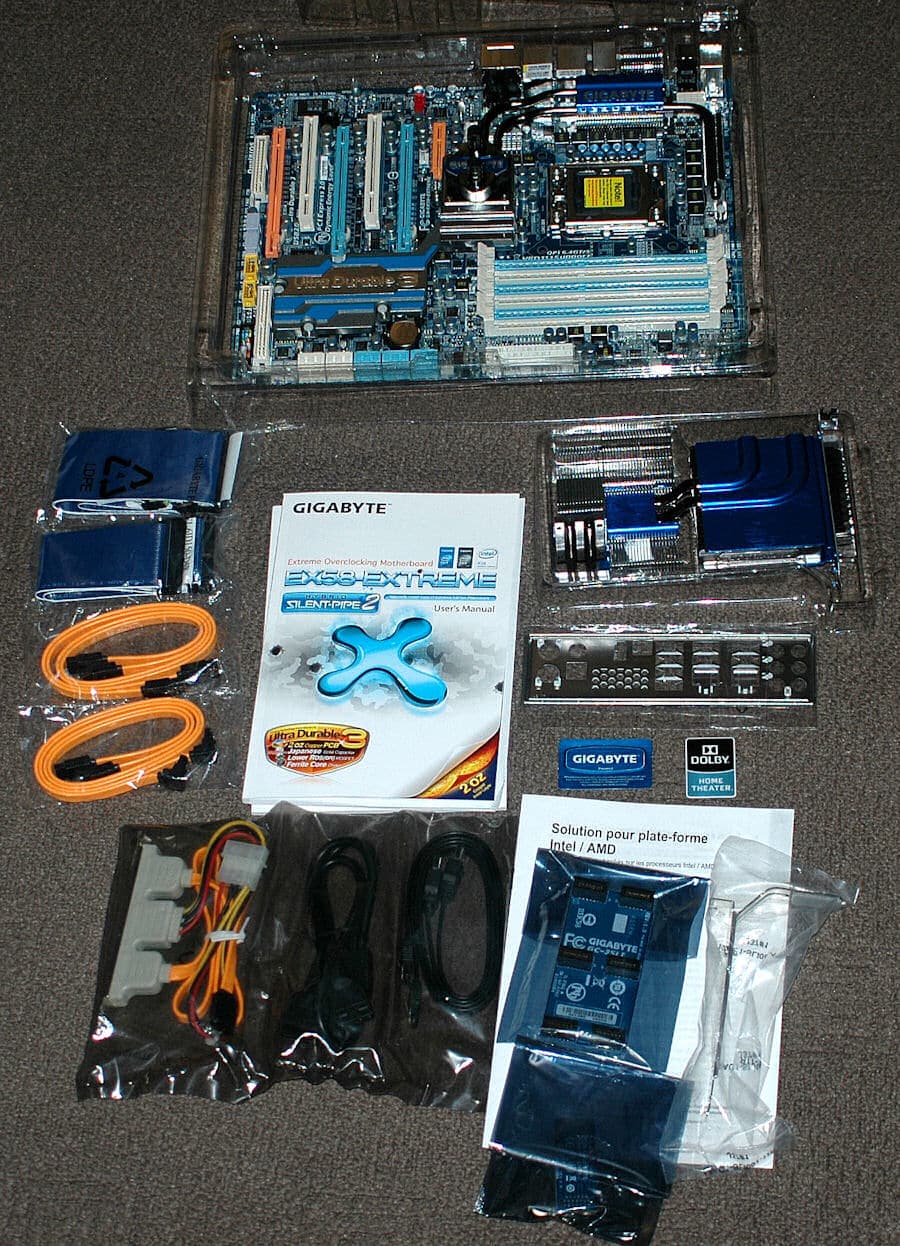 When you look at the board and read the reviews this isn’t immediately obvious, not until you build a computer with one, but the board layout sucks. Admittedly much of this is a common problem with the latest (massive) dual slot hogging graphics cards, but still.

At the start you have the following 7 usable slots, in order:

However, the minute you connect the (feature item) Hybrid Silent Pipe Module you cover up the PCIe (x1),  PCIe (x4). Basically these slots are neither use nor ornament because the cooler blocks any and all access to them. HOW STUPID!

So, now the 5 real usable slots, in order are down to:

Obviously you are not going to use a cheap low-end PCI express card with a motherboard costing near £250, so in goes your GTX 285 (or whatever). Now, while there are 3 PCIe (x16) listed I believe the last one is only actually x8 and the manual recommends you put the first card in slot one and only use this end one if you go to the extreme of fitting 3 GTX 285 or even 3 GTX 290 (3x ATI 4870, whatever). So, you put in (a) graphic card which, taking up 2 slots covers up one of your PCI sockets.

So, in truth, allowing for a single GPU and ignoring the lunacy of 3x sLi, the board only actually has the following usable slots:

I might have a board with 2 PCI slots, but that’s actually BS, because in reality, for the target market, it only has one single free slot and, given said target market lends itself to 2 x SLI, it really has no free slots whatsoever.

As I say, I should have thought, but while I used to build anything up to 20 new computers a day, now I build maybe one every two years, now.

So, here’s the dilemma I was in:

While the board has a reasonably decent onboard sound card, mine happens to be a top of the range Creative SoundBlaster X-Fi Elite Pro which cost almost as much as the board, so that’s not getting mothballed.

However, equally essential is my Netgear WN311B wireless card.

So, here I am surrounded by leading computer parts, scowling, cursing and muttering under my breath. My options are:

a) discard the X-Fi soundcard (not going to happen, so that also stuffs up my idea of adding a second Geforce 285.

or b) Discard my wireless network card – and do without Internet!!!
Aaaargghhhh.
The solution of course is to run 10m or so of CAT6 cabling from the ethernet hub to my cave, but my long-suffering wife quite reasonably has very firm ideas about me not ever feeding a tonne of wiring and conduit through the kitchen.

As it happens, that’s exactly what I have done, sans the conduit. It is only a temporary measure while I await delivery of choice c) NetGear’s WN311 RangeMax NEXT Wireless-N USB Adapter. Well, there is no way I am going go several days without Internet!

One yes – another bad thing about the GA-EX58 Extreme – the rotten misers used relatively cheap and nasty flat IDE cables instead of the tider and more airflow friendly rounded cables. Given this very expensive board otherwise screams luxury item it was a let down to see penny-pinching on the cables.

All that aside, which I suspect applies to most high-end motherboards now, the board is gorgeous!

And the final kick in the teeth. I rebuilt all the ‘old’ but still fast parts back into the original case, set it up, and the previously solid Antec Phantom power supply failed. Well, it does still work but for some bizarre reason when I emptied the recycle bin it started squealing like a pig. Left it a bit and tried a few more times. In case it was power overload I also tried it with all the DVD’s etc unplugged – it huffed, it puffed and it screamed the house down!  It will run the computer fine – if you can tolerate the sort of high-pitched whining noise that vibrates through the house, sets your teeth on edge and has you cringing in pain as the Big Bad Wolf draws his nails down a blackboard and stuffs three terrified little piggies into meat grinder.

Mutters and adds a OCZ StealthXStream 600W Active PFC to the part orders list.  Not tried these before but it read well, he says, hopefully.