Well, it seems Aunty Beeb has upset a lot of people with the most recent episode of Dr Who, the one entitled ‘Can you hear me’.

The thin plot dodges (well lumbers) around mental health concerns and Gods that feed on fear. (Let’s skip the theology part, ‘cos, yer…)

The Metro’s title – ‘BBC responds to Doctor Who backlash over Time Lord’s reaction to Graham’s cancer fears – is typical of the many articles on the topic, though I approach it more from the other side.

I see it more as the BBC writers trying to force-feed the audience their own virtue-signalling ‘wokeness’ and failing miserably. I know a few people on the autistic spectrum, and with other mental health issues – I’m one of ’em. I also know people who survived cancer (etc) – and others that didn’t, and others that won’t. The part written for Bradley was realistic, the end part for the Doctor, not so much. At all.

Her ‘alienness’ is inferred to in a intellectual / autistic spectrum way, rather than otherwordly, or even dissociative disorder sort of way (which would actually fit the current narrative). With this in mind:

Firstly, people on the autistic spectrum are highly unlikely to make a pronounced point about something being awkward, it just would be. (Though, if they didn’t know you, they might apologise and say something like, “I’m not good with people, sorry“). The way they portrayed it was clumsy, almost painful to watch.

The awkwardness or even wooden speech, yes, OK. Looking away and finding something to do to avoid the situation, yes, absolutely. But saying you are going to do so, no.

One comment I read, by a person with GAD), pointed it out in a similar way, saying, “They tend to do exactly what the doctor does but without it being spelled out like she did“. Spelling it out is were they failed. 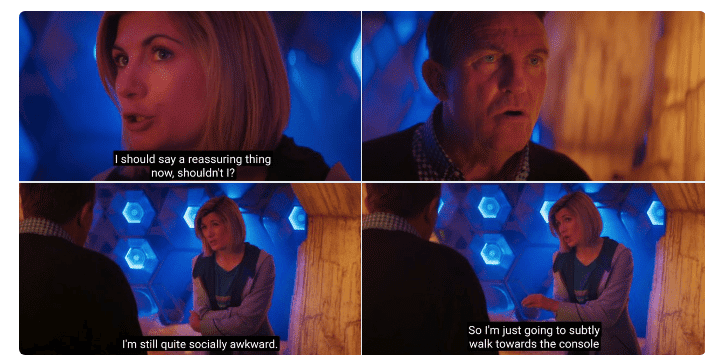 There is a body of thought in academic circles that believes that rather than feeling nothing or being detached autism is actually caused (in part) by feeling too much and being overloaded, though the result is the same. The Doctor stating “I’ll just stand over here and do something” made it contrived. Fake. More so ‘cos (s)he has never done this in the past 50 years of the series.

There are other psychological reasons you can attribute to such distancing, but again, they fit neither the persona of the current or past doctors, nor the wooden acting in that last minute, for which I’m inclined to blame the writers and director rather than Jodie Whittaker.

Secondly, time travel. The Doctor, particularly this iteration, could/would be more like, “Oh, right, they cured that in the 22nd century, quick time jump, pop two pills, that’s you sorted.”

Heels vs Babyface has a good take on it too, (noting that he swears a lot):