UK Elections 2017: A fundamental party you can hope for

So, here we are again, voting days away, only it’s not so easy this time.

Against:
Tories as a whole are in it for themselves and their corporate buddies. They may have plenty of rhetoric, but the woman is so shifty it’s almost unclean to watch. Mrs May, a woman of the people? Not bloody likely, her party bus was filmed close up on a farm complex, away from the public eye and us ‘dirty’ voters. That is as fake as it gets. Plus she wants to bring back fox hunting, so I’ve gone right off her with that as well.

Their policy is pretty much a tax-free gravy train for the corporations and multinationals, paid for by the middle and working classes.

For:
I like a lot of his policies. Most, actually, but not all.
Against:
Instead of being owned by the corporations, he’s owned by the unions. Not sure which is the worst! He cannot be trusted on immigration, or on dealing with terrorism. In fact, I’d go as far as to suggest that in his barmy world they are not ‘terrorists’ they are ‘deeply misunderstood freedom fighters’ (that just happen to happily murder women and children) and if we just talked to them we’d all get along wonderfully. And nationalising everything? That’s just bloody crazy. The country is up to its neck in debt after bailing out the banks (I’d have let the buggers sink!), his idea to shake the rich to find the hundreds of billions needed for all his wish list is just unreal. He CANNOT be trusted to run the country.

UKIP?: Right about now I’m in favour of a lot of their policies! They have no chance of getting in, but still, racist slurs aside, they talk to the ‘common man’ Including immigrants!

Greens?: They just appear to want Brexit reversed. They are a joke.

SNP?: They are downright dangerous.

Lib Dems?: Now they really are a joke! They want to legalised narcotic drugs, reverse the Brexit vote (vote again until you get it “right”). Plus they are responsible in a large part for university fees rocketing from Â£3,000 a year to Â£9,000. There is absolutely nothing liberal or democratic about that party. They are an utter joke and need to lose what few seats they still hold.

So, basically, that leaves me learning towards Tory, but with utter revulsion, and my wife, tentatively (to save the NHS) leaning towards Labour, but really not trusting them.

So I made up a new party. A bit late this time around, but if a party had the following manifesto, AND I could trust them to deliver on the promises without destroying the country in the process, I’d vote for something like the (fictitious) ‘Fundamental Party’ below, that takes a bit from UKIP, a chunk from Labour, (bugger all from the Lib Dem loonies!), and has a certain Conservative business-headedness about them.

I give you the Fundamental Party: 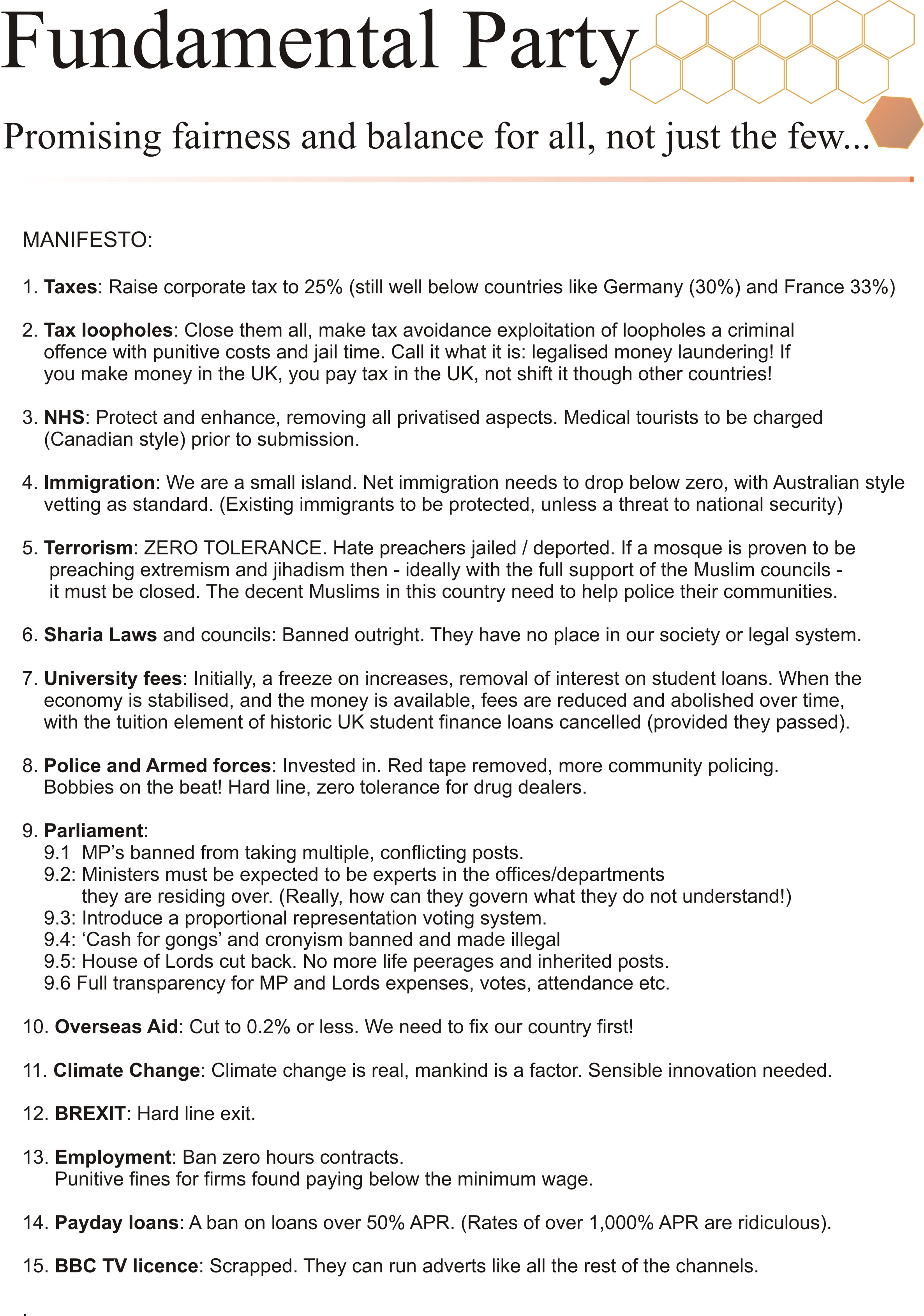