Facebook trolls? Or do they actually believe what they say?

Mostly I’m bored with the whole pandemic. In the great scheme of things, it’s not that bad, depending how you approach it, of course. Before it’s run its course over a million will have died, and millions more have long-term health problems, so I’m not dismissing the virus, merely looking at the picture on Facebook.

The Sky news article, for once not spreading fear, is bland. It basically says we (England) now count the covid-19 deaths differently, more like others. Irrelevant to this post, but it highlights a problem, or two. Firstly, it significantly drops the number of death due to the virus in the country. This is therefore a big win for the government, it makes them seems like they are doing a much better (or much less worse) job. Secondly, and this applies globally, the death rate isn’t the death rate, it’s how governments – and media – decide to massage the figures to put a spin on things. As they always have. All governments.

Basically this argument comes down to:

Government: “If they die with Covid-19, record it.”
Autopsy report: “He died of Covid-19”
Media: “Look how badly the UK are handling this, look at all the dead!”
Government: “If they die from underlying conditions, (complicated by Covid-19), record it (differently).”
Autopsy report: “He died of a heart attack (following Covid-19)”
Media: “Look how the UK are handling this”

It’s a PR exercise with co-morbidity being massaged. Personally, I’d rather see two sets of genuine figures cited side by side, honestly (e.g. died of Covid, died of underlying complications following Covid). It’s disingenuous to report them in such a way as to save face. 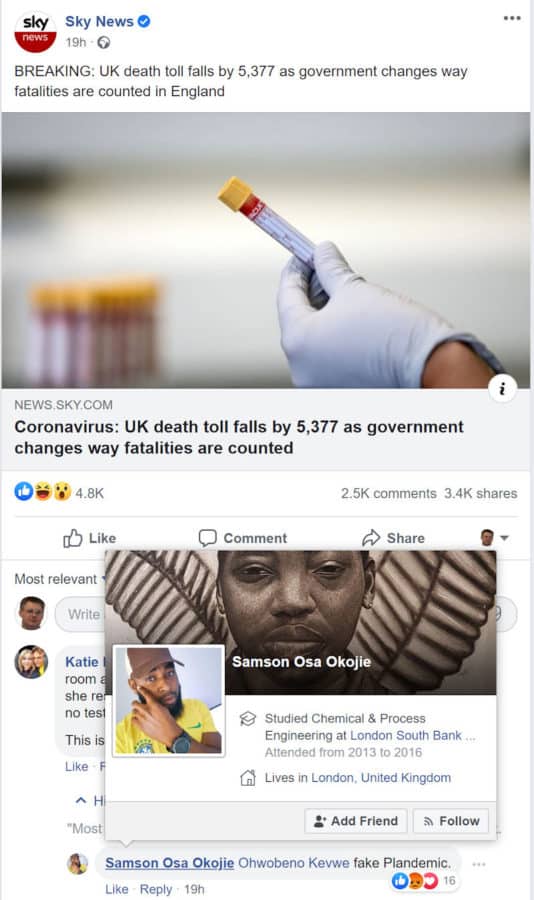 More interesting though, in the case of this post, was one of the comments, calling it a ‘fake plandemic’:

For some reason, one must assume trolling, the comment was below one of someone saying her mother (in a care home) was shut in a room and left to die. The short comment stood out for being out of place.

At the time of writing it gained the troll(?) 8 thumbs up, 3 hearts, 2 laughs and 4 angry faces, suggesting the majority supported the comment! 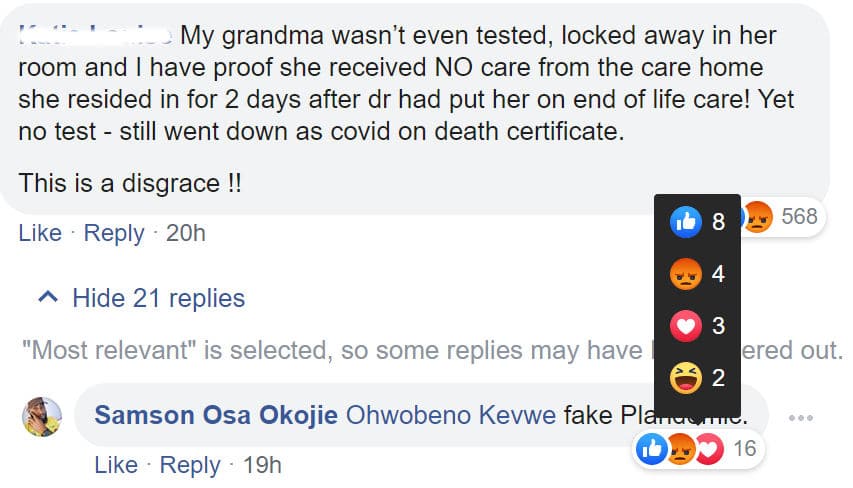 I am rather wary of the woman’s angry comment as it has a ranty feel to it. How much is fact, how much is supposition, how much was tweaked to fit the narrative of the Sky post? It feels – to me – like the focus of the rant is that there was no test done, not that her grandmother allegedly received no care in her final days, or even that she died. No, the woman was angry over the death certificate.

People handle grief differently, obviously, but it has a manufactured feel to me. Less obviously, ignoring the poor grammar, (which if it were a fake post could even be intentional), it wasn’t a direct reply*, but written in a text editor or similar, elsewhere, and pasted into Facebook. *(Facebook doesn’t directly allow line breaks, or any other formatting.)

As for the guy, Samson, who apparently studied chemical engineering, he isn’t terribly smart. “Fake plandemic”? Fake diploma, perhaps. (His mate, Ohwobeno, is from Tennesee, if you wondered).

“Fake Plandemic” suggests that the pandemic is fake news, which given over 750,000 deaths, is clearly ludicrous. The virus is real. Its spread is global. It is, therefore, a pandemic.

The “plandemic” misspelling implies either the pandemic was planned, or that both the virus and this pandemic were planned. Let’s examine this.

Both are classic conspiracy theories of the tinfoil hat variation. Still, theoretically, in a Hollywood movie or conspiracy novel fashion, a virus could be spread in secret by a rogue agent (e.g. the US financed CIA, or the Chinese Guoanbu).
Huzzah!
Clear ‘proof’ that Covid-19 is a planned pandemic*
*(5G was not involved, drinking bleach is not a cure).

But wait, there are two problems with this conspiracy theory: cui bono and r0.

Cui bono: to whose benefit? There are countries that – so far – have come off less worse than others, but there are no net winners here, so that theory is full of holes.

r0: the infection rate and, more importantly, the mortality rate.

The average for Covid-19 has yet to be arrived at, but it looking like being around 2.5, so less infectious than SARS. If it was engineered, they did a pretty shoddy job!

And again, even compared to SARS, as a bio-engineered WMD, Covid-19 (SARS-CoV-2) is a washout.

Quarantine is obviously the factor here, but for added perspective, chickenpox has an r0 of 10-12, while measles has an r0 of 16-18.

The ONLY clear factor in this “plandemic” is the use news and fake news by mainstream media to push their own views and agendas. Similarly, by governments to direct or misdirect the public over how well or how badly they are handling the pandemic.

Three things then are certain about this ‘plandemic’:

Firstly, while it is dangerous and could – potentially – kill hundreds of millions, the reality is that is isn’t as dangerous as the media want you to believe.
And why is that? Why do the media moguls apparently want to spread Fear, Uncertainly and Doubt (F.U.D.)?
Why?
Because people buy into fear. F.U.D sells content, it gets clicks. It makes them more money.
It is that simple. Bad news is good news, for them. Slow news days are a thing, a disaster though, that’s news!

Secondly, governments are for the most part all handling this in their own ways, and that way appears to be running around like scared children, changing policies depending on the way the wind is blowing. i.e. They are reacting to the public’s reaction to the pandemic, not to the pandemic – which is being controlled by mainstream and social media.

Thirdly, which really doesn’t surprise psychiatrists or sociologists, if this was a dry run test (whether or not by a shadowy government or terrorist agency), we failed. If the next pandemic proved to be truly civilisation-ending, we’d fail again. America would probably fall first!

So, nothing planned about this pandemic.

I’m not a virologist or geneticist, and I certainly wouldn’t be allowed near a BSL-4 or higher (if they exist) biolab. Still, with the right team and state-level off-books finance, if it was planned, properly, the human rate would currently be up around 6.5 billion dead. Thus:

Stage one: Weaponise MERS and pump up it’s infection rate.

Stage two: tweak the incubation and prodromal rates to hide the spread longer.

Within the first month, up to a billion people will have been in contact with the disease, and carried it to every major city on Earth.

By the second month, panic and denial in equal measures. So it continues to spread.

By the third month the more aggressive countries (looking at you America) will be in full on “right to bear arms” mode and, given their current (arguably less than stable) president, eyeballing GBU-43/B MOABs and tactical nukes to “contain the situation.” (Yes, as with the Dustin Hoffman Outbreak movie)

But such measures would already be too late, the front line first responders (fire, police, medical) will have been amongst the first to die, the stores are empty (through panic buying and looting), and the infrastructure is gone.

By the fourth month, power and clean water will be a luxury, the billions laying dead will be spreading more death and disease.

And you’ll STILL have idiots saying it’s “fake news”, it’s a “plandemic” and “it’s my God-given right not to wear a face mask”, and other such verbal diatribe as “Why should I practice social distancing, it won’t affect me, I’m young and healthy”.

Only in America, eh!

If Trump wants to “Make America Great Again” (Or grate ;) ), he has his work cut out for him, ‘cos only in America, eh! 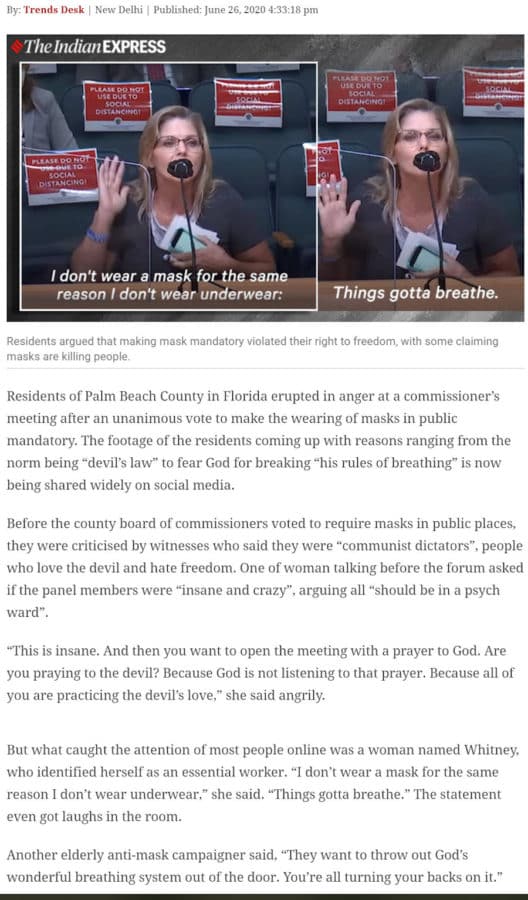 As the saying goes, you can’t argue with stupid people, they’ll just drag you down to their level and beat you with experience.