Remember the UK riots of 2011? The press and media coverage, the anger, horror, and fear projected by “the establishment.” The horrendous cost to the economy. I dare say sociologists are still picking over the bones of it.

Cost to the country, put around £135 million.

Similar comparisons may be made to other similar events, such as the Toxteth riots in the 80’s.

Actually I was ‘there’ for the Toxteth riots; we knew about it several weeks before it went down (though we didn’t know about it at the time, per se). In the weeks before the riots started, furtive scallies were popping to the pubs in the surrounding areas, taking advance orders. They’d come over to your table, lean in close and whisper something like, “Hey lar, wanna get a VCR cheap like? Get y’ one in a few weeks if yer interested.”

The official reason for the riots was racial tensions, aggravated by rising unemployment in the area, but I would have to quibble over that. It may be been the flashpoint, but the looting was planned weeks if not months in advance. The scallies (young, white, Liverpudlians) knew exactly which shops and stores they planned to loot, and when. It may be argued they were just taking advantage of the situation, but it’s reasonable to suggest, even to assume that people poured flame on the situation, pushed it towards flaring up.

I was in Whiston hospital when it went down and a lot were hurt, some badly. All the hospitals in the area were busy that night, it was awful, it still holds memories for my generation.

Meanwhile, (and there are plenty of similar cases (e.g. Maxwell scandal, Equitable Life, Governments own pension raids etc)), we have the likes of Sir Philip Green. He and his wife took over £1.5 billion out their company, and left it to collapse, leaving a £571 million pension deficit to be carried by the public.

His team of highly-paid lawyers vehemently declare he did nothing wrong, within the letter of the law. MPs request he does the right thing, inquiries are held. The press moans. And he sits pretty on a £100 million boat.

What I find most interesting is not that he and his wife took the money, or the immortality of it, or even the wheedling tone of MPs and ministers, it’s the fact a) there’s no proportional outrage by the press and TV and b) Sir Phil and Lady Green keep their titles, despite many calls to have the titles stripped away.

You may argue no one was hurt or assaulted, but I’ve known people who have lost their entire pension funds in similar ways and the affect and trauma is palpable. People now working into their 70’s when they hoped to retire at 55. If life teaches nothing else, it’s that mental scars can be harder to heal than physical ones.

“Following high-profile calls that he be stripped of his knighthood, Green agreed to pay £363m into the pension scheme.” … in a Guardian expose about him paying millions to silence whistle blowers.

Less titled folk do not get off so lightly, even if the offence is a 1/2000 the amount. (I can’t imagine you would offer to hand over that sort of cash unless you know you are guilty. Not even to keep a title.)

Fraud by abuse of position is an offence under section 1(2)(c) of the Fraud Act 2006. It carries a maximum sentence of 10 years’ imprisonment.

There may be differences in method, and pillaging instead of ‘legal’ use of loopholes, but it amounts to the same.

There are similar parallels to how the press and media react to benefit fraud by the poor (illegal, BAD), and tax evasion by the rich and titled, the powerful and the wealthy (legal, “they did nothing wrong”, good).

If you or I defraud the HMRC / IRS (etc) we risk fines, prison, naming and shaming in the local papers. If a multi-millionaire or billionaire person or company evades tax in much the same way, but with better lawyers and accountants, their worth can go up. After all they are looking after their shareholders. I’ve read accounts were they claim it’s their “duty”, to dodge tax and thus enrich shareholders. (Especially if they are a majority shareholder).

In may surprise you to know that many tax laws were, to a large degree, prepared by the big four tax companies, who are consultants and advisers to the Bank of England, Tax Office etc..

The irony and hypocrisy of it all is this: the treasury and economy is haemorrhaging billions due to tax evasion, so they go to the big four for help, who add loopholes to help their clients evade tax, exasperating the problem. As some have observed, it’s like asking foxes to guard your hens.

“HM Revenue and Customs had to seek outside help because it was engaged in a “battle it cannot win” in seeking to stem the losses to the exchequer from tax avoidance.” And it’s all perfectly legal and proper.

The Big 4 are at the heart of tax haven abuse. “Leading estimates show that profit shifting by multinational companies is responsible for tax revenue losses globally of $500 billion or more each year.”

According to Full Facts, the UK loses an estimated £34 billion a year, including tax avoidance (exploiting legal loopholes) at £2.7Bn, and tax evasion (illegally hiding activities) at 4.4Bn. The Institute of Chartered Accountants arrives at a similar figure, but with better breakdowns.

It starts at the top

How can this be, you may wonder. Why doesn’t the government do something? A reasonable question, you’d think. And indeed there have been enquiries.

For instance, it was debated in parliament early in 2020, with the FT reporting MPs call for crackdown on advisers behind unlawful tax avoidance.

Funnily enough, a few years back, the very same MPs were rather more reticent when it came to their own activities. Not simply the many scandals over expenses fiddles, but also because they passed laws to exempt themselves for tax evasion. 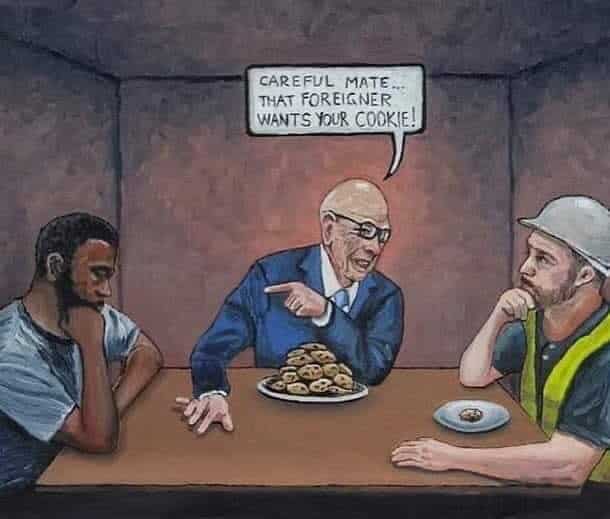 As some argued in /reddit, for the second image, the worker on the right has too much cookie on his plate. The comparative reality is that he barely has crumbs – and the greedy corporate hog is trying to work out how to take even those bare scraps off him too.

These are the same sort of people that grew obscenely wealthy on the backs of slavery. The only difference is at least the chained slaves of the past knew their situation, modern slaves are kept distracted by the media and streaming entertainment. By misdirection.

Also of interest: Nobel Laureate Economist Says American Inequality Didn’t Just Happen. It Was Created.
(Based on the 2013 book ‘The Price of Inequality: How Today’s Divided Society Endangers Our Future’ by Joseph E. Stiglitz)

Sociologists (along with philosophers and economists) may consider how it all happens, but it’s psychologists that are left to pick up the pieces, eh.