Remoaners never miss a chance, do they.

Any and all negatives about the EU – the riots and protests in Brussels, in Spain, all across France, are ignored, are whitewashed by mainstream media.

Project Fear is promoted as the future, as a cast-iron truth, and not, as it really is, as an almost impossible worst case possible scenario with the “bad” dialled up to 100% and “good” pushed down to “zero”.

You never see the counter argument from the government, or remainers, you never see good pushed to 100% and bad down to zero because that would be ridiculously unbelievable. And counter to what they want you to fear. Equally, and more damning, they never offer a balance, this is the worst, this is the best, this is the reality, good and bad.

Anything positive – if it even gets the barest mention – has “despite Brexit” pinned to it.

Anything bad – real or imaginary – automatically has a large neon sign proclaiming “BECAUSE OF BREXIT”.

The value of the Â£ drops, it’s because of Brexit. Not the fault of the German economy tottering, not the fault of most EU countries being in recession and/or effectively bankrupt, not as a fault of the trade war between the EU and China and the EU, not because of the twitch in oil prices after attacks on Saudi Oil fields. Nope, just Brexit.

My car has a flat tyre – Brexit is affection the pressure. (Yep, read that one!)

Abortion laws change in Alabama – some remoaner (from Portugal) leaps and comments, “It’s because of Brexit”. (Read that, and many others, all equally farcical). Funny how so many seem to come from France, Spain, Portugal, etc.

Thomson Cook, who apparently have been losing money since at least 2011, go bust – Blame Brexit.

LBC, below didn’t blame Brexit, though other papers – like The Independent – papers with a known bias and anti-UK stance on the referendum, ran with front page headlines blaming Brexit. Commentors all over social media leapt in – without evidence – to, yep, Blame Brexit. Brexit which, incidentally, hasn’t happened. Which hasn’t happened because remainers refuse to accept or tolerate the result, remainers like Daimo, below. 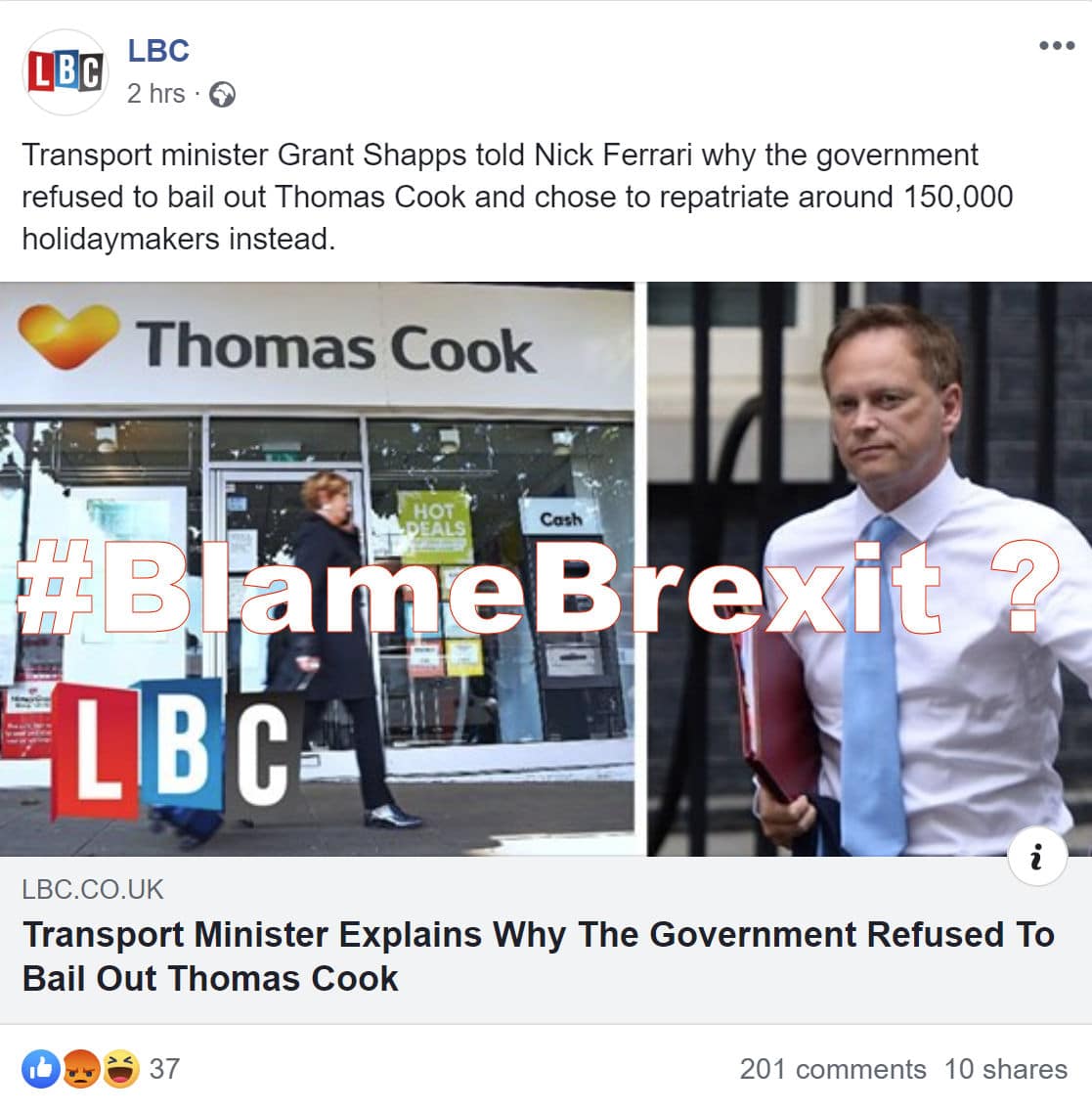 The solution and blame – to Thomas Cook going bust – a suggestion I’ve laughed at before – was punted by one Facebook LBC commentor (Daimo L): to wit ” All ballot papers should carry an IQ test!” 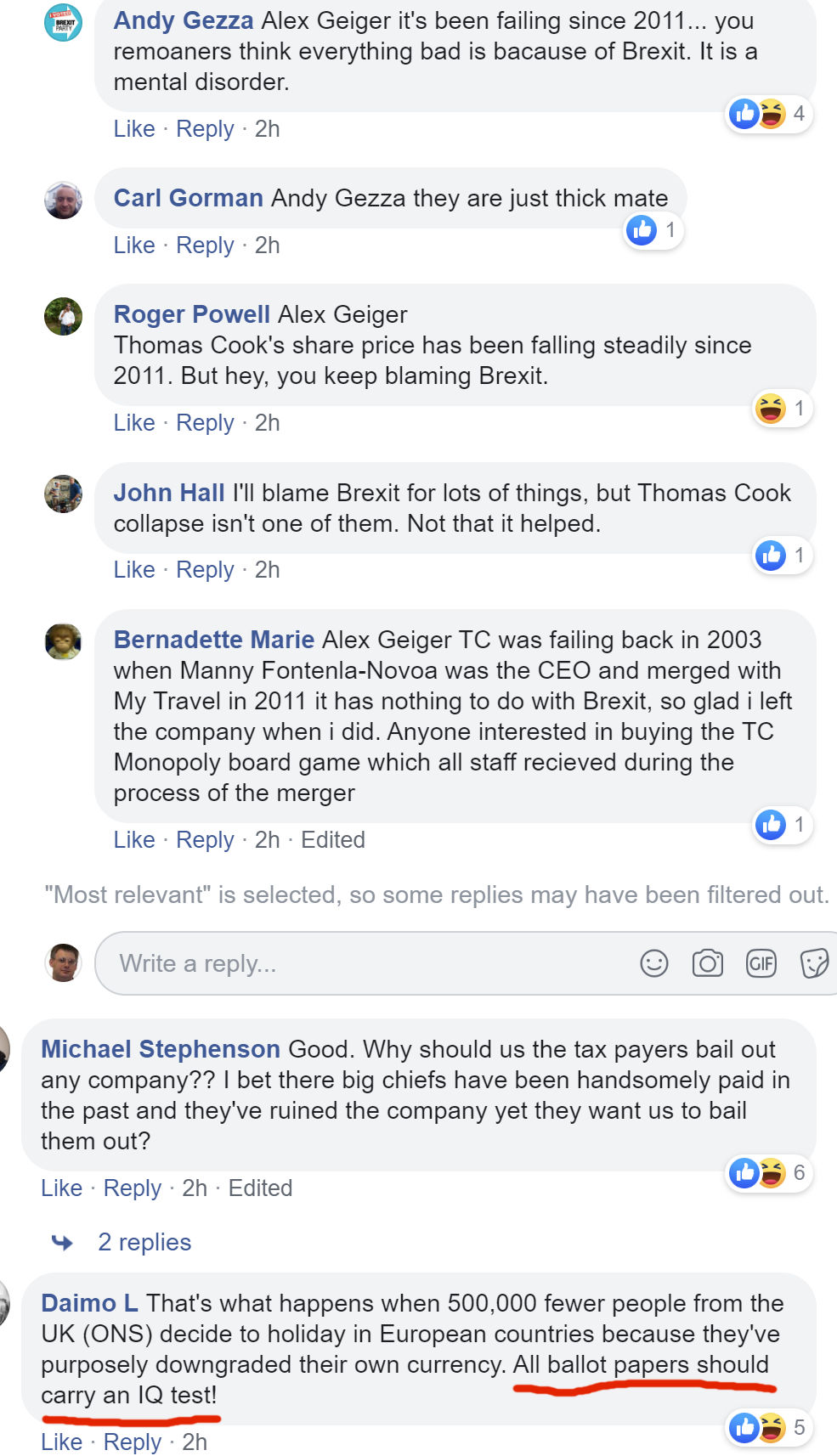 Yep, in his *cough* expert opinion, the solution to Brexit, to all the world’s woes, is to make voters take an IQ test.

And what, dear soul, would that IQ cap be?

Would you set the cap just below yours? Or just above mine?

Do tell us yours, John. We poor, stupid, “didn’t know what we voted for” Leavers would like to know your IQ, and what you would set the cap at.

As Stephen Hawking once said in interview, when asked his IQ, “I have no idea. People who boast about their IQ are losers.” (New York Times, 2004

As one particular paper said, “Intelligence is often confused with knowledge, wisdom, memory, or other attributes and in general has a variety of meanings depending on the context in which it is used. The term IQ usually refers to the attempt to measure a person’s mental agility.” (Newsweek, 2018)

There are over 127 different definitions of “intelligence”, but I suppose you, and people like you, would erase definitions from authoritative texts (like ‘The MIT Encyclopedia of the Cognitive Sciences’, which sits alongside others by my desk), and replace them all with “Voted / would vote remain.”

(You can, of course, ignore the fact the tally of Leavers include MP Sir John Redwood who, with a Ph.D in philosophy and directorships including Rothschild’s bank, is almost certainly in the top 2% and, being an MP, being part of the Westminster bubble, knew what he was voting for).

Also, for the record, I estimate that the average IQ in the House of Commons is just shy of 120, the top 20%, certainly, matched only by, oh I dunno, a little over 13.5 million people on the UK. Allowing we are staying with statistics and not unestablishable facts, 52% of those would, arguably, vote/have voted leave – some 7 million people. 7 million people – using your argument – who are likely to have an IQ as high, or higher than most of parliament.

I await your IQ with baited breath, Daimo L. I can do with a laugh.

Quora: What is the average IQ of Nobel Laureates?