Depending on my mood and reason for reading, I can flick through an entire text book in seconds, speed reading to gauge its usefulness, or take a full day or two to read a fantasy novel, savouring every chapter. I can’t begin to guess the number of books I’ve read over my life, but like a number of my friends it’s not measured in scores or hundred but thousands, in tens of thousands – dry text books on every topic imaginable and books on every genre from autobiographies to westerns and war stories. No surprise that I never took to romance or even the classics like the Brontes and Dickens, preferring pulp fantasy from the 60’s and more modern ones from Stephen King and the genius of Terry Pratchett, Terry Brooks and Raymond Feist.

Thing is, I happen to strongly agree with sentiments of the authors below. Unless you are familiar with a wide variety of material, how can you know what’s best for you? Once you do know, how can you do your books – your readers – justice until you yourself have lost yourself for a while in hundreds of novels from scores of writers? 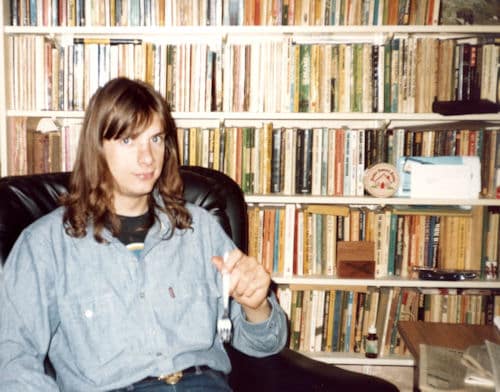 The bookshelf picture above was taken some years back at a friend’s house. If you love books, you might want to see this wonderful gallery of book collections

“It seems to me that anyone whose library consists of a Kindle lying on a table is some sort of bloodless nerd.”
~ Penelope Lively

“What a lot we lost when we stopped writing letters. You can’t reread a phone call.”
~ Liz Carpenter

“Read a lot, finding out what kind of writing turns you on, in order to develop a criterion for your own writing. And then trust it – and yourself.”
~ Rosemary Daniell

“Becoming the reader is the essence of becoming a writer.”
~ John O’Hara

“Start early and work hard. A writer’s apprenticeship usually involves writing a million words (which are then discarded) before he’s almost ready to begin. That takes a while.”
~ David Eddings

“Read, read, read. Read everything – trash, classics, good and bad, and see how they do it. Just like a carpenter who works as an apprentice and studies the most. Read! You’ll absorb it. Then write. If it is good, you’ll find out. If it’s not, throw it out the window.”
~ William Faulkner

“I took a number of stories by popular writers as well as others by Maupassant, O. Henry, Stevenson, etc., and studied them carefully. Modifying what I learned over the next few years, I began to sell.” ~ Louis L’Amour

“Reading a book is like re-writing it for yourself. You bring to a novel anything you read, all your experience of the world. You bring your history and you read it in your terms.”
~ Angela Carter

“In an abundant society where people have laptops, cellphones, iPods and minds like empty rooms, I still plod along with books.”
~ Harper Lee

“If you want to be a writer, you must do two things above all others: read a lot and write a lot… reading is the creative center of a writer’s life… you cannot hope to sweep someone else away by the force of your writing until it has been done to you.”
~ Stephen King

“Most people won’t realise that writing is a craft. You have to take your apprenticeship in it like anything else.”
~ Katherine Ann Porter

“Cram your head with characters and stories. Abuse your library privileges. Never stop looking at the world, and never stop reading to find out what sense other people have made of it. If people give you a hard time and tell you to get your nose out of a book, tell them you’re working. Tell them it’s research. Tell them to pipe down and leave you alone.”
~ Jennifer Weiner

My curse is rumination, that and getting lost in research. I once started a shortly filler story on a character with a side interest in gems. A few months later I was dripping crystalline structures, ore deposits and assaying methods from every orifice. Research is necessary to make your story believable, but there comes a time when you have to stop and write.

“The man is most original who can adapt from the greatest number of resources.”
~ Thomas Carlyle

“Experience is one thing you can’t get for nothing.”
~ Oscar Wilde

“Imagination grows by exercise, and contrary to common belief, is more powerful in the mature than in the young.”
~ W. Somerset Maugham

“I don’t believe in writing anything that I don’t know about or haven’t researched about personally. I like to transport the reader to places, and in order to do that I have to do the research.”
~ Jackie Collins

“In time I began to understand that it’s when you start writing that you really find out what you don’t know and need to know.”
~ David McCullough

“The best way to become acquainted with a subject is to write about it.”
~ Benjamin Disraeli