Without getting into the added complexities of following your conversations with others, generally speaking, whenever you speak you are doing at least three things at once. You are planning what to say next, saying what you previously planned and monitoring what you just said in order to check that it is actually what you meant to say. It is hardly surprising then that, even for a well rehearsed act, the delivery is broken up by hesitations, false starts, self-corrections fillers, repetitions and so on.

These restatements are either deliberate explanations, or are the natural features of discourse. The latter naturally do not appear in regular writing.

Fillers are used to keep the conversation flowing while the person is composing their next sentence. The fillers Carrott normally use are ‘er’, ‘erm’ and ‘ug’, also words like ‘right’, ‘like’ and ‘y’know.’ They also show up as repeated words and phrases such as, " It it really is, it it," (B,6), or (B,39) "and the gear-lever, the gear-lever like."

Another characteristic of formulations is hesitations and false starts. These occurs whenever a person is unsure about something, or perhaps have been temporarily ruffled – as was the case in the previous page where Jasper Carrott failed to get the expected laugh to his punch-line.

Finally, there are repetitions where you start a sentence, find it is not what you meant to say and so begin again. A very good example of this can be found in (B,34-36), where it reads:

He begins his sentence, corrects it twice, then hits the punch-line.

Deliberate restatements are another matter though. These are used when you repeat and perhaps reformulate a sentence to get a point over, to give a desired effect such as build up or emphasis. It is equally applicable to written and verbal forms of communication, though it is far more common in the latter. 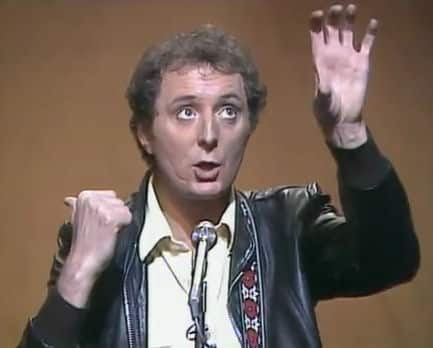 These reformulation are particularly important for stage acts like Jasper Carrott’s as, besides being used for emphasis and build up, they extend the material and the duration of the show to an acceptable length.