Pauses, coupled with intonation, are a significant part of speech and in Jasper Carrott’s routines have a number of different uses. These can be divided into deliberate and unconscious pauses. The former will include stopping for breath, pausing for a build up or to prompt a response from the audience. The unintentional pauses, which are a natural part of speech – normal non fluency features – are the verbal equivalent of punctuation in writing.

Unintentional pauses can be divided into two parts, firstly as punctuation, or secondly as stumbles in speech. The latter form has no comparison with writing and can only be commented on in a general way. They appear whenever a person corrects their speech. One good example of this in Jasper Carrot’s stage routine is (B,1-3), where it reads:

Corrected, this would simply read, "Now look, I’ve got nothing against mother-in-laws." What has happened is he has just started a new act and, perhaps due to nerves, is having a little trouble remembering and formulating his lines.

The second form of pauses occur where you might put a comma or a full stop in a written sentence. Obviously this does not happen every time. What happens is that intonation, stress and even gesticulation take over to mark where a clause or sentence starts or finishes. However, it is regular enough to notice it happening. Indeed, going from the transcripts, it also occurs with conjunctions where ‘and’ or ‘but’ is stringing sentences together. for example, in (B,11-14) it reads:

"Almost an all time record for Warwickshire (.) and people told me about her driving and I never believed it (1) (T) and I thought it’s just being exaggerated."

In written form this would be conveyed as:
"Almost an all time record for Warwickshire. People told me about her driving and I never believed it, I thought it was just being exaggerated."

The count on pauses in the transcripts includes tuts, laughter and drawing breath. In the book form commas, semi-colons and so forth are counted as pauses. From Appendix E we can see that the relationship of pauses to conjunctions (B,2.12), (C2.83) and (D3.33) indicates this also. As his act develops and becomes more polished with time, he uses more intonation and less conjunctions to continue his dialogue.

Statistically, the difference between spoken and written punctuation is quite small. Pauses per sentence are (B,3.6), (C,1.5) and (D,1.82). The discrepancy in (B) can be accounted for by the average length of the sentences in it. More telling is the figure for (C) which is actually lower than the written work. Use of intonation to denote new sentences can account for this. The figures for the words/pause (B,7.94), (C,8.35) and (D,7.78) tell the same picture.

Deliberate pauses are another matter. They are consciously injected into the discourse to elicit a response and are prominent either just before or just after a punch-line. You can tell this is so because they appear in the same places in the book and in his acts. For example, 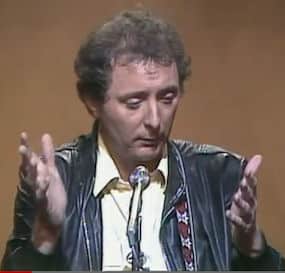 The pauses in the middle of the sentence ‘-‘ and ‘(.)’ are used for build up. It is important also to note here that pauses at the end. In the book his sentence ends and starts a new paragraph. In (C) he pauses to prompt audience laughter. However in (B) he waits a full three seconds for a response and is completely thrown when he doesn’t get one. You can tell this from line (B,16) which continues,
"psychopath (J.3) and I I (1) they (.) they say that…"