This article was started as a reply to a Facebook post, one asking for better grammar. It quickly escalated, and comments were turned off soon after. Still, it gave me material and thoughts for this post, though it wasn’t shared there.

For those annoyed with the OP, remember life is never that simple.

Certainly, there are plenty of people that will snarkily comment on poor grammar – while being obliviously ignorant that people like me are reading it and rolling there (sic) eyes at all the errors in the troll’s comment.

My grammar is excellent, possibly even exceptional, but I still use software like Grammarly to catch things I miss. I also roll my eyes at Grammarly for the stuff it misses. I read books like My Grammar and I, or the delightful Eat Shoots and Leaves, and more authoritative tomes like Strunk & White’s The Elements of Style – for fun. Something my university educated daughter finds mind-boggling.

As a child, I needed helped (SIC) with dyslexia (I’m told). Yet by the time I was in high school I was reading dictionaries, cover to cover, while all the other teenagers where (sic) smoking behind the gym hall, or playing penny toss in the tennis courts. (And yes, I was bullied in school for being the weird kid).

For all that, I make mistakes all the time. Miss things: apostrophes, inconsistencies with periods, repeating words words (sic) and so forth.

That said, for the most part, I can spot a grammar mistake at 30 yards. It can literally ruins (SIC) books for me.
Wife: “How was the novel?”
Me: “There were spelling mistakes on three pages, two in the same chapter.”
Wife: (rolling her eyes): “You circled them, didn’t you!”
Me: “Emailed the publisher too, yes”.

Reading a “Dummies Guide to…” and underlining the errors. Forget that I bought it to study psychology, or programming, all my brain sees is: “How can I trust you now?”

I struggle with university papers because I obsess. Overthinking doesn’t help, but I will hold back a paper to the last second, or ask for extensions because I’m tied up in knots with anxiety – because I can’t decide whether or not one sentence is better with our (SIC) without a comma. Or I’ll rewrite whole sections because one word fits better, or doesn’t.

I play World of Warcraft with a Norwegian friend, and for years I’d (in a good-natured way) correct his English spelling and grammar. Openly. Now his English grammar is better than his native Norwegian grammar, and he mercilessly pick (SIC) up on any errors I make.

Which takes us to the main points.

Firstly, not everyone is English. Trolling my friend aside, you can’t expect, for instance, French or Swedish nationals to be aware of all the rules and nuances of English. What you have to remember is they aren’t showing you their poor grammar, that (sic) are showing you they can speak at least two languages. Fluently.

Secondly, they (SIC) are disorders like dyslexia, which making (SIC) reading and writing problematic.

Thirdly, I find, the level of grammar among English – especially those under 30 or so – is awful. I blame the education system. I cannot tell you how mortified I was when I was told by a teacher that Proper English doesn’t matter as long as they get the meaning across.

Fourthly, a lot of people just rush comments, don’t proof-read, and don’t care in any case. These are usually the same people that wave the ‘Grammar Nazi’ banners because they know they are in the wrong and don’t like being reminded.

Fifthly, there are people – like me – that find spelling, punctuation and grammatical errors genuinely uncomfortable. Most people won’t ‘get’ this, but meeting the wrong their/there/they’re or to/two/too or a instead of an (etc.) in a short comment post is like driving along and having a seagull’s massive poop splatter across your windscreen. It is that jarring. Any meaning in the comment is lost because your brain is rudely jolted to a stop. 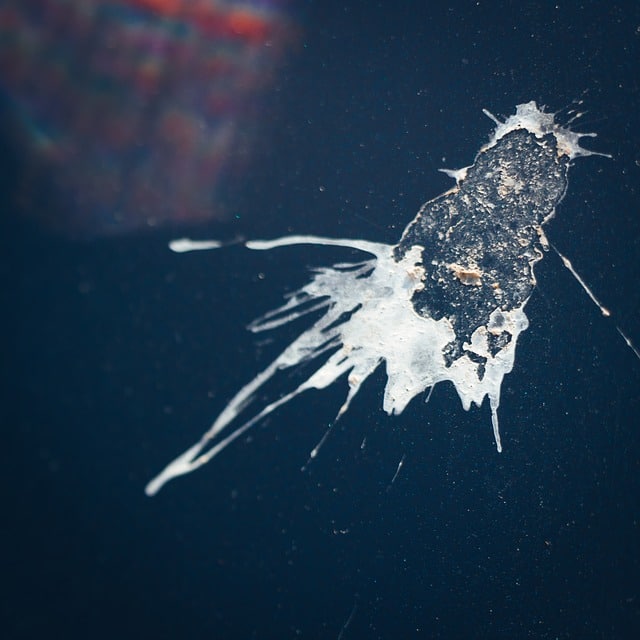 Mostly, for myself, I don’t comment on poor grammar because it’s rude. The only time I will comment is for memes. It annoys me no end to see someone go to the trouble of loading a photo into a design package and not even bother to check their work.

IT’S ONLY FOUR WORDS, AND YOU MADE THREE ERRORS!

Suffice as to say I have a rule, broken only once, that I will never share a meme with poor grammar.

Which is a final point. Potential rudeness aside, is (SIC) should be remembered that while struggling to write proper grammar is a real issue for some (e.g. those with dyslexia), the converse can also be true. It is also the case that, for some, reading poor grammar is also a real issue (e.g. some aspects of OCPD / Ankanastic Personality Disorder).

As an addendum, including the intentional (sic) and unintentional (SIC) errors, I ran this first draft through Grammarly. It flagged 18 alerts:
4 spelling
4 grammar
5 punctuation
2 fluency
2 variety
1 vocabulary

Of these:
Some punctuation was corrected (commas or Oxford commas added or removed), some words flagged (SIC) that I missed on the first reading, and a few other changes made to improve readability. Some were false flags by Grammarly, hence the need for manual proof-reading as well.

If you can appreciate the time and effort put into this comment – which will only be read by a few and forgotten by all tomorrow – you will get an inkling that for some people a simple misuse of there/there/they’re is not so simple. 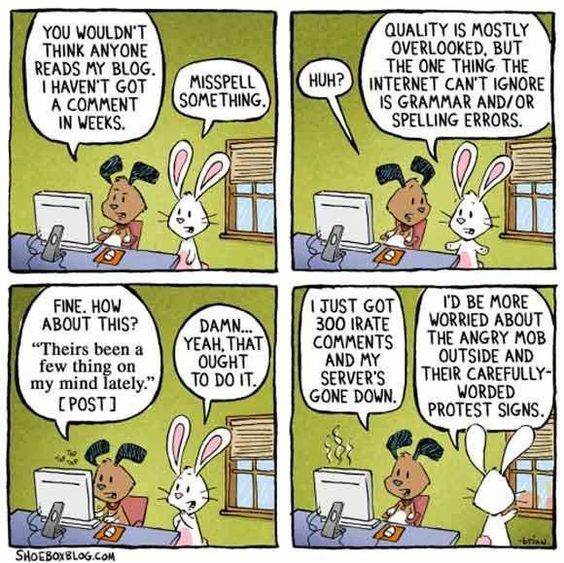 Here are some of the comments, which can be divided into groups like snarky, trolling, supportive, and hurt or offended. I will refrain from commenting on and correcting them. (But, just saying, an ellipsis is only 3 dots…)

U kneed 2 b mor pacific @ gettin ur poin akros

Its a all to common put down that the later posts within the thread reinforce the point Ive made. If you don’t suffer with the issues I do of course you won’t but for me and others for years these types of comments are used to put us down and make the person making them feel the better person.

I no what your saying its very annoying.

My own view is that it is about standards, as Mr. () said- but, on social media, we are in charge of our own standards not the dictates of others…
The flip side of that is you will be judged by poor grammar, whether you like it or not. Individuals are arbiters of their own grammatical efforts as well as their own thoughts when reading others.
There’s no need to get worked up either way.

It drives me mad. I sometimes have to read something a couple of times for it to make sense. You can also guarantee that the punctuation will be non existent or incorrect too.

>> it’s Facebook not a dissertation! Your obviously not very bright if you can’t understand Facebook banter without correct punctuation!
You snobs make me sick!

Does it really matter, as long as people understand.

I really don’t care, that just makes them shallow.

My own view is that everyone should make an effort. Even if you have dyslexia or other conditions which make typing difficult, use autocorrect, try and read through and edit what you write; it only takes a second and given that up to 8000 people and more can see these posts it only seems polite to do so.

I find misuse use of those words really annoying – never more so than if I look back at one of my own posts and see that I’ve got it wrong. How do they slip through? It’s just as well no-one mentioned apostrophes – d’oh!

I have to edit most if my posts anyway.
Big fingers,small keypad. Nasty manic spellcheck..
Lazy not to edit bloopers.. ()

Going to sound horrible and I don’t care, everyone who thinks the comment was overdue, everyone thinking its sooooooooo easy, I hope you get struck down with a condition like some of us have and find out just how it feels to be put down for it, to see posts by people who clearly think they are better then you because of it, trust me your going to feel like total shit and rightly so.

> Excuse me. We don’t feel we are better than you. We know that the majority of people are perfectly capable of correct spelling, punctuation and grammar l, but just don’t take the time to read their posts before hitting the send button.

Used in brackets after a copied or quoted word(s) that appears odd or erroneous to show that the word is quoted exactly as it stands in the original.

It basically signals that yes, we know, that’s how it was, we are aware of it and are pointing it out, so don’t judge us, though we may be judging them. There are other reasons for it, usually literary devices, but that’s another matter.

1 thought on “Grammar Police: A force for good, or ill?”