Brexit? Vexit? Walk away from a bad deal!

A tale of two connections.

Unlike our government, unlike the CBI (incredibly!), and unlike most remainers (it seems), I have a better grasp on business!

Not exactly horses for courses, ‘cos I’m only talking about broadband, not international trade, but the same logic applies.

Between accepting a bad deal – or no deal, you walk away. Every time.

In my case it was my Virgin broadband package. We do have outages from time to time, but not as bad as with BT, so while there are grumbles, we are, overall, happy with the service. If – or rather when – the line goes down, you simply dial 150 and if it’s them at fault you get an automated message basically saying, “Sorry, yes, we know, Spud’s on the job, boss”. Not perfect, but realistic. I can live with that.

Also, there’s deals to get new customers. I REALLY don’t agree with the practice ‘cos it’s all arse backwards – you are supposed to reward royal customers, so as to keep them, not regularly push them to one side for the new face in town. Wiser heads are looking and thinking, “That happy bargain face will change, once the newness wears off and they are dumped on the back benches with the rest of us.”

Still, you understand, it’s a time limited thing, after 12, 18, 48 months tied to an inescapable contact you are free – BUT the price rockets up, and most people just pay it. That’s why it works. If, en mass, everyone said, “Sod that, I’m off!”, the practice would stop, immediately. Their profit structure, their business plans, their everything is based on this apathetic acceptance of this ‘way of things’. It is a form of exploitation, though no doubt the PR departments of the multi-nationals spin it otherwise.

First time I rang I got transferred to some Indian call centre who bluntly informed me we can see from the logs what you watch on TV (well that’s not creepy!), the best we can do it remove those options, drop your speed – and still charge you £71 a month.

I, politely, told her to get stuffed.

Second time I rang I gave up after an hour on time. And the third. And the fourth, I think.

Same with the web chat.

So, I changed tactics. Instead of pressing that I wanted to downgrade, I said I wanted to upgrade. Oh yes, baby, I want to give you even more money, and will sign another extended contract for that sweet, sweet Virgin connectivity. Damn but they were fast answering. And hour? No. And minute? No. They must have snatched up that phone on the first ring, “Hi, happy to help, what can I sell you today?”

Rather telling, I thought.

Eventually, after a few days of trying, I got through to retentions who politely – but firmly – said they had no movement on my package. I can’t downgrade it, ever, only upgrade, or cancel. That’s the way it is, sorry. So I cancelled.

Between a bad deal, and walking away, you walk away.

Plus.net offered 56-72 Mb/s (unlimited) for under £28 a month, with TV package upgrades at reasonable prices if I wanted them later. A saving of about £672 a year. Sure, slower, and no Sky, initially, but those were just nice to have whistles and bells. Saving nearly Â£700 a year is nicer. 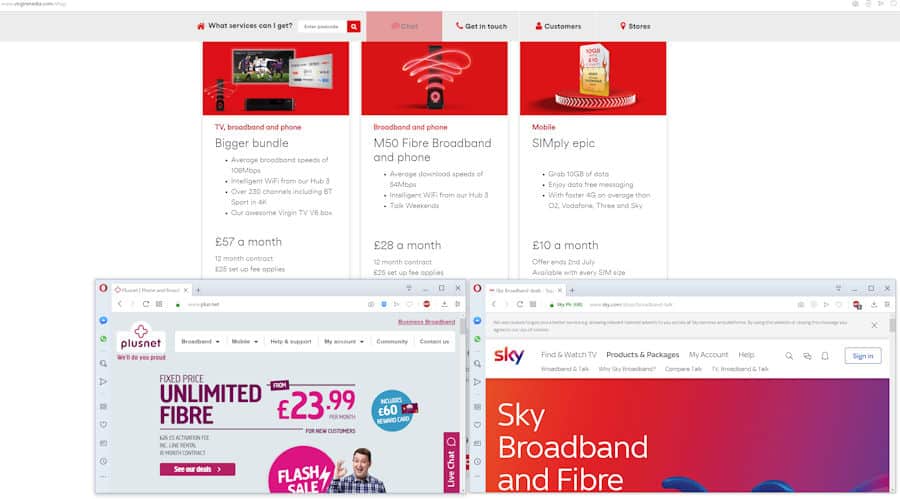 The same “deal” with Virgin – as an existing customer (albeit unnecessarily faster bandwidth) – is Â£105 a month. Not quite horses for course, but a close thing – for Â£554 a year more than Sky charge. Nice markup for flipping!

“Do come in, Sir, Ma’am, you’ll love here it with us. Just sign here, and here, and here. In blood? Yes, standard practice for the industry, not to worry. We hope you’ll stay a long time. A VERY long time. MWahahaha ha ha. err. ahem. So sorry, my manager warned me about that laugh, that should have been after the 14 day cooling off. Have a good day, y’here.”

And indeed it is industry practice. Every industry. Gas, electric, Broadband, Smartphone contracts. First the introductory offer, then a year later they up the price 25%, 33%, (glances up to the Virgin Oomph bundle), 40% or more – and hope you won’t notice. It’s a direct debit anyway, who notices, and why bother changing, too much hassle. Might as well stay where we are.

The that % discount is a lure is to hook you in. For are NOT “supposed” to leave after, no, you are supposed to pay it, to subsidise the next years crop of intakes.

Err, NO. That’s what “they” want. It really is. It’s not a law, it’s not a legally binding contact at the end. Once it has run it’s fixed length course you are free to look elsewhere. “They” would just very much rather you didn’t.

Anyway, I cancelled. And walked away. Plus.net are coming in 10 working days.

What actually happened – when cancellations realised I was deadly serious about leaving – and taking my money with me – they found a clause that allows a “loyalty discount”.

Didn’t managed to haggle a Sky cinema package out of it, but I could have had a discount if I wanted, just not enough to tempt me.

For Virgin, sure, I renegotiated, but it’s still at a profit for them, and they keep me to potentially sell upgrades to at a later day, if they are lucky. From their perspective, if they are sensible, that haven’t lost £240 a year, they have guaranteed to get £768 over the next year. £768 that absolutely would have walked.

£768 is nothing to a multi-billion pound company, but with 6 million customers… that’s £4.6 billion.

Wrangling Sky movies would have been nice, but if it mattered I’d have upgraded to it already. The extra Sky and HD channels are nice to have, but again, only had them a year, they wouldn’t be missed if I went back to a bare broadband – we still have a TV aerial, we still have Freeview. The extras on offer, nice to have, were not, in my opinion, worth an extra £240 a year – especially not when “new” customers pay so much less.

I’m still paying more than double for Virgin for broadband than I would be plus.net, and more than I’d like, but it’s a balance.

How many though would just accept it. Or back down and pay the full top price rather than accepting less for a year and either returning as a “new” customer a year later, or looking elsewhere again for a better deal.

Rinse and repeat for gas, ‘leccy, smartphone contracts, insurance and you are talking thousands of pounds a year.