Why Blizzard are short changing players with the Mystic – and what they can do to fix it!

Blizzard introduced the saucy enchanter in Diablo RoS and for some it was an instant hit, for others it remains at best frustrating, at worst a complete waste of time and, frankly, shoddy game design. Both camps are right, though I remain firmly in the camp that knows, in part, it was poorly implemented.

This a short look at the enchanting options from Myriam:

What is right about the enchanting?

It’s something you didn’t have before. It adds a new element to the game. It gives you something to spent your gold on. I’ve had one or who people tell me we should be grateful to them for it, inevitably adding, Well, if you don’t like it, don’t use it

The transmogrification option is actually brilliant. I can’t find a fault with it.

What is wrong about the enchanting?

Blizzard come up with this great idea to let you re-roll a single attribute on an item and (hopefully) make the item more useful.

Then they appear to have huddled up in a group and whispered, Let’s troll the players with this!.

Think about how it works for a moment:

You get a random drop (or craft) which is better than what you had, but not brilliant.

You take the random item to Myriam who will – for a huge, non-refundable fee – offer to turn it into another RANDOM property…

… which itself will have a random value.

And you wonder why the Vecin were run out of every town? They are snake oil scam artists and crooks! You are spending all your time farming gold and materials to get grifted.

Consider just for a moment changing an attribute on an amulet or ring. Think in terms of real and actual cost and the RoI for your time and efforts.

For each try – which will generate a random value on a random property – you will need to farm:

That’s all for one try on one item on one character… despite the fact a better example of the item has an equally random chance of dropping soon after. For instance, I spent a fortune trying to get a critical hit damage on a ‘Moonlight Ward’ – I never once got crit as an option and settled for 704 intelligent. The next day I got a better one with 79% crit chance, giving 6% extra damage overall.

Another time – one of many – I attempted to roll a socket for a weapon. You’ve been there, right? After a score of tries this is how the options looked : 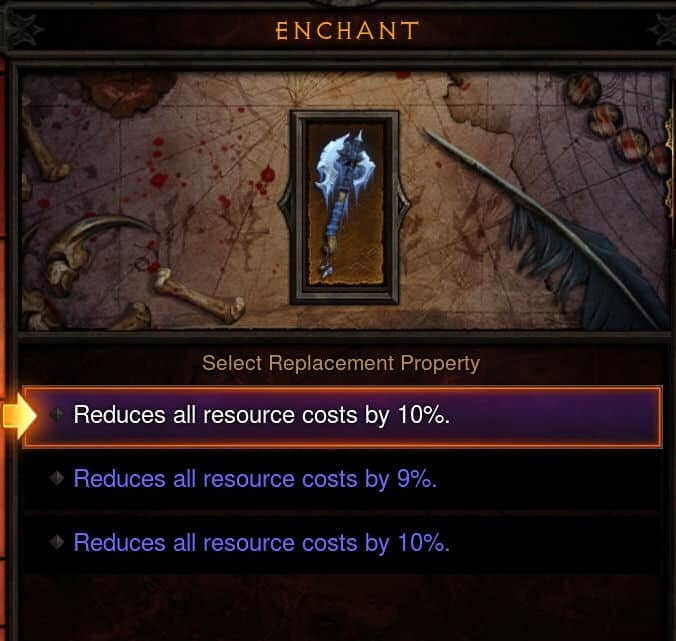 This isn’t a moan about my bad luck. The game is a grind. Absolute, pure, mindlessly repetitive grind. Yes there’s a lore aspect and story, but once you’ve played it though once (all of 16 hours) there’s nothing left but to repeat things. Over and over and over again. Better geared. Great. Play the bounties in Master instead of Normal, or in T6 instead of T1. There is no difference except it takes longer to kill anything. Period.

Then there’s the load balancing. It could of course just be ‘rng‘. You were lucky – or unlucky, but when a lot of people see the same ‘bad random luck’, then they start getting together, testing, sharing results and thinking, "You know what, the tables are weighted against us!"

By which point enchanting is – a roll on a roll on a roll that is coded to make you lose more than you win. Rather like gambling in general actually. I saw an advert on TV last night for some casino app, four blokes excited to play because "Our members have won £24 million betting with us this year"
They pointedly did not say how many more millions they had lost…

So I’m annoyed that enchanting is a poor gamble and I lost? Nope! Diablo is simply a game – I don’t bet in real life, it’s stupid. What irks me is they have a good idea and implement it in such a way that the majority of players won’t use it after getting fleeced enough times.

Consider the next image, for an off-hand. Would you risk your gold and materials over and over again to get the roll you want on the enchant you want from this scrollable 27 long list? (More fool you if so!)

How can they fix it to keep most folk happy?

I am quite adamant that Blizzard have badly failed their player base with this implementation and am frankly baffled that this got through alpha, let alone beta and live. Hopefully they will read this and give it some thought. Here’s what they should have coded:

Remember, this isn’t about reducing the grind, or about pampering ‘noob’ players that want perfect items handing them on a plate, it’s about a better game experience.

Obviously everyone wants a socket on their sword, crit on their rings, so forth, but this isn’t the reason Blizzard failed. In NOT pampering like this they, more or less, got it right and I begrudgingly agree. But in doing so they completely forgot what the game is about!

It’s about better gear? That goes without saying. Look deeper.

It’s about better damage and/or survivability? Closer, but not a distinction.

It’s about play? Stating the obvious, yet this close to the oak tree, can you see the forest?

Pull back for a panoramic and you’ll realise it is specifically about builds!

Look at all the blogs, forums, web sites, apps, even magazines and newsletter totally dedicated to theory crafting, to stats, re-rolling, BiS gear. Not just in Diablo but in Warcraft, Guild Wars, DDO, all of them. It’s about how you best enjoy playing your character, your way, to maximum efficiency – (caveat) – for the current iteration of the game.

Yes, some people play with real close friends, some make on-line friends but the vast majority will play to make progress and when you have a system that, by design, halts and even sets back this progress people stop playing – as is happening already.

In this, they have utterly failed you. But let me explain this in a clearer way (as some of that was for Blizzard’s developers and coders to ponder.)

This is a token example and can be applied to any and every class and build over the life of a game:

You have a great Barbarian. You don’t like tanking but you love melee, the upfront carnage of fighting your way forward in a spray of blood and steel, your every stomp raining fiery wrath upon your enemies. You are an unstoppable titan!

The gods look down upon this and before you can choke out the word ‘Nerf’ they have released a load balancing patch that turns your 2m edps into cannon fodder. If you were playing hard core you are now probably dead. Game over. But let’s not be negative. They may have ruined your life as a fire warrior but lo and behold they realised that lightning attacks needed a major boost.

Rebuild and everything is fine. Nerfs happen, you can get over this, again. You just need to replace all you gear and/or re-roll everything from fire damage to lightning.

And THIS is why the enchant option fails and where it needs fixing.

Ignoring the time factor, which can roll into hundreds, thousands of hours, the chance nature of drops and storage limitations do not allow for you to have multiple builds for your favourite characters unless you religiously only play one class, in which case nerfs will probably send you into apoplexy!

So, this is why enchanting needs a complete overhaul, to let players realistically experiment with builds that suit the way they want to play, factoring in game balance.

How would I manage this?
Simple, a sliding scale of costs to turn a specific least wanted enchant into a specific desired one.

Like in real manufacturing (and coding for that matter), everything isn’t a flat rate, nor should it be here. I would break it down into builds and cost accordingly.

At the bottom would be resource management – gold, cooldown reduction, energy regeneration, so forth.

Next would be class specific skill options and the so called burners – for instance 5-15% extra damage when using Blizzard or Seismic Slam. It would also be for primary attributes (i.e. rolling dexterity into strength).

Rising in cost would be toughness – armour, vitality, health regeneration.

Next would be socket(s) – with one price for most items (1 socket), another specifically for legs (1-2 sockets), higher again for chest (1-3) and highest for weapons.

Having established a cost base, then you look at the rolls. Myriam would offer you only two option: Keep the old property or have the single offered change. And yes, this would be heavily weighted. Sockets obviously would mostly roll a 2 on 1-3, so let’s consider the one most people want: critical damage 50-100%. Ah the joy of getting 100% crit. Standard bell curve on rolls but step by step you could do it. In might cost you a billion gold but in time you could. Which of course is why I’d also code in a blocker. In return for guaranteeing that you will get the property you want you’d only get 3 tries to get the value to want as well. After that the item would not only be bound to your account it would also become fixed at that point. She couldn’t enchant it further. Which is how it should be.

I did say option one at the earlier in this ramble. So:

Actually this would essentially be the same, just keeping a greater degree of randomness, thus:

Actually that is, in simplified terms, just what they do, but in a chaotic way. I would focus the results such that the group would be health rolls, class abilities, resources or general damage – and not the horrid mish-mash where the result can be and often is effectively useless.

What are your thoughts, feelings on the matter?