Further to my post on the Epson V700 scanner I was window shopping at Dixons Online and saw they ‘Tweet’ too, as they’ve just joined it themselves. Anyway, what’s the first thing I see but a link to a £20 discount for the stuff I was ordering. Go Twitter. I laugh at the people who say Twitter is useless!

Addenda:
Rather a LOT miffed with Dixons at the minute. Paid an extra £5.87 for next day delivery (instead of the standard 3-4 days) – and they have flagged it for delivery on the 25th, a full 8 days later later. The scanner I’m not so bothered about, but our Hoover is playing up and the carpet is in dire need of a clean about now. Aaarrrghhh! Running around to cancel the piggin’ the order and either re-order it, or order it elsewhere. Patience sadly is not one of my virtues.

Addenda day 2
Turns out, technically, is was my fault – but the error merely show how very poorly Dixons are when it comes to customer orientation. The gits are too busy focusing on offering credit and extended warranties to deal with the little details that matter and make a company stand out. Anyway, I paid extra for what I thought was the premium next day delivery, yet for some really inexplicable reason they don’t offer it. What they offer is a delivery slot AT LEAST a week later.

On top of all this, far as I can tell, they took the money out of my account for the order AFTER I cancelled it and, chasing it up, they need another 48 hours to return it. ********! It takes merely seconds to authorise a chargeback. Claims of needing ’48 hours and ‘four working days’ are effectively legalised fraud, an administrative scam to unfairly hold on to customers money while they earn interest on it on the bank.

As it happens I have re-ordered it from them using the 3-4 days delivery schedule, but I am REALLY not happy about this. If I could have found it at better prices – and in stock – I’d have bought it elsewhere in a heartbeat, but at the end of the day they had it in stock and up to £160 cheaper than other online stores I normally use. I doubt Dixons will ever, ever get customer loyalty from me – and from the majority of shoppers. Loyalty, like respect, has to be earned.

I could have waited a week or two and bought the items elsewhere, saving yet another £40 to £50, but long stock times make me nervous as I’ve seen far to many companies taking orders and going bust. In situations like this unless you pay with a credit card (and not a debit or charge card), when it comes to recovering your money as far as the insolvency auditors are concerned you are right way back of the queue behind the Customs and Excise, the VAT man and tax offices, the banks and other ‘preferred creditors’. If you get 1p in the £1 back you are lucky! 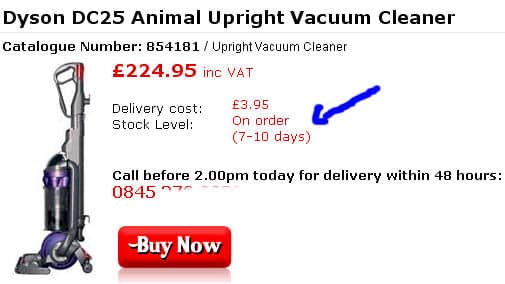 To my thinking, it’s easy to have the lowest price on the web – if you never of stock of that something!