The state of parliament and the Brexit coup d’Ã©tat

I contend that the current House of Commons is filled with lackeys of febrile wit. That being so, who is pulling all the strings?

The answer, at least on a gross level is obvious: ‘big business’ multi-nationals, the EU, the banks, ‘the establishment’, the media, lobby groups on behalf of all the previous. No shortage of people, companies and organisations to point fingers at.

A better question is how, and why.

Again, the answer that jumps out is greed. Pure, naked greed, by MP’s.

I would add that it appears, over the years, election by election, MP’s (the one’s not already corrupted) have been replaced by lackeys, by ‘yes men’. By weak-minded and, most importantly, controllable people. By often well educated individuals who are otherwise lacking in good sense and intelligence, backbone, moral fibre, honour and integrity. The impression is they don’t have to be stupid, just slow-witted enough to be pliable, cooperative, and easily manipulable.

Self before party, party before all, ‘cos party protects self. Thus they are bound.

As I posted to an MP today:

Highest respect to you, Steve Baker, but parliament is filled to the brim with dullards. With intellectual minnows that, with little to no factual evidence, see themselves as big pike in a little pond.

For example, consider the Fixed-Term Parliament Act (2011). The Act specifies that early elections can only be held if at least 67% (over 2/3) of the House agrees. Or in the case of a vote of no confidence (and no alternative is confirmed).

The Act was put in place by a Conservative-Lib Dem coalition. By a minority government that, to avoid a hung parliament, was forced – against better judgement – to beg for support, because they didn’t have the numbers to, you know, govern. Rather like now.

Yet – and this is important – they lacked the intelligence, will and foresight to add a clause to the Act such that:
“in the event of the government losing its majority, they may call a general election.”

Now – by law – due to numbers, a coalition of unelected minority parties (e.g. Labour, SNP and the Lib Dems) can keep control of parliament until 5 May 2022. Or come to an accord and take over the business of government completely, replacing you, while the entire country seethes.

The power the shadow parties now control, with the aid of a corrupt Speaker, the Tories GAVE to them. All because of hubris. Thus were the Conservative party, in their thirst and greed for power and control, duped by the Liberal Democrats.

Or, more recently, consider Labour’s Rebecca Long-Bailey, Shadow Secretary of State for Business, Energy and Industrial Strategy, who, in all seriousness, stated on national TV that:
“Taking â€˜no dealâ€™ off the table wouldnâ€™t damage our negotiating position because I don’t think the EU wants no deal!”

In more visual terms, the silly woman is arguing that they (the EU) have a gun pointed to our head, a gun we (Labour) supplied and loaded for them. We (Labour) think they should keep the weapon aimed, hammer cocked, to limit our choices to that of having no choice.

Or consider Labour’s Emily Thornberry, who was a barrister and is now the Shadow Foreign Secretary. She was recently ridiculed for admitting Labour’s Brexit policy is to negotiate a new deal and then campaign to REJECT it in a second referendum.

The Daily Mail, who are now firmly anti-Brexit, were as exasperated, saying “she would negotiate the ‘best Brexit deal for Britain’ if Labour wins an election but would then campaign to reject it and stay in the EU”

Repeated below here, but note how, at the end in a separate interview inside the HoC she states, “We are seizing power.”

Now consider Boris’s ‘new deal’, which in bulk in still Theresa May’s thrice rejected Withdrawal Agreement. This is what the Lord Justice said about the state of parliament, and the deal:

Jacob Rees-Mogg, formally a ‘Spartan’ once agreed with Nigel Farage that it was the ‘worst deal in history’. Now, on his Facebook page, he declares it is ‘Superb’.

That: “The Prime Minister has negotiated a superb deal for the UK.”.

Similarly, in a video post, he reaffirms that he is really pleased with the deal.

Presumably he now believes that we (the public and all MP’s, of all parties) should all agree to it, immediately. Don’t read it, just agree. ‘K, thanks.

So, what has changed? A few cosmetic edits? Or that instead of being on the back bench JRM is now a minister, with the full title of ‘Leader of the House of Commons, Lord President of the Council’.

Suffice as to say the top several hundred, or rather several thousand comments and liked comments all echo these sentiments:

“I’ve honestly lost all respect for you. You and Boris have sold us out.”

“Jacob….you have sold your soul to the Devil ðŸ˜¡”

“Yes it is a wonderful deal for the EU.
I am sure they are very happy.
Crap for us but hey
Shaft the public.
I am never voting Tory ever again. …”

What cost their treachery?

As I commented on MP Steve Baker’s Facebook page:

The public isn’t stupid; they know this is substantially May’s WA. Anyone with an ounce of sense knows that a legally binding contract, one with 600 pages of baffling legal-speak, is hiding an array of catches, traps and snares.

In your heart, I’m sure you know it’s a terrible deal. Ian Duncan Smith knows it’s bad comprise to get Brexit done. Other prominent ERG MPs have expressed reservations. Even the Lord Justice all but said it was garbage .

As for JRM calling it “superb”… let us remember that Judas attempted to return the money he had been paid for his betrayal to the chief priests and committed suicide by hanging. Forever now, in my mind, he will be Judas Rees-Mogg.

A few of the MPs, like yourself, Sir John, Kate Hoey and a score or so others have held onto your ‘honourable” status, the rest have leapt, hands grasping to capture the 30 pieces of silver dangled by the EU.

Interestingly, I found the picture below on Facebook too, and while I’m NOT accusing Mr Rees-Mogg or any one person in particular of corruption*, I could only stare at the photo, nod to myself and mutter, “Yep, that’s about the size of it.”

*(Please note the distinction between ‘corruption’ and ‘corrupting’, as in Bercow ‘tarnishing’ of the position of Speaker of the House, which is another matter!) 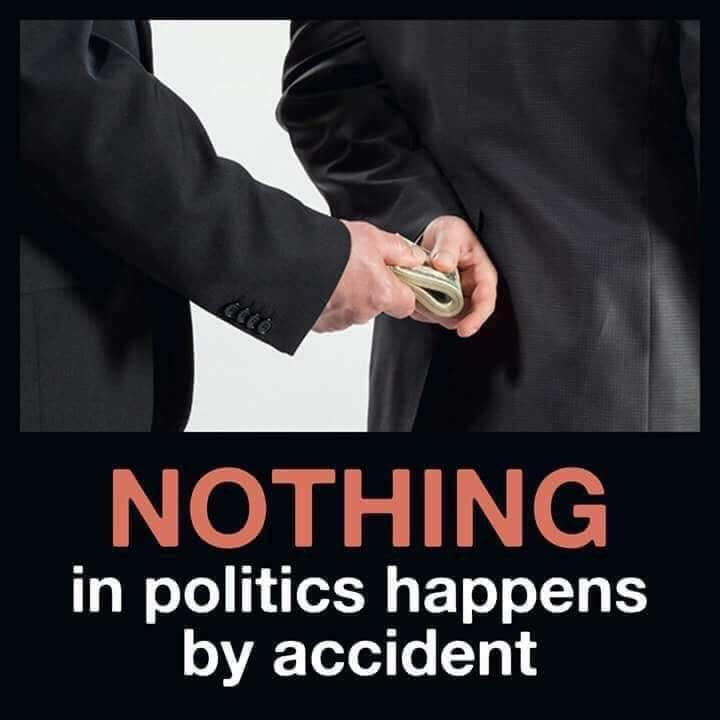 Brexit is no longer about Brexit, it’s about survival (of the MPs). All the masks are off, we can see the majority of MP’s for what the really are (money-grabbing parasites), the EU for what it really it.

But despite how awful the EU has been, and is, I don’t actually blame them. They are how they are, we knew this, this is why we voted to Leave.

If Brexit is achieved, remainers become pointless – and the HoC is full of remainers. Remainers who realise that in the event of a general election most of them are out of a job. They cannot and will not give voters that power over them!
Lib Dems (Bollocks to Democracy)? They have one message: cancel Brexit. They know voters will turn on them, even remainers.

Labour? They stood on a manifesto of leave. They are buggered! Polls might say otherwise, but I live in the north and I’m telling you, they will be hammered. And they know it.

SNP? They keep bleating about independence (from the UK) – so they can be dependent on the EU… They are going to hurt in a general election.

Tories? They gave us Theresa May. They gave us Boris peddling May’s deal. And remainers hate them. There are in for a kicking as well.

So, here’s the problem: The longer we are trapped in this carousel, the more likely Brexit is cancelled, like the referendum never happened. At which point, or not long after, the Lisbon treaty kicks in, MPs are appointed instead of elected, and we are stuck with them, milking the system. Just like parasites.

But that can’t happen, yet, because we are negotiating to leave. But we can’t leave “without a deal” – and parliament can, have and will continue to vote down and any all deals – even deals the opposition make – until Brexit is cancelled.

Just to remind you:

As it stands, and until 2022, MP’s, mocking voters, tearing up democracy, cannot be removed.

Unless and until there is a general election they can keep drawing over Â£80,000 a year in wages, keep claiming up to around Â£120,000 a year in expenses, keep turning up on shows like the BBC’s Question Time (ch’ching, nice fat appearance fee, thank you), keep going on jollies to Brussels (behind voters backs), and so forth.

We, the public, cannot vote them out of office without a general election; they are stuck there like limpets, only a bloody sight harder to remove.

The government (i.e. Tories) can’t call a general election as it need their permission, which ain’t going to happen.

So here we sit, day after day, extension after extension, year after year.

It will not end well.